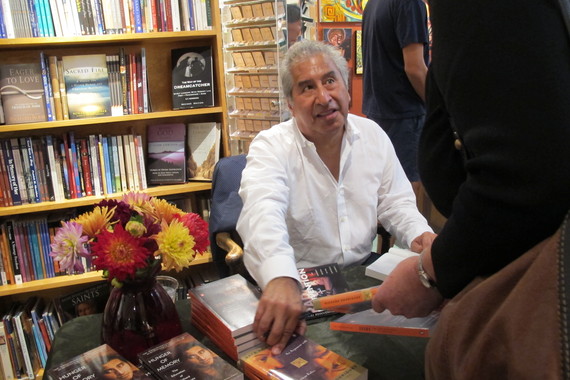 "Why do you believe in God?" Kaya Oakes wanted to know. The question was her opening salvo to fellow author Richard Rodriguez on a sunny afternoon in the Temescal neighborhood of Oakland, California.

The occasion was a public conversation double-whammy book signing sponsored by the Sagrada Sacred Arts bookstore.

"Do I believe in God?" Rodriguez mused. He didn't seem to want to answer the question on its own terms. Instead he said, "I feel a commitment to Jesus and the life of Jesus."

Then he proceeded to tell a story about Mother Teresa.

In 1987 the diminutive Catholic nun and missionary paid a visit to California's San Quentin State Prison, Rodriguez said. There she addressed a group of painfully respectful death row inmates.

"If you want to see the face of God," she told the men, "look at the prisoner standing next to you."

Then she added, "I see the face of God when I look at you."

Oakes would be signing copies of her Catholicism-to-atheism-and-back-to-Catholicism memoir, Radical Reinvention: An Unlikely Return to the Catholic Church. And Rodriguez, also a Catholic, would be signing the paperback release of his 2013 essay collection, Darling: A Spiritual Autobiography.

At Sagrada, surrounded by candles, crystals, meditation bells, icons, and, of course, books, Rodriguez signed copies of Darling. When my turn came to to get my book signed and chat with the author, the conversation turned philosophical, and Rodriguez repeated Mother Teresa's words, "I see the face of God when I look at you."

I was touched. I studied Rodriguez' lovely, aging face for a moment and thought, "Yeah. If God had a face, it would look pretty much like that."

A version of this essay first appeared on BarbaraFalconerNewhall.com, where Barbara riffs on life, family, books, writing, and her rocky spiritual journey.