When Utah mom-to-be Ashley Gardner went to the doctor's office for her first ultrasound, she was in for quite a surprise. After eight years of trying to conceive with her husband Tyson and ultimately succeeding through her first round of IVF treatment, Gardner learned that she was expecting quadruplets.

Through the fertility treatment, two eggs were implanted in her uterus, and both of them split. This means that Gardner is now carrying two sets of identical twins.

A photographer friend, Alicia Hallock, was on hand at the ultrasound, and she captured the parents-to-be's priceless reaction to the news:

"I've never felt so many emotions all at one time," Gardner told The Huffington Post in an email, adding "I told the girl to look again!"

Dr. Alan Penzias, associate professor of obstetrics, gynecology and reproductive biology at Harvard Medical School told CNN that the odds of having two sets of twins in one pregnancy are about 1 in 70 million.

"Some people have to do IVF several times to even get one baby," Gardner said, "And to have it work and get quads on the first try with my infertility issues was unreal."

Friends and family have rallied around the couple to show their support. The expectant mother's sisters set up a Facebook page for the family, and organized an auction to raise money for "The Quad Squad."

A later ultrasound revealed that both sets of twins are girls, so in a matter of months, the Gardner family will be welcoming four little daughters. The mom-to-be said that she and her husband are "ecstatic!!!," adding "These girls are going to have one over protective daddy!"

Needless to say, the Gardner family has been dealing with a whirlwind of emotions, but as their birth announcement shows, they've kept a sense of humor about the surprising news. 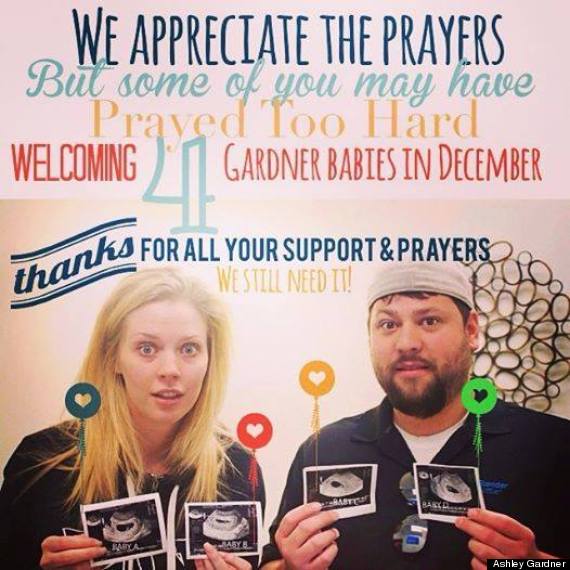