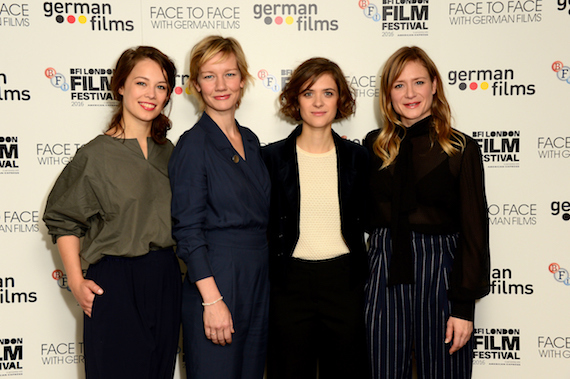 It is known in the film world that all movie stories revolve around seven basic plots. And that more than a good half of those plots were first penned by William Shakespeare, the original filmmaker extraordinaire of the theater.

As the granddaughter of a man who translated the Bard's work into German and asked for his ashes to be scattered on Shakespeare's grave in Stratford-upon-Avon, England makes me feel like I'm home. Intellectually and emotionally home.

During the recent BFI London Film Festival, I was proud to find a page mentioning my grandfather, Hans Rothe, on their website. In fact, there is hardly a day that goes by in my life when I'm not reminded of how happy I am to be his granddaughter. And how although his own strong political convictions exiled him for life from the land where he was born, for obvious reasons, I can today once again feel honored to be in part German.

It is thanks to the London Film Festival, that I have reconnected with my German roots. Through a wonderful initiative called "Face to Face with German Films" which introduced London audiences to Foreign Language Oscar submission Toni Erdmann and Venice favorite Frantz, and got a few select members of the media to chat with four powerhouse, young, fresh new faces of German cinema.

Sandra Hüller, the star of Toni Erdmann, Paula Beer who won Best Newcomer at the Venice Film Festival for her role in Frantz, Julia Jentsch who stars in 24 Weeks and Liv Lisa Fries of TV series Babylon Berlin reminded me of what being a German woman is about: no nonsense, a great sense of self esteem, a very essential sense of style and behind their good looks, a powerful brain. I gush to admit that these four young, beautiful, talented women made me feel happy of my heritage, through and through.

I asked each of them a question or two, and within their answer found the essence of true grace.

What helps you get into a character?

Sandra Hüller: Time, I just need some time. I tell you what I don't need. Normally I don't like to meet people who live the kind of life that the character is living but sometimes I have to do it for technical reasons. I don't like so much psychological work or biographical stuff. What I really like is to react on the situation that is actually there while we are doing the film or the theater rehearsal. I always have the feeling that the more I am prepared, the less I can react on what is actually happening.

What do you think contributes to the success of German films?

Liv Lisa Fries: I think what is interesting is that we are pretty serious, we have discipline and things like that. What I like for example with Toni Erdmann, which is the success in German movies right now, they really try to seek the truth in a way. They are searching for something. What I love about these kinds of films is they are deep and light at the same time, close to each other.

Is cinema then the best way to understand cultures -- better than a book or a news report?

Julia Jentsch: For me the best thing, is my work. When I'm doing my work somewhere else, I really get to know a lot about other countries. It's not just traveling but you're working with people from other countries. I'm very thankful for these challenges. Movies or books? Movies can be manipulating, because in the book you also have your own film, and can decide, do I want to read the next page -- while a movie really gets you right into it. Film is the easiest way to get you to other places, other countries, other cultures. It's a wonderful way. The easiest, more direct way.

Do you think cinema is a way to understand 'the Other', to bridge cultures, to comprehend what is sometimes incomprehensible to us?

Paula Beer: Yeah, because you see living people from the country, even if they are portraying another character, you feel how they move... It's different if you see an American actor or a German actor, it's so different. You really get the kind of living, through cinema.

What would be a dream project for you?

Paula Beer: Sometimes you get so surprised by a script and think "wow, that's great!" and it's even stronger than your imagination... I don't know, I'd love to do something like Bonnie and Clyde. But I believe a project finds the actress, not the other way around.

Liv Lisa Fries: It's always really difficult coming up with this answer, because for example, I just played a woman who suffers from Cystic Fibrosis, and I couldn't really say to you, "wow that's my dream project, it's incredible", but I really enjoyed playing her. I couldn't really answer...

How important is your personal style to who you are as an actress?

Liv Lisa Fries: It's important to find some kind of expression through clothing. I often feel if I wear something "cool" that really helps me. When I feel cool, it's cool for me, I don't need to feel sexy.

All images courtesy of German Films and Organic, used with permission.