From the farthest reaches of the internet comes a Facebook group called "Catarchy," wherein anarchists post photos of their cats -- along with messages about their cats' devotion to undermining the hegemony of the state.

And why not? "The cat is the best anarchist," wrote Ernest Hemingway. And while some cats set their sights on political office, others surely want to burn those offices to the ground.

"My darlings enjoy fighting the oppressive nature of society and sleeping," brags one member. Another cat is introduced as Emma. "I picked her up from the humane society yesterday," writes her owner. "Her hobbies include subverting capitalism, fighting the patriarchy and playing with string."

Some members of the group come seeking advice about how to meld idealistic concerns with the day-to-day realities of living with a lawless feline:

"Anarchists, how authoritative are you towards your cats? Did you have them spayed or neutered? Do you let them outside?"

Questions which provoke surprisingly practical, if also unusually thoughtful, responses, that may reveal the limits of freedom, such as "I fixed my Lola because she pissed all over the house when in heat, when she was 2. No, she can´t go outside, unless she learns to fly from my 9th floor apartment."

Catarchy is an open group with almost 1,200 members and lots more postings like the above -- and while an angry black cat is an anarchist symbol, the cats on the site, some described lovingly as "little tyrants," tend toward the adorable. (There's a cute pig in a sweater, too.)

What you don't find on the group's page? Pictures of dogs. Which stands to reason, since everyone knows dogs, so eager to uphold authority, are statists. Except this one.

Update, March 20, 2014, 9:40 p.m.: We spoke with the administrator of the Catarchy group, a person going by the pseudonym of Constable Homeaux who has been a self-described anarchist "for about eight years now."

The Catarchy group started, Homeux explains, with the purpose of providing a "supportive environment for people to talk about their cats and look at pictures of other anarchists' cats." Which they do. Willingly and with free and informed consent, in droves. (There are nearly 1,600 Catarchy comrades, as of Thursday evening.)

Which raises the question: Why are anarchists so interested in cats?

"I think cats are appealing pets/animal companions for anarchists because it is more or less impossible to coerce a cat into doing anything it doesn't want to do. They have a strong individualistic streak," says Homeaux, "but also practice mutual aid," or cooperation.

And of course, Homeax also has a black cat named, appropriately, Bakunin. 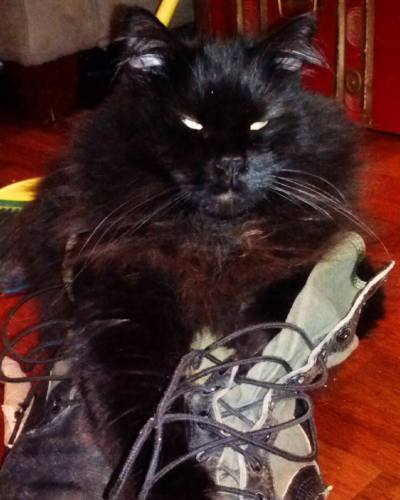 "I'd say he's more the working class solidarity type," says Homeaux. "Whenever I leave to go to work he sees me out the door, and greets me when I return. He also went to an Occupy rally once in a backpack."

Is your pet involved with politics? Tell us in the comments -- or get in touch at arin.greenwood@huffingtonpost.com