Mark Zuckerberg promised "something awesome" for Wednesday's conference. What Facebook delivered is a trio of new chat features, including the earlier reported Skype-video chat integration.

The new features include a redesigned chat interface, group chats, and the aforementioned video chat, all explained on Facebook's blog.

The group chat feature will let users chat with multiple friends at once by selecting "Add Friends to Chat." According to Facebook, 50 percent of users are using the Groups feature, for things like co-ordinating events. Users can add friends that are not online at the time, and those friends will receive a summary of the chat later on. The feature rolls out today.

The chat redesign takes into account the size of a user's browser window and adjusts accordingly. Zuckerberg noted that users have found it difficult to start chats with the previous design. A new sidebar appears when the window is large enough and lists your most-messaged friends, even ones who are not online. A simplified chat tab will give users "one-click access" to chatting with friends. The new chat design will also roll out today.

Video chat, which the company collaborated on with Skype, lets users click a video call button at the top of their chat window in order to start the call. Users can also leave video messages for people who aren't there. Once a user clicks the video chat feature, a plug-in is downloaded to enable the call in "ten to twenty seconds." The feature will roll out to everyone in the next few weeks, though users can get on earlier if they're eager by going to Facebook.com/videocalling. It is not yet available on the mobile app.

"We have a very longstanding relationship with Microsoft," said Zuckerberg, who noted that Facebook had actually been working with Skype prior to Microsoft's acquisition.

Check out the slideshow (below) to get a feel for the new features. 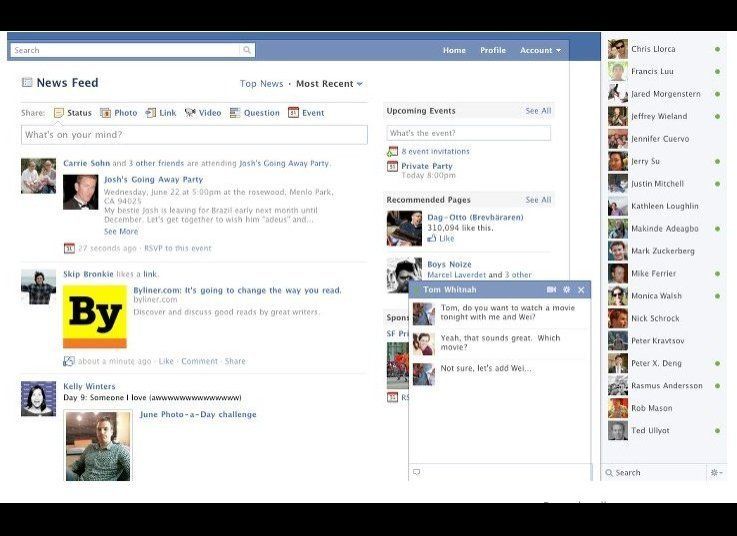