Facebook took a step closer to web domination Thursday evening with the official launch of its App Center, a hub for over 600 Facebook-connected apps that underscores the social network's growing importance as a platform for third-party companies.

The App Center, Facebook's answer to app marketplaces such as Apple's App Store and Google Play, marks the first time the social network has offered a centralized database of apps that features personalized app recommendations based on each user's interests and circle of friends.

By far the most customized of any app marketplace, each Facebook user will see a unique storefront on the App Center, with the selection determined by her interests, the apps her friends use most and which apps have the highest ratings. App Center will list only "high-quality apps, based on feedback from people who use the app," Facebook wrote in a blog post. With friends, rather than reviews, as the core organizing principle behind the App Center, Facebook is flexing its muscle as a social discovery engine and upping the value of going viral.

The App Center also emphasizes Facebook's focus on developing a more robust mobile experience for its users. The electronic storefront, accessible from Facebook's website, as well as through its iOS and Android apps, includes both mobile and web apps in ten categories, including games, entertainment, music and utilities. There's also a dedicated "Facebook" category promoting the social network's own apps (Apple's App Store doesn't include an "Apple" category. Neither does Google's, though the web giant has plenty of its own Android apps).

The social network positioned App Center as a boon, not a rival, to other app marketplaces. In a press release, the company pointed out that that Facebook sent users to the Apple App Store 83 million times in May and to iOS apps 134 million times. But if rumors that a Facebook phone is in the works turn out to be true, that may not be the case for long.

The App Center will be available to U.S. users starting June 7 and rolling out to all users in the "coming weeks." 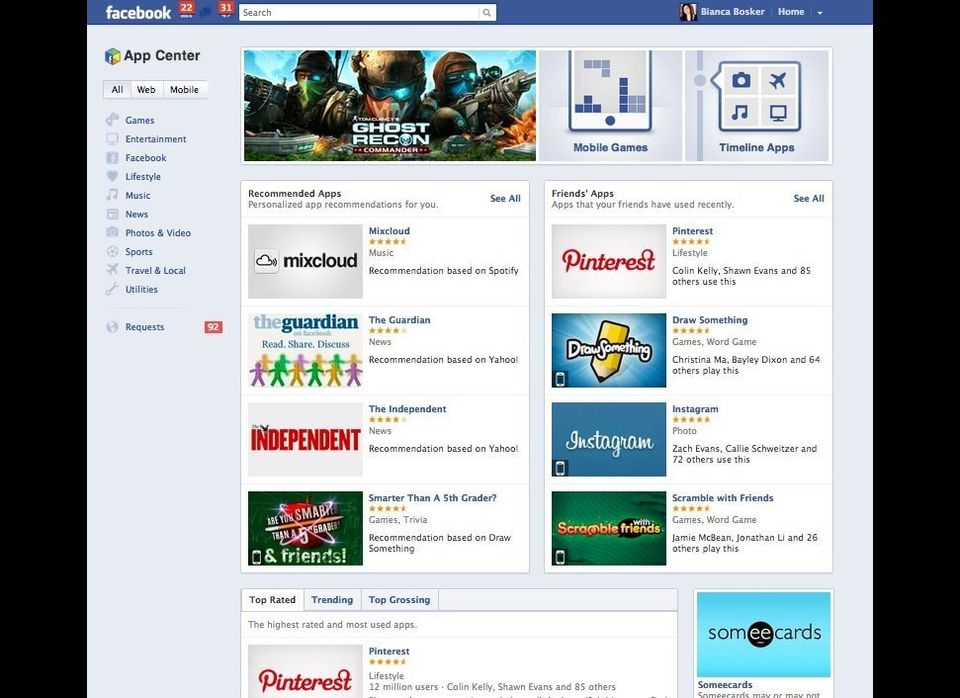