Facebook has unveiled a new feature that lets people share what they're watching or listening to without having to type or speak a single word.

On Wednesday, May 21, the site announced a new opt-in audio recognition system that will be incorporated into its mobile app in the coming weeks. The function uses a person's smartphone microphone to listen for what songs, TV shows or movies the user is currently hearing. The feature will listen for familiar audio -- kind of like Shazam -- and then give users the option to share what it finds as a status update.

The new feature is an extension of the site’s “feelings and activities” function. If you’ve turned on the feature, a small icon will appear on the screen when you tap to write a update. You can then opt to share or ignore what the feature picks up. 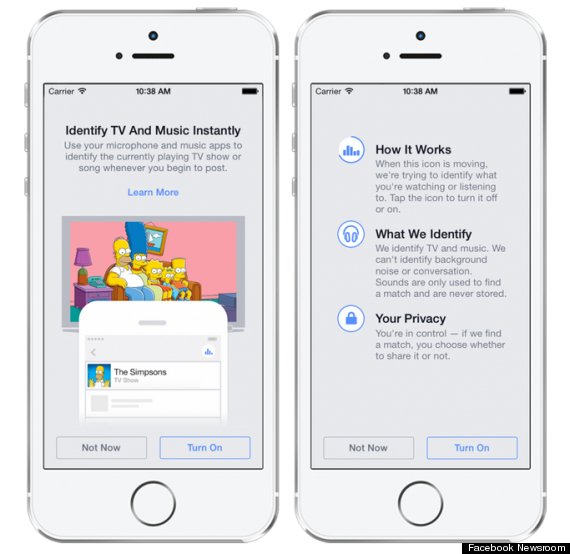 If you choose to share your music activity, for example, friends will see a 30-second preview of the song with a link to Rdio, Spotify or Deezer, Engadget specifies. For TV shows, the audio recognition system will be able to note the episode and the season of show you're watching so that friends (hopefully) don't share any spoilers.

As The Verge notes, it’s unclear at this time if Facebook’s version of an audio recognition function will surpass Shazam’s ability to recognize songs through background noise.

Facebook says it will be rolling out the feature -- to both Android and iOS devises in the United States -- in the coming weeks.