Exactly 10 years ago today, Mark Zuckerberg opened thefacebook.com to every student at Harvard. Today, the $150 billion Internet company that the little campus website would become commemorates that moment as its birthday. But that doesn't mean you have to.

Facebook pumped a lot of energy into the timing of its Feb. 4, 10th anniversary, including the release of a new iOS app and a rare interview with CEO Mark Zuckerberg. The PR effort paid off. "Paper," which converts News Feeds into an iPhone-sized magazine, was well received, while Zuckerberg came off as affable and was able to erase some of his bratty image in his talk with Bloomberg Businessweek.

But like any website -- or, really, like any big, complicated project that people undertake -- Facebook was not "born" on a specific day. It's not a flesh-and-blood person, no matter how many rights of "corporate personhood" U.S. courts grant to corporations. Like any idea, it came to fruition in Mark Zuckerberg's head (or, according to Winklevoss twins' story, in their heads) over many weeks before the first pixel of Facebook was published.

Which of these moments constitutes Facebook's "real" birthday? That kind of question assumes that companies have real birthdays to begin with. With regular corporations, the day they are incorporated has some logic. But with a company that's also a website, the calendar is fuzzier. 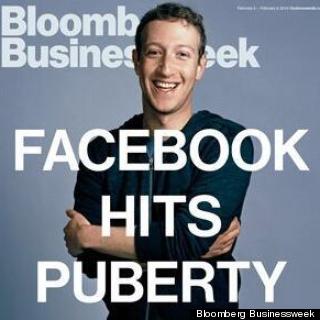 Consider Google, which has been inconsistent keeping track of its own birthday. For the first half of its existence, Google mostly used Sept. 7, 1998, the day it was incorporated, celebrating its fifth and sixth birthdays on or around that date. But in September 2005, Yahoo announced that it had indexed more webpages than Google, making Yahoo's search engine bigger, according to at least one measure. So Google announced its birthday is actually Sept. 27, offering no real reason for the change, but affording Google enough time to collect the data and announce that it had gotten bigger, too. Google has kept going with Sept. 27 since then.

Even when a birthday isn't used for a crafty PR move, people get confused. Twitter cofounder Jack Dorsey sent the first tweet in March 2009, but Twitter opened to the public four months later. The discrepancy has led some people to celebrate Twitter's birthday on March 21, while others commemorate it July 15. For what it's worth, Twitter recently has gone with the March date.

Facebook doesn't have those inconsistencies. Since at least 2009, Facebook has used Feb. 4. "We have always celebrated Facebook's birthday/anniversary on February 4," a Facebook spokesperson told The Huffington Post by email. "It is the day that Mark officially launched thefacebook.com from his Harvard dorm room."

But consistency doesn't make the "birthday" of something that never came out of a womb more legitimate. Your mother worked too hard giving birth to you for you to fall for a cheap PR ploy.

The metaphor of Facebook to a human being is easy to adopt, given our deep connect with it and the other technology into which we pour hours of our time. But making Facebook a "person" who has birthdays and goes through puberty makes it easier to forget the real humans in our lives.

It's possible you know someone whose birthday is today, and you ought to wish him or her a happy birthday. It's easy to figure out. Just check Facebook.