For a typical college student, if it didn't happen on Facebook, it didn't happen. That gives the social networking behemoth an out-sized influence on the confines of political debate, if that debate falls outside what Facebook deems acceptable discourse.

Proponents of marijuana legalization, which is on the California ballot in 2010, have hit a Facebook wall in their effort to grow an online campaign to rethink the nation's pot laws. Facebook initially accepted ads from the group Just Say Now, running them from August 7 to August 16, generating 38 million impressions and helping the group's fan page grow to over 6,000 members. But then they were abruptly removed.

Andrew Noyes, a spokesman for Facebook, said that the problem was the pot leaf. "It would be fine to note that you were informed by Facebook that the image in question was no long[er] acceptable for use in Facebook ads. The image of a pot leaf is classified with all smoking products and therefore is not acceptable under our policies," he told the group in an email, which was provided to HuffPost.

Noyes is on vacation and didn't respond to an email. A request sent to Facebook's general press address generated an auto-reply indicating that the company receives many requests and intends to respond. [Scroll down for a Facebook statement.]

Facebook's ad rules, however, only ban promotion of "[t]obacco products," not smoking in general. Since the 1970s, shops selling marijuana paraphernalia have sought ways around the law by disingenuously claiming their products are "for tobacco use only." The Just Say Now campaign is arguing the exact opposite: No, really, it's for marijuana, not tobacco.

The censorship is a blow to the campaign, which is gathering signatures on college campuses calling for legalization and registering young people to vote. "It's like running a campaign and saying you can't show the candidate's face," said Michael Whitney of Firedoglake.com, a blog that is part of the Just Say Now coalition.

Conservative college students condemned the site's restrictions. "Our generation made Facebook successful because it was a community where we could be free and discuss issues like sensible drug policy. If Facebook censorship policies continue to reflect those of our government by suppressing freedom of speech then they won't have to wait until Election Day to be voted obsolete," Jordan Marks, the head of Young Americans for Freedom, told HuffPost in an email. YAF was founded in the 1960s and William Buckley's estate; Buckley was a longtime supporter of marijuana legalization. Marks is a member of the Just Say Now board.

Aaron Houston, the executive director of Students for Sensible Drug Policy, said that Facebook was out of touch with its customers.

"Their business will suffer if they don't reverse this decision. We're way beyond reefer madness and censorship. Facebook should get with the times," he said.

While Facebook is banning the ad, a number of conservative and liberal blogs and news outlets have agreed to run it beginning on Tuesday. The Nation, The New Republic, Human Events, Red State, Antiwar, Reason, Drug War Rant, Stop The Drug War, Daily Paul, Lew Rockwell, The Young Turks, MyDD, AmericaBlog, Pam's House Blend and Raw Story are among them.

To protest Facebook's decision, Just Say Now is launching, naturally, a Facebook petition, cognizant that the social networking company often responds to user feedback. The group is also asking people to replace their profile picture with an image of a censored pot leaf.

"By censoring marijuana leaves, Facebook is banning political speech. This is unfair, and unacceptable," reads the petition. "Facebook should reverse its decision and allow the free discussion of U.S. drug policy that the country is ready for."

UPDATE: The Libertarian Party has had the same problem. Spokesman Kyle Hartz emailed HuffPost to say that after initially approving the ad, Facebook reversed its decision and censored the ad on July 23rd.

"Thanks for writing in to us," a Facebook representative wrote to the party. "I took a look at your account and noticed that the content advertised by this ad is prohibited. We reserve the right to determine what advertising we accept, and we may choose to not accept ads containing or relating to certain products or services. We do not allow ads for marijuana or political ads for the promotion of marijuana and will not allow the creation of any further Facebook Ads for this product. We appreciate your cooperation with this policy." 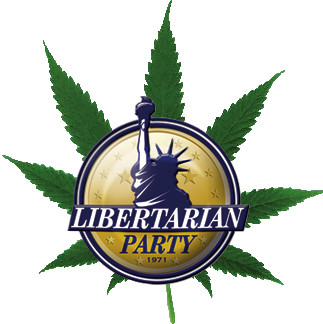 UPDATE II: Facebook spokesman Noyes says in a statement: "The image in question was no longer acceptable for use in Facebook ads. The image of a marijuana leaf is classified with all smoking products and therefore is not acceptable under our policies."

UPDATE III: Facebook objects to the pot leaf under medical circumstances, as well. As Washington, D.C.'s city council was debating how to write regulations to permit the cultivation and sale of medical marijuana, the District of Columbia Patients' Cooperative took out Facebook ads to encourage city residents to attend the hearings, the cooperative's Nikolas Schiller tells HuffPost. Facebook shut it down, though the hearings went on regardless. The ads contained a pot leaf and were, like the others, initially approved and later rejected.

"The aim of the District of Columbia Patients' Cooperative use of targeted Facebook ads was to engender community support for the DC medical cannabis law which had been placed on ice for 12 years by Congress," said Schiller. "We created the ads to target those on Facebook who are sympathetic to the subject and might be interested in coming to District Council hearings and meeting with elected officials. While we were able to organize through Facebook, our efforts were severely hampered by Facebook's continued rejection of our ads. The ads ran between between January and May 2010, with the final rejection on May 10th--the ad stated "Have you spoken to your doctor yet? You will soon be able to use medical marijuana with a recommendation from your doctor!" and contained a cannabis leaf with the DC flag superimposed over it."

UPDATE IV: Johnny Dunn writes in to say that Facebook initially blocked ads for his t-shirts, which read "Legalize Gay Pot," merging two pop-culture streams. He took the pot leaf off and they are now apparently in compliance.

Ryan Grim is the author of This Is Your Country On Drugs: The Secret History of Getting High in America