I was chatting with my wife, Mel, about a news story where Facebook censored the image of a child breastfeeding. I wanted to know her opinion. We were in our bedroom.

I was sent a clip of the story by Amy Garneran, an author at the New Orleans Moms Blog, and the subject of the controversy. Garneran wrote about breastfeeding during World Breastfeeding Week. She paid to have a graphic designed, a tight shot of a baby nursing and the side of his mother's breast, and then paid to have the image marketed to specific demographics of Facebook users. However, Facebook rejected the image, stating that its policies "disallows overly sexual images, suggestive nudity, showing a lot of skin or cleavage, or focusing unnecessarily on specific body parts." 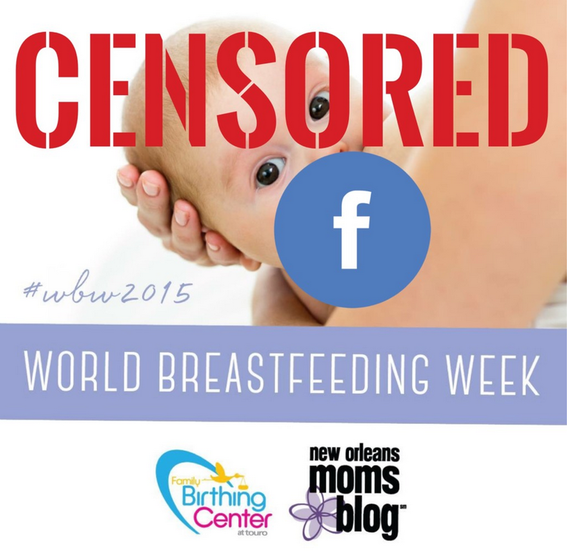 Mel and I were looking at the image on my phone.

"This is ridiculous," Mel said. "How is that sexual?"

We talked about how breastfeeding is not shameful. How it's natural and shouldn't be censored. We circled around the issue. And as we spoke, I thought about all the times I'd seen Mel hide in a hot car, or sneak away into a public restroom in order to privately feed one of our three children. I don't know why society has come down so hard on breastfeeding mothers, but what I do know is that Facebook censoring the photo didn't surprise me.

Mel thought about it for a moment. Then she said, "No. It doesn't."

I can think of few things more natural than a mother breastfeeding her child. And yet, there are a lot of people who see breastfeeding about as socially acceptable as public urination.

If Facebook had censored Budweiser for using side boob to sell beer, or Victoria Secret for using cleavage to sell underwear, that might have gotten me out of my seat. But an image of a mother being censored for using her breasts for their intended purpose didn't surprise me at all.

Its sad, really, that we as as society (America mostly) have reached a stage where the expectations of breasts are so twisted and sideways that we don't bat an eye when breasts are used to sell a car, but their real, natural, beautiful, intended purpose, has been shoved so deep into the shadows that we can't stand to look at it, so we censor it. We shove mothers into bathrooms, and cram children under blankets to keep breast from appearing too practical.

But to me, as a father, I can think of few things more beautiful than my wife feeding our children. I am in awe that her body can grow human life. Give birth to it. And then, sustain it. It's remarkable and makes my body seem about as useful as an artificial plant. When I watch my wife breastfeed, I don't think about sex. I think about love and compassion. I think about a mother physically and emotionally caring for her child.

People aren't used to that when it comes to breasts, because they have become a ubiquity on the sides of freeways and buses. Boobs are used to catch attention like a carrot on a stick, luring in shoppers.

But breastfeeding doesn't use sex to accomplish something. It's pure and wonderful, and I think it's that the conflict that makes it confusing to those who view it. And when I think about that, I realize that the real problem isn't breastfeeding, or boobs, or sex, but the fact that breasts as an image have been so twisted and manipulated by the media that anything as asexual as breastfeeding is considered untranslatable, suspicious and in need of censorship.

And honestly, I'm not sure how to fix that. Or if I can fix it, or should. I'm just some dad, sitting in a coffee shop, writing on my laptop. Perhaps it doesn't need fixing. Perhaps this is the societal norm, and it's best for us to accept it rather than try and change it, just like Facebook did when they censored that image.

What I do know, though, is that I find all of this unsettling. And I think that you should too. I think that breastfeeding shouldn't be seen as bad or good, wrong or right, but rather as essential and natural. It is something that has always been. It isn't shameful, but marvelous, and the next time you see an image of a mother feeding her child, don't shun it, or censor it. Respect it. Accept it. And maybe, together, we can change our mindset.