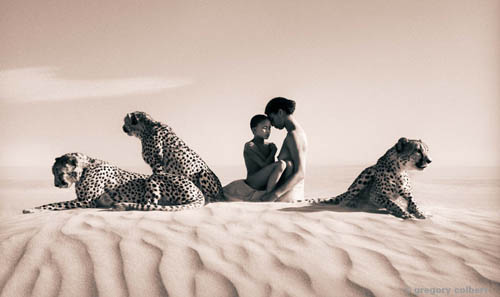 Ever had Facebook censor/block one of your comments, or erase a post or photo from your page?

Last week, I posted a link about Democratic Michigan state representative Lisa Brown being banned for using the word "vagina" on the House floor, and a well-known novelist's comment ("Apparently, they don't have vaginas in Michigan, just dicks.") disappeared from my Facebook page for more than an hour before it once again appeared. Was it a system quirk, or a filter? If the latter, I found it troublesome that Facebook would presume to limit expression like that, particularly when such a move so aped the buffoonery of the GOP-controlled Michigan state House.

This week I learned of something I find even more egregious: Facebook now claims the authority to determine what does and does not constitute art.

On Monday, June 18th, the artist/photographer Gregory Colbert, conjurer of the globe-trotting Ashes and Snow exhibit, posted on his Facebook artist page a sepia-toned image of a woman and child sitting in an African desert landscape alongside three cheetahs. As often happens with his postings, there were soon thousands of "likes" and hundreds of comments about the beauty of the image and what it communicated. As you can see in the photo as posted here, a side view of the woman's breast includes her nipple. It is semi-nudity, comparable perhaps, in some ways, to a National Geographic photograph -- in no way pornographic or salacious.

Among the hundreds of comments was one, read by Colbert's New York-based staff, which called the image inappropriate, and another from the same "fan," saying she had reported the image to Facebook. By 7:30 a.m. the next day, Facebook had pulled the entire posting and dialogue from Colbert's page, saying that the "graphic nature of the photograph" violated the site's Community Standards. It also warned that if he continued to violate the standards, his page would be permanently removed.

Colbert on Tuesday re-posted the image with a red dot, reading "Facebook Censor Here" over the woman's nipple, and wrote: "Where I see an image of the harmony between a mother and child and three cheetahs, the FB censor sees pornography. FB has deprived me as of my first amendment rights to share my vision of wonder for nature... If you agree, please 'Like' this page and demand that FB restore the unaltered image. Until then I will not post any more of my images on FB."

Colbert spoke with me by phone, from his apartment in Paris, to share more of what thinks about this Facebook move. The French, by the way, are once again scratching their heads over American prudishness.

NIX: I imagine having your work called too "graphic," and having Facebook imply that it is pornography rather than art is quite a shock to you.

COLBERT: More than 10,000,000 people around the world have seen this photograph, as part of the Ashes and Snow/Nomadic Museum exhibit, and not once have we had any hint of this kind of reaction. Many people have come across my work over the years, from many different cultures, and told me what it means to them. Pornography has never been on that list. On what basis does Facebook decide what is pornographic, because I believe this action is tantamount to censorship. As former U.S. Supreme Court Justice Potter Stewart famously said, "Pornography is hard to define, but I know it when I see it." So, I invite Mark Zuckerberg to view my work and tell me if it looks like pornography.

This image was taken during a sandstorm, and the cheetahs moved closer to the woman and child because when they tucked in behind them, they were protected from the stinging sands. This particular woman and child and all of my animal collaborators would not appreciate how they are being defined by Facebook.

NIX:Facebook is a private community site, in the end, and we all sign off on their policy in order to participate. Is it that you believe their policy should change?

COLBERT:I have many good things to say about social networking in general, and Facebook in particular, but at a time when this particular company is concerned with its stock price -- and there's nothing wrong with that; it is one way to measure success -- I think it's also important to measure success by its values and practices. When I saw this, frankly, their stock with me dropped through the floor, because I thought of all the arts and everyone in the creative expression field. If we wish to participate on the largest social networking site, at least in North America and Europe, are we going to be subject, with no recourse, to such arbitrary filters and erasure of our work? If Facebook chooses to be ex-communicative, or to set themselves up as arbiters of what is and is not art, then there should be some kind of transparency and democratic process for the community, an explanation of how these decisions are made. Perhaps it's time to audit the auditors. There should be a way to challenge the opinions of the FB censor.

COLBERT:To be relevant, every artist or writer wants his or her work to be of the time, and I think my work, and this image in particular, is of its time and relevant because it creates a bridge between ecology and culture, between animals and people. So, the fact that it's shared with as many people as possible is very important to me and this is the reason I joined Facebook. My priority is not that the work hang in the salons of the 1 percent of the world, rather that I'm trying to democratize the wonders of what I see in nature, and when I see an organization trying to limit my freedom of expression, I'm concerned.

This photograph is a celebration of nature, and I don't see how they arrived at thinking this is pornographic or offensive in any way. Are they shocked that we humans, like other mammals, have nipples? Or was it that the cheetahs were naked? I have no idea how this decision was made to literally disappear my photograph and the thousands of "likes" and hundreds of positive comments from people around the world who were coming together to consider it. By horrific contrast, we know from a 13-page internal Facebook standards document that was leaked, if my photograph showed the heads or limbs of this mother and child, or the cheetahs, crushed or mangled, it would have been acceptable. That's twisted.

COLBERT:Facebook is not giving its community enough credit, to trust that we know the difference between art and pornography. There will always be people -- extremists, fundamentalists and the like -- who will find offense in anything, and those people certainly have a right to have their opinions heard. But because a person complains, doesn't get Facebook off the hook. That's actually a cop-out. There are all kinds of diverse views out there, and there will always be complaints against one thing or another. Are they going to take everything down? In this case, Facebook is hiding behind one complaint and ignoring the common sense values of the larger group. In the age of social networking, my question is: Are we going to be forced to live under draconian decrees and infringements on our freedom of expression on this site, or is it time to demand more transparency and democracy within about what we are and are not allowed to share?

As I've said, I will not post any more artwork on Facebook if the original photograph is not allowed to be re-posted. I don't want to be complicit in this kind of censorship. I will find another way to share and have a conversation about my work -- one not subject to such a random and arbitrary filter. Facebook is supposed to be about creating community and sharing, discussing ideas... which is what people do on my page around my images. That Facebook completely erased the image and the discussion about art and ecology, and our relationship to nature -- because of one person's intolerance! -- is unacceptable and needs to be addressed.

I agree with Mr. Colbert.In an era when Facebook has become the new town square, it's time we demand a more democratic approach to what we can and cannot say to and show each other.