In an effort to make things simpler and more obvious, Facebook is changing the way people control who has access to their posts, status updates, pictures and other content. The company is also changing tagging so that users will have the option to approve tags before they take effect.

This is the biggest change to Facebook privacy settings since May of 2010 when the company last tried to simplify controls. But, based on what I can tell from my pre-briefings, they seemed to have done a better job this time.

The most significant change is that users will be able to more easily control who gets to see each post, photo or other content as they are creating the post. Whenever you post content, there will be an opportunity to decide who can see it.

Facebook is dropping the term "everyone" as a sharing option because people found that confusing. Public can be anyone on Facebook or even anyone on the Internet.

Minors (users under 18) will not have the option to share with the public. They will be limited to friends or friends of friends.

One nice change is that you can now edit a post's privacy settings. If I post something to Public and later decide to restrict it to friends, I can go back and change it at any time.

Users need to be aware that whatever setting they last made will become the default setting until you change it. So, if you usually post to "Friends" and later post something to "Public," the next time you post it will go to the public unless you change it back again.

In what Facebook describes as a response to user requests, they are allowing people to be able to approve photos and other items before the tag takes effect. If a user decides to turn on this feature, all items they are tagged in go into pending status until the user approves them. That way, if your friend posts an ugly picture of you, you can prevent it from being tagged with your name. You can't necessarily prevent the person from posting it, but at least you won't be tagged. By default this feature is off but you can turn it on in your profile settings.

Facebook is also making it clearer that removing a tag once it has been set doesn't result in the content being removed but is now adding "social reporting" on photos and posts from others to make it easier to request that the person take down the content if it bothers you. 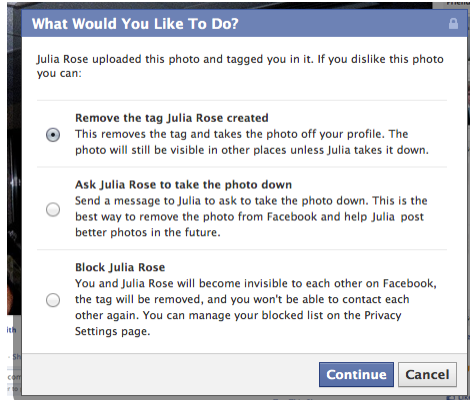 You can now tag anyone and anything including non-friends

In the past you had to be friends with someone to tag them or if you wanted to tag a page from a business, public person or organization you had to "like" them first.

Now you can tag anyone. For example, there might be a group photo with lots of people in it including people who aren't your friends. Before you could only tag your friends but now you can tag anyone. And lets say there's a company you want to comment on (perhaps critically) but you don't "like" that company or want to get updates from them. You can now tag them without having to like them.

Expanding on the idea of its Places location check-in, Facebook is allowing users to disclose their location in any post, including on the web. It can take advantage of location aware technology (such as IP address) but you can override that if you want. For example, you could be at home in Iowa and post something about that trip to New York you just took or that trip to Paris you hope to take and location-stamp those post.

As in the past, Facebook will allow control over who can see various parts of your profile (such as hometown) but is making it a bit easier to find and configure them. As you go through your profile, privacy settings for each setting will be more obvious.

Also, as a result of moving many settings inline, the general profile profile settings will be shorter and less complicated, according to Facebook.

The changes may not be immediately evident but they will roll out over the next few days. Facebook will provide a tour of the new features, help center information and other tools to help users adjust to the changes

At first glance it might appear that Facebook is responding to Google+'s use of Circles, which is somewhat like the new inline privacy controls. I might have though that too but I as a member of Facebook's Safety Advisory Board, I was pre-briefed on these changes, several months before Google launched Google+ so this is clearly not a reaction to Google+ though it makes Facebook's controls a bit more like those of Google.

Discloser: Larry Magid is co-director of ConnectSafely.org which receives financial support from Facebook, Google and other companies.