Using the more straightforward "please" in a sentence can be more effective in making people click a button online, according to new research from Facebook.

For the past two years, Facebook’s Compassion Research Team has been trying to help social networkers resolve disputes over everything from unflattering photos to gossipy status updates. The group's findings have streamlined the way Facebook's members deal with the stuff that gets under their skin.

Yet the research also underscores how tiny changes in word choice -- tweaks that alter the tone, not the meaning, of a phrase -- can alter how people behave. And it offers a glimpse at the ways tech companies will test subtle differences in language to nudge us toward behaving in the ways they'd like.

For example, in a test of teen users, the Facebook team found that changing the word "report" to "This photo [or post] is a problem" tripled the number of people who opted to flag troubling pictures, from 3 to 10 percent, and nearly doubled the number who tagged upsetting posts, from 8 to 15 percent. The frequency with which individuals messaged friends who had uploaded the problematic content also increased, from 14 to 21 percent in the case of images and 4 to 11 percent for status updates.

"We learned in our focus group that [teens] were worried that if they clicked 'report,' they would get their friend in trouble, when that was not the intent," explained Arturo Bejar, a Facebook engineer who leads the Compassion Research Team.

In another test, replacing the vague and jargony "Hide/Mark as spam" with "I don't want to see this" led to a 58 percent increase in the number of people who'd provide feedback on posts in their feeds. 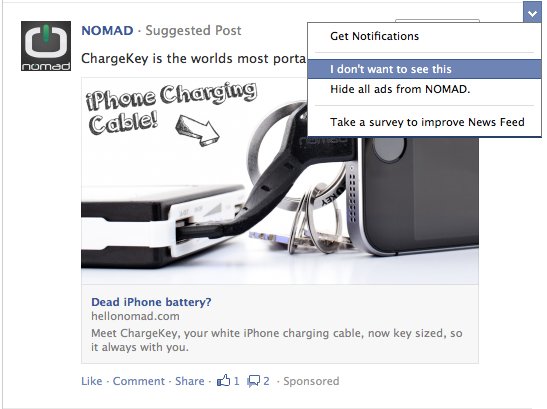 These results "go against everything that you'd teach in computer science," said Bejar. Conventional wisdom maintains fewer words and fewer steps will lead to higher response rates online, but doing the opposite -- throwing in more words -- actually helped Facebook get more and better information from its members, the team found. That lesson in trading jargon for simplicity might be eye-opening for Facebook, though it comports with the age-old writing rules most editors and teachers hammer into their students.

Bejar's group shared these results at an event held earlier this month, where they also highlighted how injecting informal language encouraged people to work out disagreements on their own. (Before, flagged content was sent straight to Facebook's moderating queue).

If you attempt to have a photo of yourself removed from Facebook, a pop-up will ask why you don't like the picture, then offer five possible explanations to choose from. At the conference, Facebook said that rephrasing the multiple choice answers to sound more “conversational” -- switching “embarrassing” to “it’s embarrassing” -- decreased the likelihood we’d give up on reporting the photo (from 13 to 11 percent) and increased the likelihood we would select an emotion over "other" (from 50 to 78 percent). 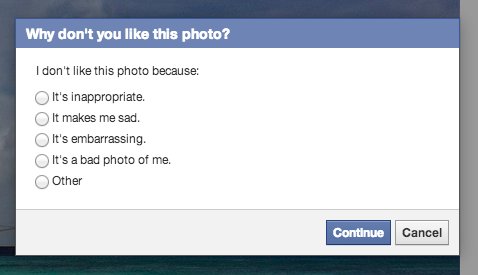 Once you pick one of the five options, Facebook instructs you to send a message to the person who posted the picture. Here too, subtle changes in word choice influence our decisions: The researchers found 52 percent of us will send a message reading, “Hey [friend], there's something about this photo that bothers me. Would you mind taking it down? Thanks.” Fifty-five percent will click the "send" button if it reads, “Would you please take it down?” (Emphasis added). 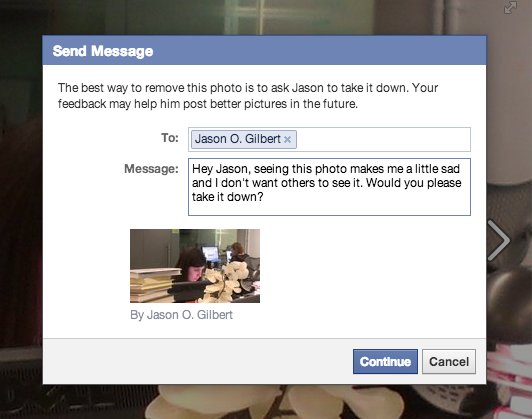 Though the percentage change is small, Facebook's enormous user base means that tiny tweak can make a big difference in the volume of communication. According to Bejar, people are sending 3.9 million messages a week using Facebook's reporting tool.

Why the difference? When the findings were presented, Dacher Keltner, a psychology professor at the University of California, Berkeley, explained that previous studies have found polite language has certain key attributes that have been shown to foster cooperation.

“There are simple things like being indirect, being sort of muted in your requests, complementing before you ask for something and using the very basic language of politeness” that can lead to more agreement, Keltner said.

Bejar and his colleagues will frequently collaborate with Facebook's so-called "content strategists," who shape the voice of the site by helping to name and describe new features, he said.

Alicia Dougherty-Wold, who who oversees Facebook's content strategists, told The Huffington Post in an interview last year that Facebook strives for simplicity and pithiness in the language it chooses, both because it makes the site seem faster, and because it makes its users more comfortable opening up.

"If Facebook is conversational, then I’ll feel comfortable sharing something, whether it’s simple or profound," Dougherty-Wold said.