Where were you during the Great Facebook outage of 2010?

While Facebook suffered more than two hours of server problems today, thousands took to Twitter to share the news, complain and get their fix of social networking. Naturally, some were quite clever with their 140-character limit and provided some humor during the time of despair.

The site first started experiencing issues today at 2:39 p.m. EST, and the problems persisted until just after 5 p.m. EST. The outage was Facebook's second in two days, though yesterday's was significantly shorter.

The problems came amidst news that Facebook CEO Mark Zuckerberg is donating $100 million to Newark public schools and the fact Zuckerberg has an estimated net worth higher than Apple CEO Steve Jobs.

Here are some of the best tweets to come out of Facebook's downtime today. Vote on which ones you like the most and let us know of any we've missed!

PHOTO GALLERY
The Best Facebook Down Tweets
Download
Calling all HuffPost superfans!
Sign up for membership to become a founding member and help shape HuffPost's next chapter
Join HuffPost
Voting Made Easy
Register to vote and apply for an absentee ballot today
Register now 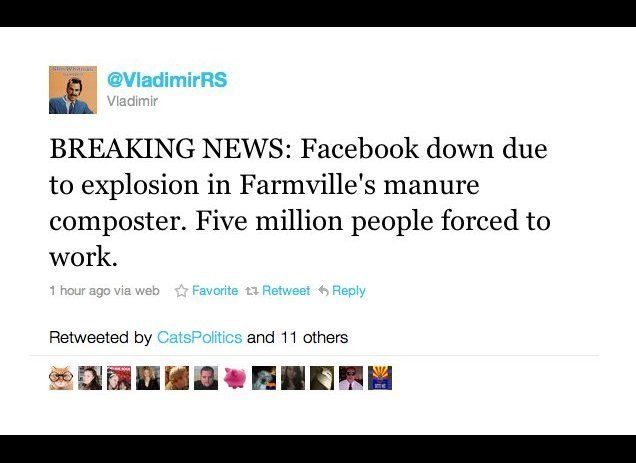