The new tool, which rolled out to some earlier this week, lets users to select different kinds of emoticons to express exactly what it is they're doing or how they're feeling. 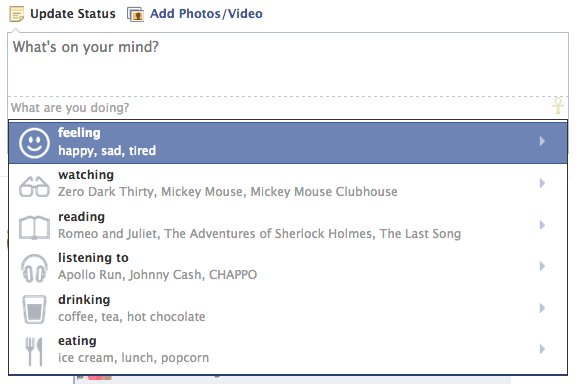 Some options offer simple animations to express emotions (happy, sad, tired, excited and others). But a handful of the new update features are activity-based, letting users tell friends what they're "listening to," "reading," "drinking," "watching" or "eating." 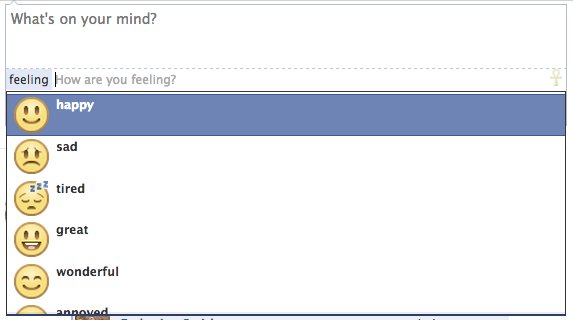 A drop-down menu offers the option to tag pages of interest or specific products that correspond to the various activities. If you're drinking coffee, you can tag "coffee," or you can get more specific and add Starbucks's Facebook page to the update. The same goes for what books you're reading that you might want your friends to check out, or what bands you're listening to. 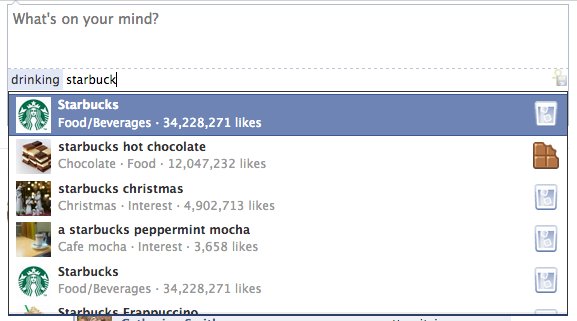 According to TechCrunch, Facebook's emoticon feature has the potential to enhance the user experience by making it even easier for people to share specifics about their interests with friends, who in turn have easier access to more information on those interests.

On the other hand, TechCrunch also notes that Facebook alerts users that the details they include in the updates could show up elsewhere on the site. That means the tool is also another way for the social network to collect data about people for targeted advertising purposes.

Slate goes so far as to call the new feature a "fiendish plot."

When pressed for comment on the data-collecting aspect of the tool, a representative for Facebook told Slate only that the emoticons are "a new, more visual way for people to share how they're feeling and what they're doing in a status update." He also told Slate that the information contained in the emoticons is not available in Graph Search "as of right now."

What do you think of the new emoticon feature? Will you use it? Tell us in the comments section below, or tweet us @HuffPostTech.