We live in a day and age where couples get engaged and their first thought is "I can't wait to post on Facebook!" instead of "I can't wait to call my friends and family!" You know it's true. And with that territory comes status updates that are more barf-tastic than a Jared Galleria of Jewelry commercial.

I have never been proposed to (that I know of), but I imagine it's a pretty great feeling when someone you want to marry actually asks you to marry him. And I'm truly happy for my friends (and all ladies out there!) who are entering into a lifetime of monogamy with the ones they love. But some of these statuses have to be addressed. (And if you're offended by this entry, just call me a bitch who doesn't know what it's like to have found the #ManOfMyDreams, which like, is totally accurate.)

Without further ado, the five most annoying engagement statuses: 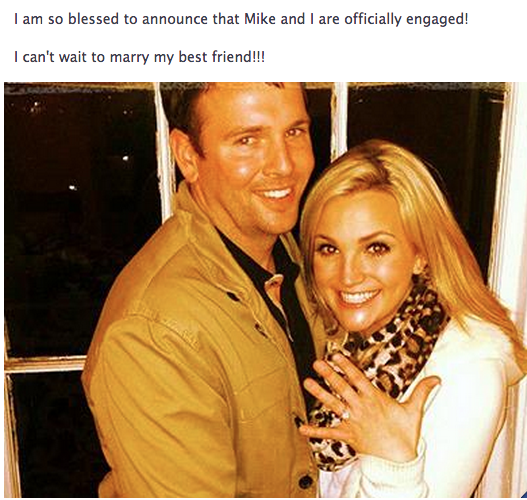 We get it. Your fiancé is your "best friend." But like, is he REALLY? And isn't that KIND OF a slap in the face to your female bestie(s) who was there WAY before Mr. Soulmate came along? I'm more OK with "Can't wait to marry the love of my life," but the best friend thing is just so 1999 Tim McGraw cheesiness. And I can't help but wonder if those girls will be the ones who realize 10 years down the road that their only confidante is a middle-aged man with his hands down his pants watching Sportscenter. Lord help 'em. 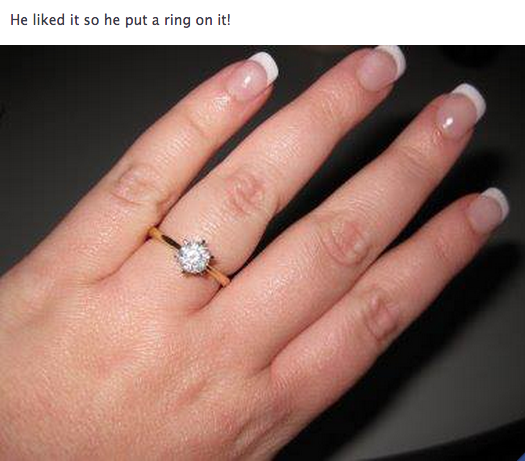 If you're doing this to be funny and/or you're posting a pic of you wearing your engagement ring in a Beyonce-esque leotard, then YOU. GO. GURL. But if you're not that witty (no offense) and really thought, You know what would be clever? Quoting Beyonce's greatest hit from 2008, then I hate to tell you that like, it's not clever. At all.

As for acrylic French nails... I can't even.

Girl, why so quick to abandon your identity? Unless your last name is something like Ballsweat and his is Dicaprio or Levine, what's the frantic countdown to the name change all about? You should be dreading it -- I hear the legal stuff is a real bitch, and did you so quickly forget that you have to take a trip TO THE DMV!? Good God, hold on as long as you can. 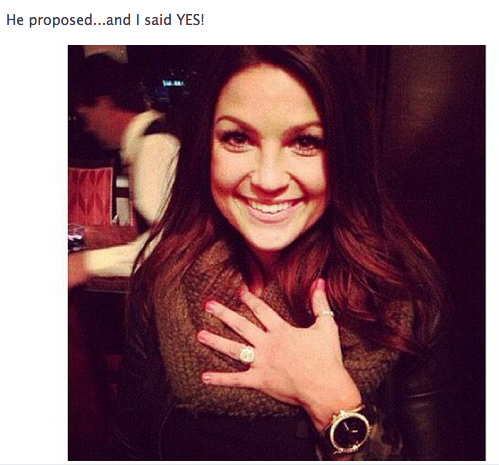 No shit. Has anyone in the history of social media ever posted "I said no! Can't believe that idiot proposed. We've only been hooking up for six months!"

Ladies, if you're posting a picture of a ring on your hand crying tears of joy, we get it. I don't go posting pics of my vacay cocktails with a caption that says, "I'm getting drunk," do I? Some things are just implied. Plus, "I said YES!!!!!" with 903820343 exclamation points makes it seem like it's some big shocker you agreed to marry the poor guy.

(For the record, I do think it's kinda cute when a GUY posts "She said yes!")

I just threw up on my keyboard. First of all, if you actually thought "This is love at first sight," that was the Jager bombs talking. Second of all, if you're really itching to write a poetic, flowery post about your "fairy tale," start a blog. Third of all, can we just ban the words "fairy tale" on Facebook in general?

I'd like to see: "Three years ago, I got wasted and slept with a dude on the first night and now we're engaged. Ladies, there is hope."

Then there are the girls that post ALL OF THE ABOVE over time. Along with pictures of the flowers their fiancés sent to their offices (#LuckiestGirlInTheWorld). Along with asking you to "vote" for where they should have their wedding reception/rehearsal dinner/honeymoon. Along with numerous "Thank you for the sweet wishes" posts designed just to remind you they're engaged. Along with 129873120 pictures of them holding their left hands up. Ladies, we got the point after the first post. And the 17th.

This isn't AT&T. Less is more.