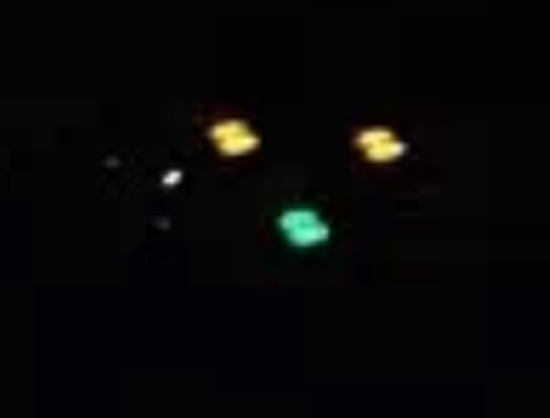 (The photo is an enlargement of a piece of the image taken by a Facebook friend who posted the photograph the day after the New Jersey couple's encounter with a triangle UFO.)

A Vineland, N.J., couple thought their UFO encounter was not recorded until noticing that a friend captured the hovering craft while driving nearby during the event and posted the image.

The two were surprised to see a friend's Facebook photo posting after watching a low-flying, silent, triangle-shaped UFO moving over their two-story home that shone light onto their property that "illuminated the whole front yard" and slowly moved east and disappeared, according to testimony from Case 53929 in the Mutual UFO Network (MUFON) witness reporting database.

The friend snapped a photo of the object while driving that the witnesses say briefly hovered over their home. An enlargement of the object can be seen on this page. View the full image here.

"My fiance and I were getting into bed in our second story bedroom," the reporting witness stated. "We both noticed bright lights out of our window."

The two got out of bed and moved to the window for a look.

"We noticed that the lights were so bright that it illuminated the whole front yard."

But then they looked up.

The following day, the witness discovered a photograph of the object.

"Someone on my Facebook page posted a picture of it from a distance. At the time, I did not feel threatened or scared. I was in awe. The photo attached is the photo my Facebook friend posted when she was driving the same night."

The case occurred about midnight on November 21, 2013. Vineland is a city in Cumberland County, N.J., population 60,724. New Jersey is a current UFO ALERT 4 rating, with a higher than average number of UFO sightings nationally. New Jersey was the 17th highest reporting state with 13 reports in January 2014 -- while California had 102 reports -- the highest reporting state in the nation.

The above quotes were edited for clarity. Please keep in mind that most UFO reports can be explained as something natural or man-made. If New Jersey MUFON investigates and reports back on this case, I will release an update. Please report UFO activity to MUFON.com.