Facebook made a $10,000 donation in May to the reelection campaign of Utah Attorney General Sean Reyes, who has received national attention for fighting a court ruling that would make gay marriage legal in the state.

The donation, first reported by QSaltLake, is listed in a filing for Reyes' 2014 primary campaign on the State of Utah Financial Disclosures website.

Here's a screenshot of the filing: 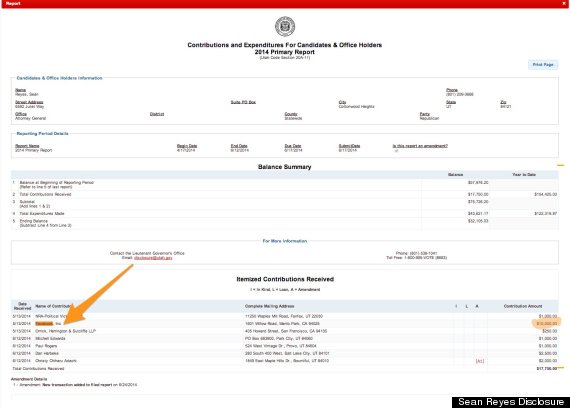 Facebook has a strong record on LGBT issues and that will not change, but we make decisions about which candidates to support based on the entire portfolio of issues important to our business, not just one. A contribution to a candidate does not mean that we agree with every policy or position that candidate takes. We made this donation for the same reason we’ve donated to Attorneys General on the opposite side of this issue -- because they are committed to fostering innovation and an open Internet.

Facebook has made many political contributions, even starting its own PAC in 2011. The company has also donated $8,500 to the reelection campaign of California Attorney General Kamala Harris, who is a particularly vocal proponent of marriage equality.

In response to the donation, QSaltLake Assistant Editor Bob Henline has launched a Change.org petition, asking the social network to "publicly decry this bigotry and make an equal or greater contribution to the campaign of Charles Stormont who is also seeking the office of Utah Attorney General." Reyes' opponent has publicly supported LGBTQ equality.

"I'm an activist within the community, and Sean Reyes has drawn my distaste for his comments about the LGBT community," Henline told HuffPost. "So I wanted to see who was funding his campaign, and when I looked through the disclosures, I discovered that Facebook was his second-largest contributor. Being a Facebook user, I have always assumed that it was pro-equality and pro-diversity, so it shocked me."

In the "Reasons for Signing" section of the petition, one commenter wrote: "As a gay man and an avid user of Facebook, I can't understand how a company that values diversity and inclusion would give this politician money! My marriage is something that he [Reyes] is fighting very hard against."