I recently succumbed to a bout of narcissism and decided to check out my own Facebook profile. I found no new flattering photos of myself (one can always hope) or new "likes" on my latest post. I was about to go see what an ex-roommate had been up to lately when a small photo of a skinny, mostly-naked girl caught my eye. There, in the "Recent Activity" box at the very top of my Facebook profile, was a photo of a leggy woman wearing beige underwear. More specifically, the beige, body-shaping underwear I had purchased from flash sale site Gilt Groupe nearly three weeks before. "Bianca purchased SPANX Slim Cognito Seamless Control Panty on Gilt," read the status update, which had been posted automatically thanks to the permission I'd apparently given Gilt, at some point in the past, to share my browsing and shopping activity on Facebook on my behalf. Obviously I'd made a miscalculation somewhere in my privacy settings (sort of -- more on that below). 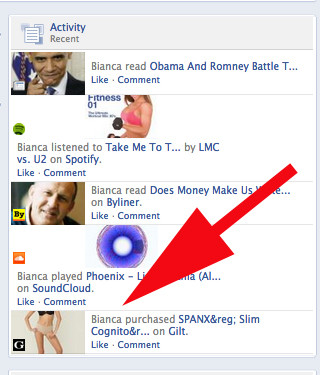 It goes without saying that among all the things I'd want to publicize to my 1,300 Facebook acquaintances, my need for tummy-tucking, industrial-strength granny panties doesn't make the list. Forget sharing the purchase with my friends -- I don't even care to remember it. On the scale of momentous life events, it ranks somewhere between flossing and ordering a side of French fries.

So why were Facebook and Gilt Groupe trying to help me register my underwear buys with the world? Does shapewear really need to be social?

Seeing my underwear end up on Facebook isn't just unsettling. It underscores a fundamental tension plaguing all social media sites: the authentic, human experiences that attracted millions of people to these platforms now risk being polluted by the marketing noise ushered in with these companies' push for profits. The real voices, real feelings, and real moments from users are being watered down by blathering from a logo with a slogan to share. It's the digital analog of inserting ads next to a family photo album, or having a dinner party crashed by a marketing guru who's got a PowerPoint of "value proposition" bullet-points to get through. The health of these social media sites hangs in the balance. Will the natural impulses to monetize the creation -- whether it's Facebook, Tumblr, Twitter, Instagram or any other social site -- end up destroying what made the sites popular in the first place? Will people hang out at a party where companies are replacing users as the distinguished guests? When I joined Facebook in 2004, it became the place where I was my best self, not my real self; where I curated a life that seemed like one big success, fantastic party and exotic vacation after another. So did you (be honest), and so did your friends. While we might have felt guilty checking up on each other, the voyeurism was enticing enough to attract 900 million people and keep us glued to Facebook.com for hours each month. These days, my life according to Facebook looks less fabulous and more consumption-filled than ever before. We're encouraged to share not only engagements, birthdays, deaths and births, but also, right alongside them, the equivalent of each time we flip through a catalog or pick up a pair of socks.

Having a record of what sales I browsed or what purchases I've made -- precisely what Gilt Groupe will share with Facebook if you allow it to -- doesn't benefit my social media experience nearly as much as it helps a retailer's.

We're in the midst of a Jekyll-and-Hyde moment in the evolution of online social networks: sharing that will get us to shop is taking precedence over sharing that can strengthen social ties. We're made to share our business because it's good for business. And this suggests a looming identity crisis for "social media" that, more and more, appears to be "marketing media," a tech-fueled hunt for ways to leverage our friendships, interests and activity to produce a "ching" at the register.

Sure, it can be handy to have sites keep a shopping diary on our behalf so they can offer customized tips for items we might like to buy. Amazon.com and Netflix often nail it with their personalized recommendations.

But it's the broadcasting of what we buy, and the attempt to sugarcoat it as something that furthers our friendships, that should make us squeamish. Even as Facebook says it hopes to "strengthen how people relate to each other" and encourages us to view its product as a "virtual scrapbook," the brand is pursuing ways to turn itself into something more akin to a mall.

Research shows many users are reticent to mix shopping with socializing. A survey by Experian, an information services firm, found that while 69 percent of UK consumers were happy to hear from brands via email, just eight percent wanted companies to contact them on Facebook, and just four percent were open to contact with them on Twitter. In 2011, the share of consumers who said they followed retailers on social media sites dropped from 58 percent the year before to 51 percent, according to the 2012 Social and Mobile Commerce study. Why? "Concerns about information sharing and privacy," survey participants said.

People may ultimately be loathe to hear about brands from their friends, too. If money matters are considered taboo among polite company at the dinner table, how will we feel knowing more about what, and for how much, our six hundred dearest acquaintances are buying? This social shopping marks another example of the "continuous consumption" trend: not only can we buy anytime and anywhere, but we're about to get front-row seats to what our friends are buying, all the time and everywhere.

Facebook says knowing what our friends enjoy will help us make better decisions on what baby carriage to buy or hotel to stay in. Perhaps so. On the flipside, it's easy to imagine the one-upsmanship and competitive instinct it breeds, not to mention the resentment. What conclusions would a manager draw from seeing an underling browsing a Chanel sale online, where bags cost $2,000 a pop? Would she be a little less likely to approve her employee's request for a raise? The companies doing the sharing on our behalf seem more inclined to act first and ask questions -- or apologize -- later. They're vaguely aware there's a line not to be crossed, but those concerns are being drowned out by the irresistible appeal of milking our relationships to broadcast their wares. It's worth noting that even though shoppers who sign up for Gilt Groupe's "Facebook sharing" integration can choose to make their activity private, the default setting, according to our tests, is to have purchases and sale-browsing visible to "everyone."

Still, even continuous consumption champions know there's a limit: the SPANX underwear share prompted an apologetic mea maximum culpa from a Gilt Groupe spokeswoman -- one that suggests, for what comfort it's worth, that the company has drawn the line just before the entrance to our bedrooms and bathrooms. The shopping site promises people who sync their accounts with Facebook that it never posts "intimates, underwear or newborn-related items." Something obviously went awry in my case. According to Gilt Groupe spokeswoman, the SPANX slip-up was "due to an initial omission in our product blacklist when purchase events were first rolled out." "Our intent was to always filter out all instances of Intimate & Underwear from posts made on behalf of a user," she said. And my intent was to use social media for people, not products. What are my chances of getting a filter for that, too?