Do Facebook and Google know too much about us? According to a new survey conducted by Harris Interactive, a majority of Americans are concerned about how much personal data is accessible to large Internet companies like Facebook and Google.

Harris asked 2,124 U.S. adults if they agreed or disagreed that Google, Facebook and others "control too much of our personal information and know too much about our browsing habits." A clear majority, 76 percent, agreed with the statement, and 36 percent of those "strongly" agreed.

Sixteen percent did not think large Internet companies know and control too much data, while the remaining 8 percent said they weren't sure.

Further analysis showed that slightly more women than men agreed with the statement, and that more adults with higher incomes agree than those with lower incomes.

Nevertheless, a larger percentage of the adults polled felt that government should not intervene in the practices of large Internet companies. Only 36 percent supported government intervention, while 46 percent were against it. Eighteen percent were unsure.

"[I]t seems that control of so much information by these online companies makes Americans uncomfortable. Yet, there is no consensus that government intervention is the answer," Harris concludes. "Rather, it seems, Americans are torn, possibly between ideals of free enterprise, the products and services that they use and enjoy which these large businesses provide, and their trepidations about companies yielding so much information and power."

Tell us how you would have answered via our Quick Poll. Then, view more data from the Harris poll (below).

LOOK: Do online companies control too much? 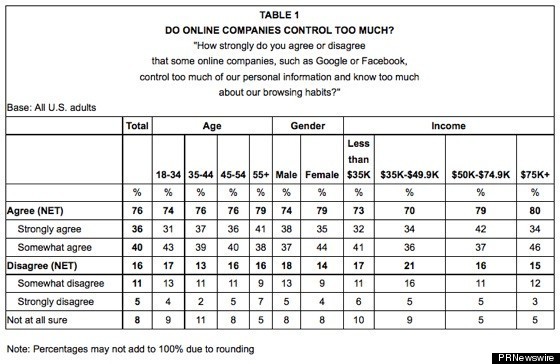 LOOK: Should the government intervene?