Facebook on Wednesday released a new caller ID app for Android called "Hello." It lets you see more information about strangers or businesses who are calling you, links your friends' phone numbers with their Facebook profiles and generally offers a few conveniences beyond the standard caller-ID functions on your phone. It also might tell you you've recently had phone calls with dead people.

When I downloaded the "Hello" app to my smartphone, I swiped over to my call history and was startled to find that my friend's younger brother Oliver was showing up instead of him -- even though he passed away two years ago.

Apparently, the problem has to do with how phone numbers can be set up on Facebook. After looking into the issue following an inquiry from The Huffington Post, a spokeswoman for Facebook told me that my friend's number was registered under Oliver's account, though it's not viewable by his friends. In other words, Oliver had two numbers associated with his account: His own cell phone number that was posted on his Facebook profile for others to see, and, for reasons that aren't clear, my friend's cell phone number that was kept private but associated with his account.

"Hello" will pull the number that's primarily associated with your account rather than the phone number you may have set to be viewable by your friends. Keep that in mind if you're keeping a phone number private for any reason. 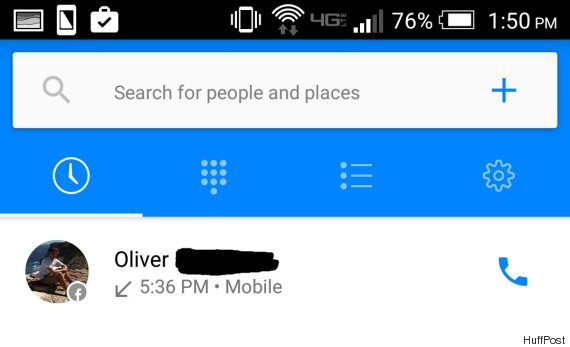 Asked if he had somehow associated his mobile number with Oliver's page upon his death, my friend told me "not to my knowledge," but that he doesn't have access to his brother's page anyway -- after he passed away, my friend was given the option to take the profile down or leave it up, but wasn't granted further access to it. So he can't update the profile now to remove his phone number.

It's unclear how many people have downloaded "Hello" so far or if any of them have experienced similar issues with the app suggesting it can help them commune with planes beyond the mortal realm. But its parent app, Facebook Messenger, has been downloaded by at least 500 million people.

In any event, now might be a good time to get your affairs in order on Facebook and decide who gets control of your page when you eventually shuffle off this mortal coil.

This article has been updated to include information from Facebook about how "Hello" handles phone numbers.