Myths and untruths are passed around on Facebook every now and then, but it's still a surprise when thousands of people at a time fall for unverified statements posted by random users.

One of the latest cases of a questionable Facebook post going viral is a photo with a with a lengthy caption that claims Congress members' children do not have to pay back their college student loans. 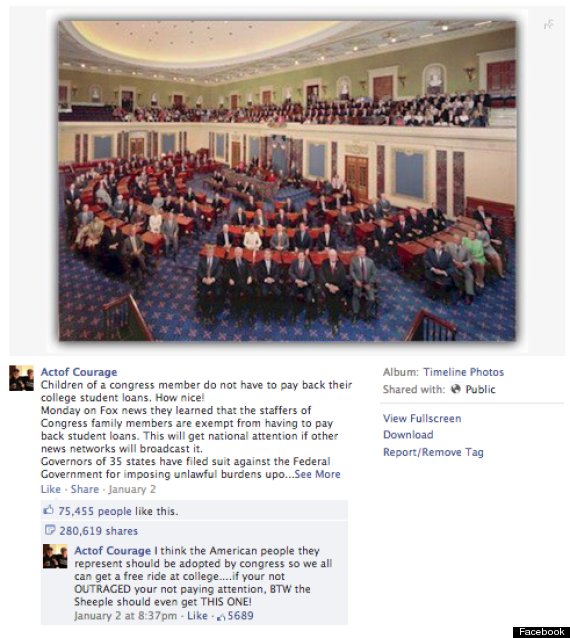 Below the photo, Actof Courage claims that "the staffers of Congress family members are exempt from having to pay back student loans. This will get national attention if other news networks will broadcast it."

The post goes on to propose a 28th Amendment to the Constitution:

Politifact gave the claim a "Pants on Fire" rating on Jan. 7, 2011, after receiving a chain email about the alleged loan forgiveness. The fact-checking group contacted the U.S. Department of Education, which responded thus: "There are no provisions under Title IV (federal student aid programs) that provide loan forgiveness for Members of Congress or their families or staff (beyond what any other borrower would be eligible for)."

The Annenenbreg Public Policy Center also did a similar analysis of the claim in 2011 and rated it "Not true."

"Some congressional employees are eligible to have up to $60,000 of student loans repaid after several years — just like other federal workers. But that’s not the case for members of Congress or their families," the Center wrote.

Will Facebook users ever tire of sharing posts with friends before independently researching theories or outrageous claims? Not this month.