Last month, BuzzFeed reported on a viral Facebook post from 2004 that is still being shared around the social site, despite the fact that it was proven to be false many years ago. The post, which accuses Wal-Mart employees of stealing money in cash-back transactions, lures people in with a receipt purporting to prove that money was stolen from a customer.

Viral Facebook hoaxes come in all different emotional flavors, trying to tug at your heart strings, tempt your adventurous side by daring you to look, or fueling the flames of your anger and frustrations. Here are some of the more widespread, and sometimes more dangerous, lies that get spread around Facebook. Be on the lookout!

1.) "Obamacare Will Steal Money Straight From Your Bank Account!"

The Affordable Care Act rollout has had a rough first month, to say the least. But its kickoff has been even further impeded by misinformation, either accidental or by blatant Obamacare haters. 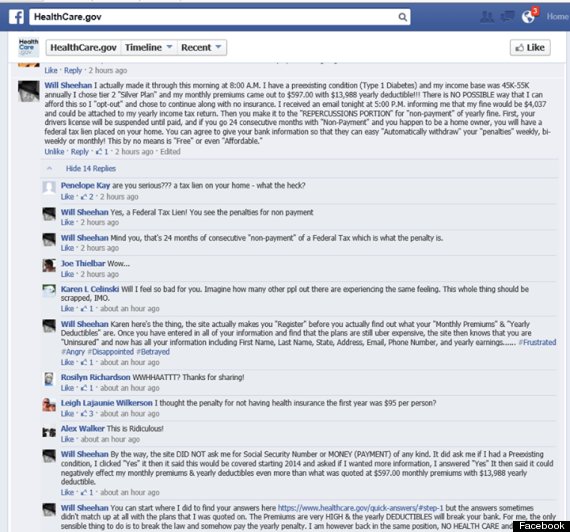 This viral post, written by a man named Will Sheehan (his identity remains unconfirmed), makes a number of lofty claims that range anywhere from being completely baseless to outright insane. The most ridiculous is the claim that signing up for Obamacare resulted in Sheehan getting hit with a $4,000 fine, AND that the amount would be taken straight from his bank account. Politifact essentially debunked the entire Facebook post, point by point. Suffice it to say, this viral post is complete malarkey.

When scanning your Facebook feed, make sure to be extra careful when sharing information that relates to divisive or controversial issues of the moment, especially when they're more complicated than a single post is able to convey.

In May, a status update written by a woman named Nicole McCarthy was being shared around at an alarming rate, identifying Ohio man Chad Lesko as a serial rapist. The post claims Lesko was on the loose and wanted by Toledo police for the rape of "three little girls and his own son." 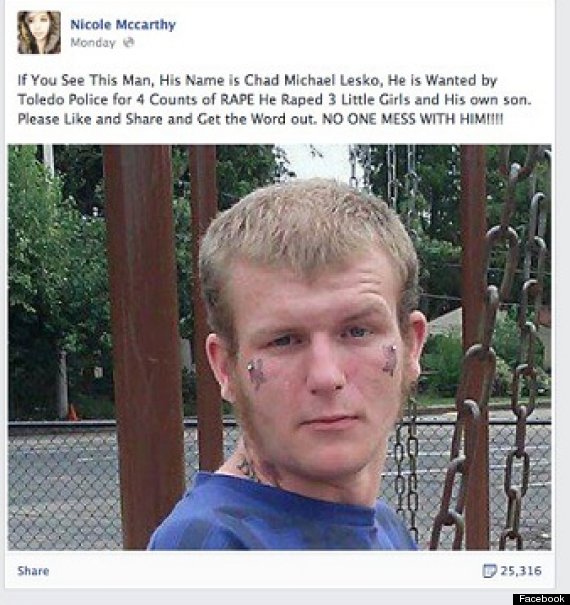 It wasn't true. Toledo police later confirmed that Lesko was not wanted on rape charges. Lesko's ex-wife later admitted on the radio that she created the fake Facebook account and started the hoax because she was angry with him. The status update was shared tens of thousands of times, and served as a good example of why it's important to have a healthy distrust of personal statuses involving serious charges about other individuals.

3.) "They Don't Want You To Know What This Terrible Disaster Is Really Doing!"

There was understandably an enormous amount of panic following the Fukushima radioactive disaster, initiated by the devastating earthquake and subsequent tsunami that hit Japan in March 2011. The world was concerned with the health and safety not just of the people on the scene, but also of the surrounding natural environment that was also being subjected to the effects of leaked radiation. That of course led to some overblown social media reactions, like this post claiming that hundreds of whales had washed ashore after dying from radiation poisoning. 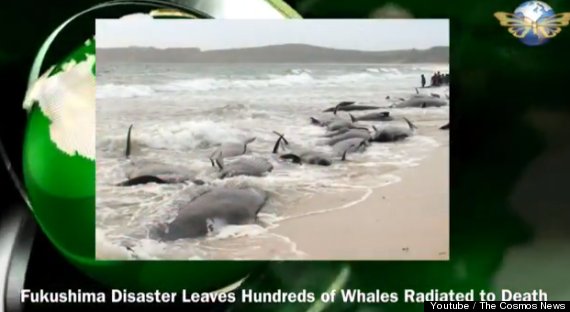 The story was completely fabricated. While a real and still heartbreaking photo, it was actually taken in 2010, when dozens of pilot whales stranded themselves on Karikari Beach in New Zealand. And though the longterm effects of Fukushima's radiation on the surrounding environment -- and the rest of the world, for that matter -- have yet to be determined, this story is definitely false.

Fear and catastrophe are often key ingredients in hoaxes. If you read something that terrifies you on Facebook, make sure to double check the source and the claims.

4.) "If You Vote 'All Democrats' In The Voting Booth, Obama Will Be Excluded!"

Just prior to the 2012 presidential election, a post swept across Facebook, warning people about faulty voting machines. 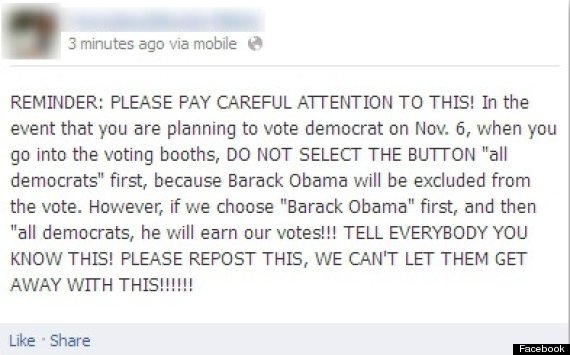 Without saying specifically what types of voting machines, the post claimed that if you selected "all democrats" first, then incumbent President Barack Obama would be excluded from the vote completely. "Choose Obama first, and then all democrats," the warning insisted. It ends, of course, with all caps and six exclamation points ordering us not to "LET THEM GET AWAY WITH THIS!!!!!!" Wait, who is "them"? The exclamation points? We're confused.

The potential danger here is that in some states, you can vote for an entire party, which includes your presidential candidate. According to Sophos Security's Graham Cluley, by voting Obama first, then going back and selecting your entire party, you may have in fact been unchecking your vote for President Obama. Very sneaky, misinformers.

Your vote is far too important to risk it over some viral Facebook hoax. When in doubt, don't listen to the social network, or at least double check the information if you're considering it.

5.) "Too Lazy To Do Anything Real To Help? Join This Facebook Group Instead!"

In the wake of the earthquake that decimated much of Haiti, millions of people donated their time and money to help the relief effort. And as with any tragedy, there were those who used the event as an opportunity to make money or make a name for themselves.

In Sweden, a Facebook group claimed that they would send two kronor ($0.30) to Haiti for every member who joined, once they reached 200,000 members. When the group finally reached the member goal, it was revealed that the entire project was started by a fictional group called the Swedish Necrophilia Association.

When the hoax was discovered, the group's presence on Facebook was completely erased. One of the creators of the hoax told a Swedish newspaper they did it "to get a good laugh and teach people about critically reviewing their sources." Because that's the best way to help out the world; not by actually helping out the world (like directing people to a worthy charity), but rather "teaching" others not to be fooled into thinking they are.

At any rate, always be cautious of these types of posts in the wake of any large news event.

There have been many Facebook death hoaxes, with singer Celine Dion perhaps being the subject of the most recent. Don't worry, she's alive and well. But the most surprising response to a death hoax came in 2012, when the rumors of Bill Nye's death swept across the netscape like wildfire. 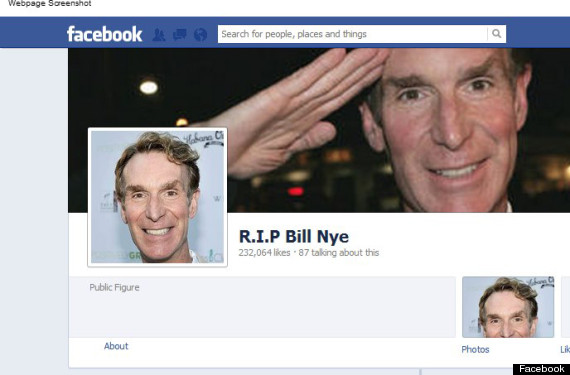 Countless pages were created dedicated to the Science Guy's passing, each one liked by hundreds of thousands of people and shared amongst their friends. But lo and behold, Nye was very much alive. Oddly enough, this was not the first time Nye had been the subject of a death hoax.

As with every such hoax, the reasoning behind it is often a mystery. However, the idea has been floated that Nye's vocal opposition to the anti-science movement has made him a target. That, or the fact that many people love him, and would be likely to rally around him in the event of his supposed death.

But this story provides a good rule of thumb: If Facebook is telling you someone is dead, don't believe it until you can confirm it with a more legitimate news source.

7.) "Help This Sick Child By Liking And Sharing This."

This one has taken a number of forms over the years. People share a picture of a child that needs some sort of medical attention, and if users like or share the photo/story, Facebook will supposedly donate a certain amount of money to the cause. 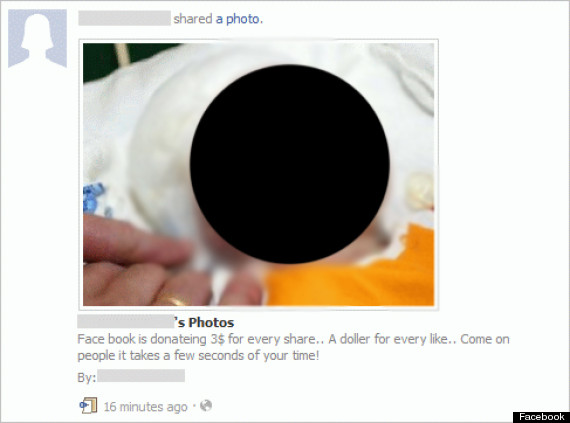 Some might ask, "Well, can it hurt to simply like or share a story like this?" Your heart might be in the right place, but what most Facebook users don't understand is that when you like or share pages with titles such as, "Click if you hate cancer!" or "Click if you want to end world hunger!" you might actually be making money for someone who has no intention of donating that money to any charitable organization. Scammers rack up a ton of likes and then sell the page to a company who is looking for quick, easy access to thousands of users.

This makes the use of a sick child's photo all the more disgusting and reprehensible. It's become such a widespread problem that Facebook pages are being created for the sole purpose of combatting this detestable practice. Sometimes it's good to be a little discerning with your Facebook "likes"!

According to this viral post, in the 1940s five Russian prisoners were kept awake for fifteen days straight using an experimental gas stimulant. The results of the experiment were grisly, to say the least, including insanity and cannibalism, among other disturbing side effects.

It makes for a riveting story, because it turns out to be just that, a work of pure fiction. And not by accident. It was originally written to be short fiction on a wiki site called Creepy Pasta. Perhaps it's our innate love for all things crazy and Russian that made Americans eager to click and believe the story.

When you see something on Facebook that is hard for you to believe, there's probably a good reason. Always take a closer look before sharing it with your friends.

9.) "Protect Yourself From Big Brother With This Simple Copy And Pasted Status Update!"

Well, it's official: Twelve million Americans believe that Lizard people run our government. And now with the recent paranoia that has emerged in the wake of reports about massive domestic surveillance by the NSA, it's no surprise that so many people would participate in a Facebook hoax preying on the Big Brother fears that seem to be embedded in our cultural fabric. 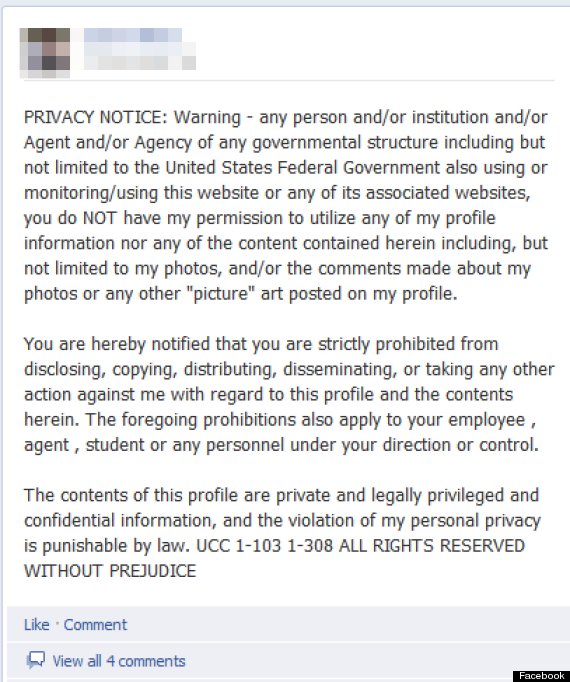 The idea behind this hoax, which originated in 2012, is simple. Paste this text in a status update and no one -- no individual, group, corporation, or government entity -- can use any content contained in your Facebook profile without your permission. Oh, if only you could dictate actual law in a Facebook status.

The problem is, as pointed out by popular myth-busting site Snopes, simply telling Facebook "what's on your mind?" with long pseudo-legal jargon can't undo the Terms of Agreement that all Facebook users are required to approve before using the site. If you're looking to stop Facebook from using your photos and whatnot, you'll need to change your privacy settings manually. This hoax has long since been busted, but that probably doesn't mean it's gone for good.