UPDATE: Facebook announced in a blog post published Tuesday at 2:25AM that it would be suspending the new feature that allowed third-party developers to access the home addresses and phone numbers of its users. Read more here.

--Facebook CEO Mark Zuckerberg has said that his company's mission is to "make the world more open and connected."

In other words, a Facebook app can now access your address and phone number, though that application or website can only obtain this information if you explicitly grant it permission to do so (see screenshot below).

The world's largest social network has struggled with privacy issues, and the change is likely to rankle users who fear their personal information is being shared more widely than they would like, potentially putting them at risk for spamming, identity theft, and more.

Sophos, an Internet security firm, warned in a blog post that the change could "herald a new level of danger for Facebook users."

Sophos explains, "Now, shady app developers will find it easier than ever before to gather even more personal information from users. You can imagine, for instance, that bad guys could set up a rogue app that collects mobile phone numbers and then uses that information for the purposes of SMS spamming or sells on the data to cold-calling companies. The ability to access users' home addresses will also open up more opportunities for identity theft, combined with the other data that can already be extracted from Facebook users' profiles."

On the other hand, All Facebook points out that the switch may save users time when they register for new websites and online services: "Rather than having to fill out the information over and over with each new application that you install, the social network enables users to accomplish the exact same thing in a matter of clicks."

"I dont think any developer needs this information from their users and Facebook should stop this ASAP as this will only bring in government heat on you for this," Facebook user John Sweeney Jr. wrote.

Another commenter, Tony Mazan, wrote, "Before you even consider implementing this very intrusive feature, Facebook needs to stop the scammers from making rogue applications and scamming people, my advice now to everyone on facebook will be to remove their numbers and block any application that requires these details, Facebook is going a step to far [sic] with this!!!!!!!!!!"

On Facebook you have absolute control over what information you share, who you share it with and when you want to remove it. Developers can now request permission to access a person's address and mobile phone number to make applications built on Facebook more useful and efficient. You need to explicitly choose to share your data before any app or website can access it and no private information is shared without your permission. As an additional step for this new feature, you're not able to share your friends' address or mobile information.

Those wary of having their address and phone number shared with Facebook app developers may find the best course of action to remove this information from their Facebook profiles. 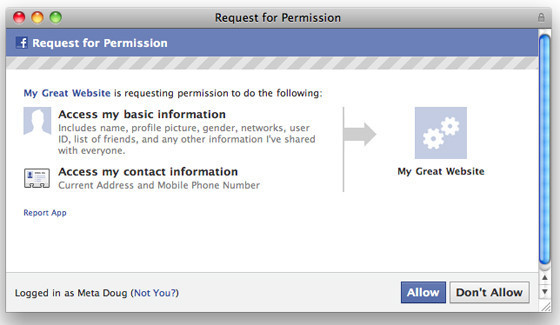