At a press conference Thursday, Facebook unveiled Home, a new smartphone software design it cryptically said “isn't a phone or operating system,” but is “more than just an app” and will deliver a "completely new experience."

With Home, Facebook has crossed the line between something people check -- that they have control over, and deploy according to their wishes and needs -- to become something that’s always on, checking in with us, fighting for attention, waving people we know in our face. Rather than a tool we use to talk to others, the phone, thanks to Facebook, has become something that communicates to us. And it’s Facebook that gets to do the talking.

Home, which will be available for download on a handful of smartphones next week, is essentially a Facebook-ified version of Google’s Android operating system, modified by Facebook engineers to place the social network at its core. A flow of updates from the News Feed will be the first thing people see when they turn on their phones -- the newly named “cover feed,” a slideshow of friends’ photos and status updates, will take over the phone’s primary screen, though users can swipe past to access other applications. Home also touts “chat heads,” a feature that brings together texting and messaging, replaces names with Facebook photos and lets users message within any application. Ads will be on their way to the cover feed soon, Facebook conceded. And though the social network didn’t say as much, technology observers, such as Om Malik, have pointed out that Home will let Facebook scoop up even more personal information about everything from our locations to our calls.

The social network has a very specific idea of what we should be doing on our phones and has designed Home to push that mission. The phone "[puts] people first," Facebook's director of product, Adam Mosseri, explained at Thursday’s press conference, noting that Home’s design purposefully shifted the focus "away from tasks and apps."

Seen one way, Home makes communication with loved ones more seamless, more fluid. Seen another, however, Home lets Facebook ensure we don’t have bothersome news readers, workout trackers or even work emails -- those irksome apps and tasks -- distracting us from Facebook.

All tech companies want us to spend more time with their products. But Facebook is unique in that its fortunes depend on convincing us to pay attention to it over all else, and it just invited itself to be the DNA of our most personal device, which we carry with us, on average, all but two hours of our waking day. Google, Apple and Microsoft of course want their users to spend hours with their smartphones and consume liberally from the ecosystem of content they have for sale. Yet they compete with each other in no small part to deliver the smartphone software that will be most intuitive, helpful and easy-to-use. Facebook's software isn’t there to necessarily offer the best smartphone software or most intuitive design, but to offer the best version of Facebook, one that more quickly and permanently attracts our attention.

Facebook doesn’t just want us to spend time on its phone. It wants you to spend time on Facebook. Home is strategically designed to grab our attention, with mewling chat heads and rotating pictures of our friends, and to make everything it shows more interesting than whatever you see around you. Phones can still be slipped into pockets and darkened, but for Home adopters, Facebook will be the first thing they see when they pick up their phones -- on average, we do so 100 times a day -- and Mark Zuckerberg expects we’ll be enthralled by what his social network sends to our screens. Our phone, more than ever, now has an agenda.

“From the moment you wake up your phone, you become immersed in cover feed,” a Facebook press release promised. Take out “your phone,” and we might have a sense of what else Facebook has in mind.

Mark Zuckerberg dismissed concerns that Home would distract people from their surroundings or from being in the moment with the people around them.

"Whether or not communicating online disconnects you from people offline ... I think that’s overblown," Zuckerberg said, according to TechCrunch. "With Facebook and other tools, you can stay connected and get more context from more people."

And yet Facebook’s advertisements for Home show people checking their screens at dinner parties, sprawled on the couch with a friend and even while in bed with a loved one. Even the name raises questions: Does Home reference the fact that Facebook has found its home on phones? Or is Home supposed to be our home?

Clifford Nass, a Stanford University professor and expert in human-machine interaction, observed in an interview last month that companies have been wielding an ever-more powerful arsenal of tools in the fight for our attention, and Home would appear to be the latest weapon. Although it’s too soon to predict how Facebook’s innovation may shift our eyes, Nass’ research has shown that the high-tech war for our time is leading us to multitask with greater frequency, which in turn is injuring our ability to focus and think deeply.

“The way to make money in media is to sell attention. You have to fight and claw and do all these things to get attention. And the more media there is, the more you have to compete, so it’s an arms race, with everyone competing harder and harder to grab people’s attention,” Nass said. That “arms race” drives multitasking and, Nass explained, “If we’re breeding a world in which people chronically multitask, that has very, very worrisome and serious effects on people’s brains.”

Home will also be free to interrupt its regularly-scheduled broadcast with a word from its sponsors, Facebook confirmed, bringing ads ever more directly into our personal space and consciousness. Facebook could theoretically let Bank of America “poke” people when they’re near a branch, or, by comparing our location to the content in our cover feed, assure J.C. Penney that we stepped into its store moments after seeing its ad rotate through the phone’s screen. 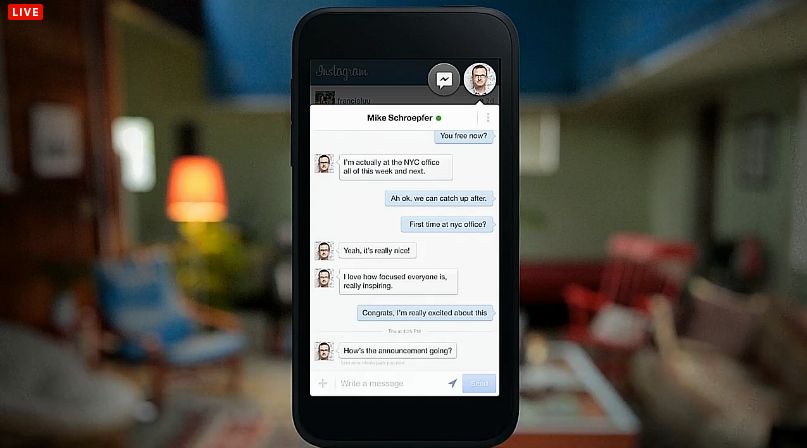