When Wall Street investors talk about Facebook, it's incessantly "mobile this" and "mobile that." How is social network supposed to make money off of smartphone ads when its iPhone app is universally agreed upon as being terrible?

On Thursday, the crew at Facebook is rolled out a speedier, souped-up version of its iPhone and iPad app. Imagine Mark Zuckerberg in John Travolta's leather jacket. Facebook for iOS has been Grease Lightning'd.

"We just released a new Facebook app for iPhone and iPad and it's a lot faster," Mark Zuckerberg wrote in a status update. Our team completely rewrote it from the ground up to focus on speed. It's a big step forward."

When you first log on after downloading the new version, you may not notice a difference. Aesthetically, the old and new versions are remarkably similar. There are still buttons to create a status update, upload a photo, see friend-requests -- all laid out in the same place. (Check out the differences in the side-by-side comparison of the old and new app, below). 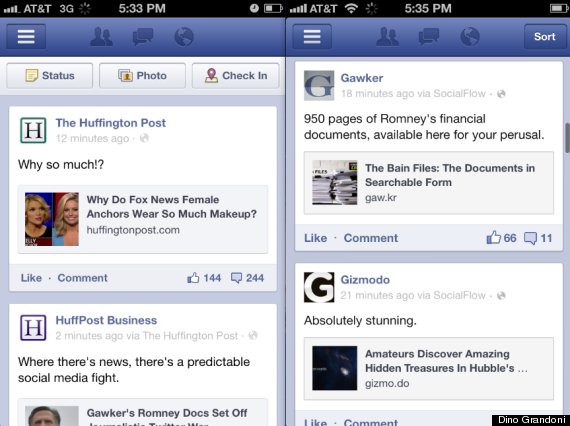 At most, the design changes are just a slap-on paint job; the real update took place below the hood.

Immediately you'll notice faster loading times for News Feed refreshes, photo uploads and so on. The new app also lets you interact with content in a more intuitive way. When you tap on a photo, the app has the image instantly pop up to occupy the entire screen (as opposed to taking a dozen seconds to load). When you scroll deep into your News Feed, the app automatically pushes to your feed all the latest likes, comments and stories, and displays simple alerts in the top notification bar, which means that you'll no longer have to refresh your News Feed to see what's, erm, new.

The secret to the new app's success is its overhauled engine. Instead of working HTML 5, the same code that websites are written in, it's written in the "software development system" of the iPhone, as The Verge's Ellis Hamburger explains. Essentially, the app works in the language Apple intended all iPhone apps to be written in. The main reason your old Facebook iOS app was so clunky was because HTML 5 works best on computer web browsers, not mobile phones.

As someone who's been so frustrated with the iPhone's Facebook app as to yell out loud at it while waiting in line at stores, I'll attest to this improvement in the app's agility. In those frustrating situations, I've switched over to the Twitter or Instagram apps for my social-media fix. I'm sure Facebook's lost (or was in danger of losing) plenty of other eyeballs besides mine for the same reason.

Like Zuck said, big step forward it is, especially since the bar was so low before, but it isn't clear how this upgrade addresses that second problem of effectively advertising to users. Does this new version introduce ads into News Feeds in a way that pleases both users and advertisers? Will Facebook be able to turn its mobile app into a marketplace where I can actually buy something I want while I'm on my smartphone? I can't answer that; only time (and maybe a few more updates) will tell.

And Android users, you won't be left out in the cold too long. Zuckerberg is apparently forcing his employees to use Android devices over iPhones to remind them how much Facebook for Android sucks, reports Business Insider. Bad news for Zuckerberg's minions is good news for us!