SAN FRANCISCO/NEW YORK, May 17 (Reuters) - Facebook Inc is set to raise up to $18.4 billion in its IPO and become the first U.S. company to be worth more than $100 billion at its debut, as investors bet on a big pop in the stock when it begins trading on the Nasdaq on Friday.

Frenzied demand, especially from individual investors hoping to buy into an Internet juggernaut that touches hundreds of millions of people every day, is expected to drive Facebook well above its initial public offering price of $38 a share, which was already at the top end of its target of $34 to $38.

Analysts were divided on how high the price might go on the first day of trade, with some expecting a relatively modest gain of 10 percent to 20 percent while others said anything short of a 50 percent jump would be disappointing.

"It will be bananas tomorrow," said Greencrest Capital analyst Max Wolff. "This is all about the future, so it really
is a lottery ticket.

"The stock could initially rise and then it could go parabolic on a wave of retail investor hope. These shares are
going to trade on hope. I do not know how to value hope," said Wolff.

Facebook is selling an up to 18 percent stake in the company at a valuation of $104 billion, comparable to the market worth of Amazon.com Inc, and exceeding that of Hewlett-Packard Co and Dell Inc combined.

The highly anticipated offering, the largest by a U.S. Internet company and the second-largest in U.S. history after Visa Inc, vaults the eight-year-old Facebook to the front ranks of corporate America.

It will give 28-year-old Chief Executive Mark Zuckerberg, who started Facebook in his Harvard dorm room, a net worth of
nearly $20 billion.

Enthusiasm for Facebook shares comes despite questions about the company's long-term money-making capabilities, particularly after it reported a quarter-to-quarter revenue slide in April.

Others warn that the price tag, equivalent to over 100 times historical earnings versus Apple Inc's 14 times and Google Inc's 19 times, makes Facebook a risky bet.

"I think they'll make money - it will just take them a little bit longer because they're pioneering new ways for advertisers to reach customers," said Walter Price, a portfolio manager at RCM Capital Management. "It's not like there's a simple formula. They have to try different things."

"It shouldn't be a surprise to people that the growth rate is going to moderate over the next couple of years," he said, adding that he expects the stock to trade at around $42 on Friday, which would be an 11 percent gain.

Wall Street's top brokerages fought tooth-and-nail to ensure their wealthiest and most reliable clients got a slice of the IPO. Those with big accounts and a long history as customers likely got first dibs, and would-be buyers who had no such ties were lucky to get any, industry sources said.

A Morgan Stanley Smith Barney adviser based in the northeast said he saw internal figures that showed the firm had more than 60,000 orders for the IPO from 6,600 brokers in over 570 offices - eclipsing a more typical 500 brokers in 300 offices.

The brokerage arm of Morgan Stanley -- the lead underwriter on the IPO and therefore expected to get the most shares -- initially capped the number each retail client account could receive to 500 shares, which was lower than Bank of America Merrill Lynch's ceiling of 2,000 shares.

But Morgan Stanley Smith Barney emailed its wealth advisers late on Thursday afternoon to say that it had raised the cap to 5,000 shares, according to sources who spoke on condition of anonymity.

"I am sure they were getting calls," said Alois Pirker, research director at Aite Group LLC. "One of the advantages of being a lead underwriter is that you get preferential treatment. I am sure there were some wealthy individuals who were wondering if it would be better to be with Merrill Lynch."

A spokeswoman for Morgan Stanley Smith Barney, a venture with Citigroup Inc, declined to comment.

For most retail investors, their first chance to invest in Facebook, which has some 900 million users, will be on Friday, when they risk getting trampled by institutional funds.

Financial advisers are warning that if the stock skyrockets, the average person might end up getting orders filled at a price much higher than they wanted and then face the possibility of losses as funds steamroll in and then zip back out, taking the price off its highs.

But these warnings are largely falling on deaf ears.

"A lot of retail investors are not concerned about valuation. That's what is going to drive the first-day pop," said Jim Krapfel, analyst at Morningstar. "I think anything over 50 percent will be considered a successful offering -- anything under that would be underwhelming."

Facebook shares will begin trading at around 11 a.m. on Friday, when the well-known brand could attract enough interest to exceed the 458 million shares traded the day General Motors went public after emerging from bankruptcy in 2010.

Facebook will celebrate its Wall Street debut with an all-night "hackathon" at its Menlo Park, California, headquarters starting on Thursday evening, a tradition in which programmers work on side projects that sometimes turn into mainstream offerings.

Zuckerberg, fictionalized in the Oscar-winning 2010 film "The Social Network," will control roughly 56 percent of the company's voting shares after the offering.

His majority control has raised flags among some investors, uneasy with ceding so much power to the "hoodie"-wearing
executive who wrote in a letter to potential shareholders that "we don't build services to make money; we make money to build better services."

Facebook also faces challenges maintaining its growth momentum. Some investors worry the company has not yet figured out a way to make money from the growing number of users who access Facebook on mobile devices such as tablets and smartphones. Meanwhile, revenue growth from Facebook's online advertising business, which accounts for the bulk of its revenue, has slowed in recent months.

One UBS adviser initially received calls from 12 clients clamoring to buy shares of Facebook, but over the past couple of weeks, two have changed their minds.

"A lot of people are thrown off by the recent negative stories in the press," the adviser said, speaking on condition
of anonymity. "One guy was worried about General Motors stopping its advertising on Facebook."

GM said on Tuesday it would stop placing ads on Facebook, raising questions about whether display ads on the site are as effective as traditional media.

Overall, financial advisers are struggling to manage clients' expectations about what the stock will do and in some cases, if they will be able to get any stock for them.

This week, Facebook increased the size of its IPO by almost 25 percent to 421 million shares, or a 15 percent stake in the company -- a day after hiking its target price range about 14 percent.

If a greenshoe option for underwriters is exercised, as expected, the stake sold increases to 18 percent, raising north
of $18.4 billion. More than half of the proceeds of the IPO will go to existing shareholders, including early backers such as Accel Partners and Russia's DST Global.

The more bullish had expected Facebook to price at $40 per share. However, the Nasdaq Composite Index fell by more than 2 percent on Thursday, quelling such optimism.

"I expect it to open at a nice premium, but I don't expect a LinkedIn-type performance because of the sheer size of this IPO," said Scott Sweet of research firm IPO Boutique.

"You've got a large offering at an increased price, so a huge pop may be difficult to achieve," Simmons said. "When you're talking about doubling or a pop the size of LinkedIn..., the others were smaller floats, under 10 percent, so you had
this artificial feeding frenzy."

Facebook has 33 underwriters for the IPO, led by Morgan Stanley, JPMorgan and Goldman Sachs. 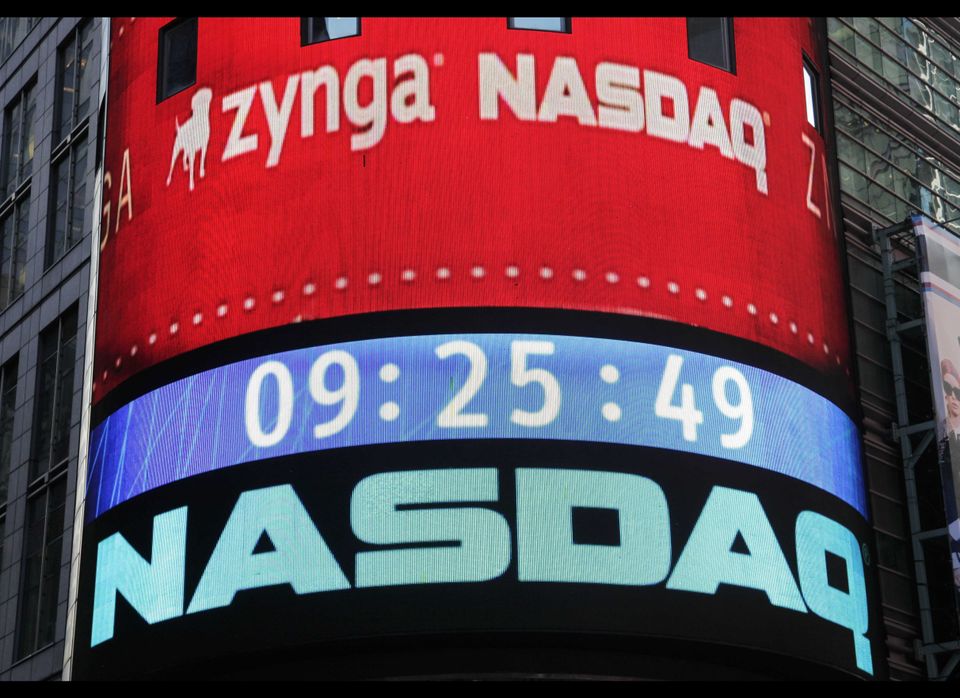 1 / 10
Zynga: $1 Billion
Social gaming company Zynga raised $1 billion in its IPO in December, 2011, the biggest web-related IPO since Google, <a href="https://www.huffpost.com/entry/znga-ipo-nasdaq_n_1153518?ref=technology" target="_hplink">according to the Associated Press</a>. Zynga had a valuation of $7 billion before it began trading on the Nasdaq on December 16. By May 17, 2012, the social games company <a href="https://www.google.com/finance?client=ob&q=NASDAQ:ZNGA" target="_hplink">was worth $6.09 billion</a>.
AP