He was a soldier before he was a salesman. Charles Nicholson joined the National Guard in 1975, served six years as a telecommunications specialist before moving on to a life as a traveling salesman, driving the interstate from Charlotte to Greenville, South Carolina, pitching transmission fluid and coolants to car dealerships along I-85. "It's a fine job as far as it goes, but honestly, I felt like there was something I was supposed to be doing to make a difference, to touch people's lives," he says. 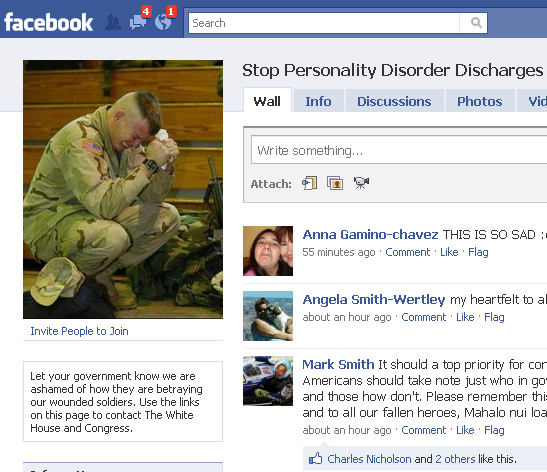 Then Nicholson read my article in The Nation, the story of Sergeant Chuck Luther, who had been badly wounded by mortar fire while serving in Iraq, then held in a closet by the U.S. Army for over a month, under enforced sleep deprivation, until he agreed to sign papers saying he was ill before Iraq and thus not eligible for benefits. Since 2001, over 22,600 soldiers have been pressed into signing these documents, affirming that their wounds were caused by a pre-existing condition, "personality disorder." By making these soldiers ineligible for a lifetime of benefits, the military is saving over $12.5 billion in disability and medical care.

Personality disorder (PD) has been cited as the cause for everything from deafness following a rocket blast to shrapnel wounds to profuse vaginal bleeding, denying benefits to soldiers who have earned Purple Hearts and served multiple tours in Iraq and Afghanistan. Sgt. Luther was discharged with PD after a blow to his head during combat shut down vision in his right eye.

"I read Luther's story and all the disgusting details: how they blasted heavy metal music at him at night, how they injected him with sleeping meds when he tried to escape the closet. I sat down, and I just cried," says Nicholson. "It was so outrageous. I thought, 'Somebody's got to tell somebody about this.'" That night Nicholson started a Facebook page, "Stop Personality Disorder Discharges for our Wounded Soldiers." He was expecting a few friends and family to join. He was wrong.

Within hours the page had 100 members. By the next day that number had quintupled. Today, six weeks after founding the group, "Stop Personality Disorder" has over 3,600 members and is growing by about 100 members a day.

"I get emails now, about 25 to 30 a day, from veterans who have gone through this," he says. "They're thanking me, saying, 'I didn't know other soldiers are going through this. I didn't know people knew this was happening.' ... I got an email a couple days ago from a teenage girl. Her mother served in Iraq and was discharged with personality disorder after she was gang raped."

Nicholson says the horror stories have shaken him — and left him inspired to push further. "When I started the group, I thought maybe the page could become a place where soldiers discharged with PD could share their stories and get in touch with each other. Now," he says, "I really believe we can stop this."

The veteran is organizing a massive phone call and email campaign, urging members to flood the White House on Memorial Day with letters and calls demanding President Obama once again take up this issue. As a senator, Obama put forward a bill to halt personality disorder discharges, but the bill died quietly, as the president never spoke about his bill or the PD scandal during his presidential run. Today the White House says the president "continues to be concerned."

For Nicholson, that's not good enough. "We can stop these discharges," he says. "It's just a matter of getting the information out there. I have faith that when people find out what's going on, they'll be as outraged as I am. They'll demand change."