Capitalizing on its trove of aging status updates and vacation photos, Facebook has decided to help its members take a trip down memory lane with a new feature called "On This Day."

As the name suggests, "On This Day" surfaces posts and photo albums that were uploaded on the same date one year ago. The feature presents a NewsFeed-like scroll of statuses and pictures posted then, recreating the experience of what you would have seen on your NewsFeed at the time. (Facebook introduced a similar feature back in 2011 under the same name, but it wasn't as well-developed as the current iteration.)

"On This Day" may not be available to everyone yet; we reached out for information on the roll-out process. You can try accessing it by navigating here.

But be forewarned: While you can now peek into your Facebook past, you may not enjoy the memories.

For example, I can see that at this time last year, one of my friends was vacationing in Turkey, another was captivated by the gymnastics events during the London Olympics, and yet another had just applied for three jobs. Some of the information is approximate: Facebook brought up a photo album posted on Aug. 8, 2012, rather than July 31. An additional bar at the right shows major milestones for my friends that occurred this month, one or several years ago. 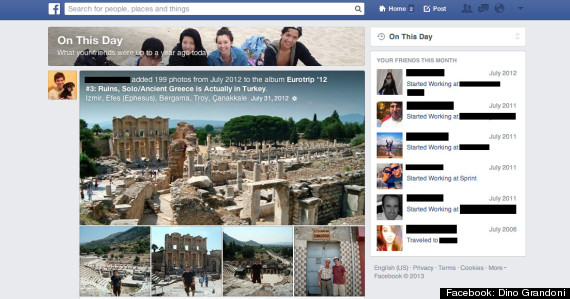 The new feature will likely be a fun diversion for most, but is it really prudent for Facebook to make old data so accessible? Such blasts from the past might remind Facebook members of the uncomfortable amount of information the company has collected on them, as well as how differently they use the social network today.

Last year, for example, some Facebookers rediscovered years-old conversations they had had between their old Walls and their friends' Walls, which read like private conversations.

Facebook members, it turned out, were really surprised by the candor with which they had once posted on Facebook, back when these conversations were less visible and accessible to others. They felt more at ease communicating publicly when the social network was more limited, before they were, say, Facebook friends with their parents -- and before they knew Facebook was leveraging every piece of information shared to serve ads and make money.

Nowadays, people tend to be more selective about what they post on the world's largest social network. So "On This Day" may bring not just nostalgia for old beach trips or college buddies, it may make you long for the smaller Facebook of yore.