While we've always known that Facebook has the final say in how people use its service, a new study reveals just how effectively the social network can nudge its members to behave in ways Facebook might consider most fitting.

An unprecedented study from Carnegie Mellon University followed the privacy practices of 5,076 Facebook users over six years, between 2005 and 2011. Researchers found that during the first four years, users steadily limited what personal data was visible to strangers within their school network. Yet through changes Facebook introduced to its platform in 2009 and 2010, the social network actually succeeded in reversing some users' inclination to avoid public disclosure of their data.

In fact, the social network's new policies were not only able to partly override an active desire not to post personal details publicly, but they have so far kept such disclosures from sinking back to their lower levels, according to the study. They also found that even as people sought to limit what strangers could learn about them from their Facebook profiles, they actually increased what information they shared with their friends.

This result “highlights the power of the environment in affecting individual choices," wrote the study’s authors, Carnegie Mellon University’s Fred Stutzman, Ralph Gross and Alessandro Acquisti. "The entity that controls the structure (in this case, Facebook), ultimately remains able to affect how actors make choices in that environment."

“Like a modern Sisyphus, some consumers strive to reach their chosen 'privacy spot' -- their desired balance between revealing and protecting -- only to be taken aback by the next privacy challenge," the researchers added.

In an email to The Huffington Post, Facebook spokesman Andrew Noyes pointed to Facebook's customizable privacy features. "Independent research has verified that the vast majority of the people on Facebook are engaging with and using our straightforward and powerful privacy tools -- allowing them to control what they're sharing, and with whom they're sharing," he wrote.

The Carnegie Mellon study, the first to follow Facebook users over time, tracked how their sharing with friends and strangers evolved between 2005, when the site was open only to college students, and 2011, by which point it had attracted nearly 700 million users. The study’s cohort consisted mostly of undergraduate students and, later, recent graduates -- a limited sample to be sure. The researchers defined “public sharing” as disclosures to unknown individuals within the Carnegie Mellon University network.

As Facebook’s membership grew, and as the site increased the variety of information that could be shared, users in turn became more cautious about what they displayed to unknown individuals, the study found. Between 2005 and 2009, Facebook users in the study exhibited “increasingly privacy-seeking behavior” and gradually limited what information could be seen by strangers. They grew more protective of all types of personal data, from their interests and favorite books to their birth dates and hometowns.

Then something surprising happened: Between 2009 and 2010, these privacy-aware people suddenly became more open with certain kinds of personal data. The researchers observed a “significant increase in the public sharing of various types of personal information.” (Emphasis theirs.) As the charts below show, users' tendency to share their interests; favorite music, books and movies; hometown and high school decreased steadily until 2009. In 2011, when the Carnegie Mellon team gathered its final set of data, the cohort, which had seemed on a steady march toward sharing less with strangers, was still sharing details with non-friends on their network. As the study’s authors write, “disclosures in the majority of fields had not gone back down to the levels reached before those [privacy] changes.” (Again, emphasis theirs.) 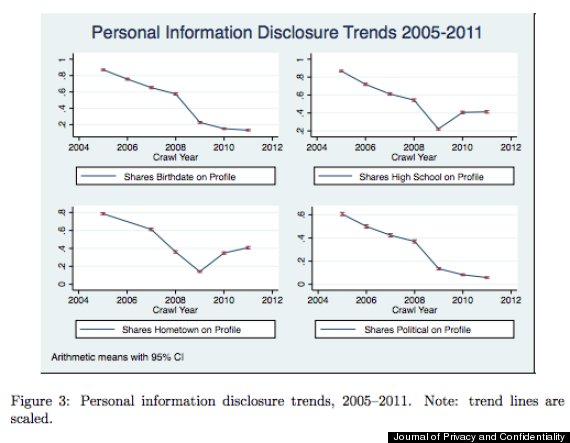 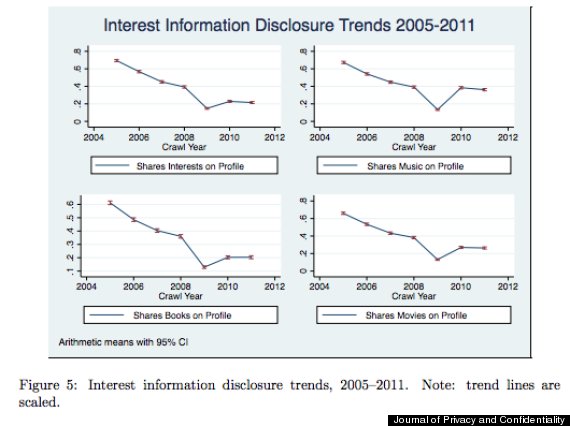 The Carnegie Mellon researchers observed that the uptick in sharing applied only to certain kinds of personal data. After comparing the type of information shared with the changes Facebook had put in place, they concluded the reversal was, “with high probability,” caused by an update to the social network's privacy controls in December 2009 and the launch of Community Pages and Connected Profiles in April 2010, which made some previously private information about a user’s interests more widely visible.

Perhaps Facebook users simply became more comfortable with the idea of sharing personal information publicly, or perhaps they couldn’t figure out the new privacy settings. (Other research actually suggests people have grown more willing and better equipped to shield their private stuff from strangers. A 2012 Pew Internet and American Life report found that 79 percent of social media users considered privacy settings on social networks not difficult or “not too" difficult to use.)

More detailed privacy settings are not necessarily the answer for users who want to avoid public sharing, according to the study’s authors. They argue, perhaps counterintuitively, that elaborate privacy options might even be part of the problem.

Enabling users to choose which specific group of peers -- such as “friends” or “friends of friends” -- can view their posts can result in a “misdirection of users' attention” and has “been linked to increases in disclosures of sensitive information to strangers,” such as third-party apps or Facebook itself, the researchers wrote. However, they don't offer a clear alternative to Facebook's current approach.

Acquisiti, an associate professor at Carnegie Mellon and one of the paper's authors, said the study’s findings call into question the merits of letting companies self-regulate on matters of user privacy. On Facebook, “users were taking charge [of their privacy],” he explained. “And yet things happened to push them to a higher level of disclosure than they’d expressed an interest in previously, or pushed them to disclose [information] to third parties that did not necessarily happen with users’ awareness or consent.”

7 Things We Forget We Do Online