If you're addicted to Facebook and trying to quit, here's a little trick: Think about how much you love Instagram.

According to a new study, people who quit Facebook for three days have a much weaker urge to return if they are reminded of the many other social media sites and apps that can fulfill their desire for online friendship.

To assess how people reacted to Facebook deprivation, researchers asked 167 students at the Chinese University of Hong Kong to abstain from the social media site for three days. Participants were split into two groups to answer surveys that were exactly the same except for one key element: One group was explicitly queried at the beginning and end of the experiment about using other social networks such as Instagram and Whatsapp, and the other was not.

After three days of Facebook-free life, those who had not been asked about other social media sites said they wanted to use Facebook more than they did on the first day. But those who had been reminded of alternative sites was less interested in using Facebook than they had been at the beginning of the experiment.

The chart below shows the two groups' reactions to losing Facebook between the first day (in black) and the third day (in gray). The "Low" group, which was not asked about other social media, reported "missing" and "liking" Facebook more after not having access for three days. The group also had a stronger "intention" to use Facebook again soon.

On the other hand, the "High" group, which was asked about other social media, reported that they missed, liked and intended to use Facebook less than they had three days prior. 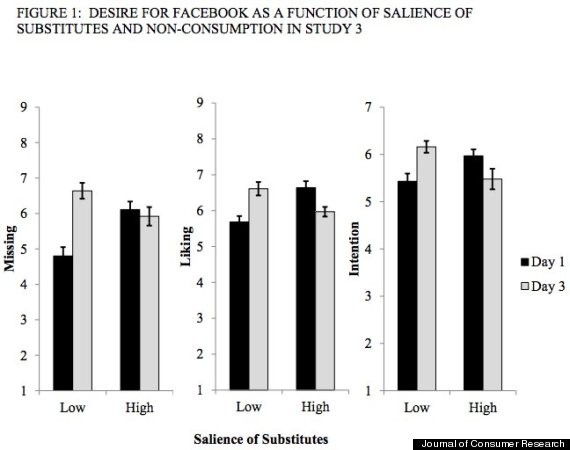 Not using Facebook for three days made one group just want to use it more.

Past research has found that Facebook makes people happier when it is used to directly interact with others, rather than to simply peruse other people's posts. So it's possible that the mention of other social media sites led the "High" group to substitute connecting with people through those sites for their lost time on Facebook -- and thus to miss Facebook less.

Cutting off online interactions beyond Facebook can have negative consequences, according to another study last year. Heavy Internet users were found to experience "negative moods" when quitting the Internet cold turkey.

The recent Facebook experiment was just one of several included in a larger study, which was designed to examine how people's behavior changes when they are deprived of some of their favorite products. It was conducted by professors Xianchi Dai of the Chinese University of Hong Kong and Ayelet Fishbach of the University of Chicago's Booth School of Business.