In honor of Valentine's Day, Facebook let us in on something creepy. With the mountains of data it has on its members, Facebook has a pretty good idea if a romantic relationship between two people on the social network will last.

It turns out that if two people have been "Facebook official" for three or more months, they're likely in it for the long haul.

In a new study, Facebook data scientist Bogdan State analyzes the relationship statuses of U.S. Facebook users from 2008 to 2011. He found that the most important predictor of whether a relationship will last or not is how long the couple has been together.

State came to the conclusion that "about half of all Facebook relationships that have survived three months are likely to survive to four years or longer," which makes sense. As time goes on, more unstable, casual romances will end, leaving a higher percentage of strong, stable relationships.

The study focused exclusively on relationships that have lasted at least three months and whose members were at least 23 years old. He also didn't include anyone who was listed as "married." Because the study doesn't take into account relationships that end before the three month mark and, naturally, ones that aren't "Facebook official," couples doing shorter flings or who are a bit more private are left out.

Here's a graph showing the "estimated probability of a relationship surviving to a certain duration, for relationships lasting three months or longer." 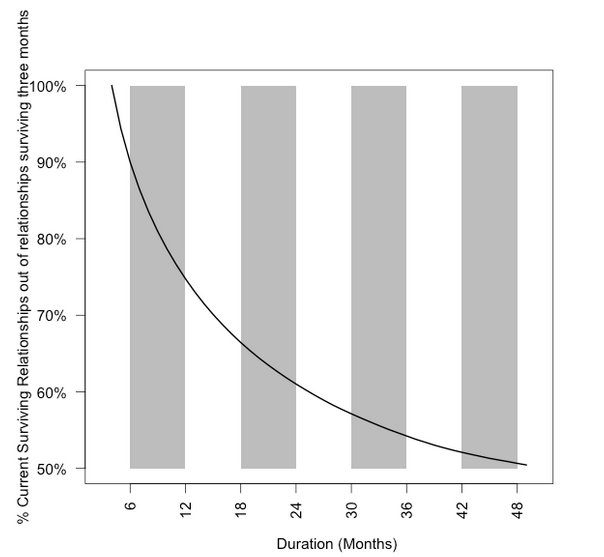 The study also looked at pattens of breakups, and found that relationships are most likely to end during the summer compared to other seasons. Perhaps the academic calendar year, which draws people away from current lovers as college ends or graduate school begins, is at play. There was also an acceleration of breakups through the year 2011. "Could it be that a rebounding US economy played a role?" State asks. Somehow we doubt that.

Facebook's penchant for trying to predict relationships starts with its founder. According to the 2010 book "The Facebook Effect" by David Kirkpatrick, Mark Zuckerberg, in his spare time, found that "by examining friend relationships and communications patterns he could determine with about 33 percent accuracy who a user was going to be in a relationship with a week from now." He did it by looking at "who was looking [at] which profiles, who your friends were friends with, and who was newly single, among other indicators."