As you probably know, many Facebookers are posting a notice claiming that Facebook owns their data, words, photos and videos. The status, widely copied and pasted, then goes on to forbid Facebook from using their stuff. 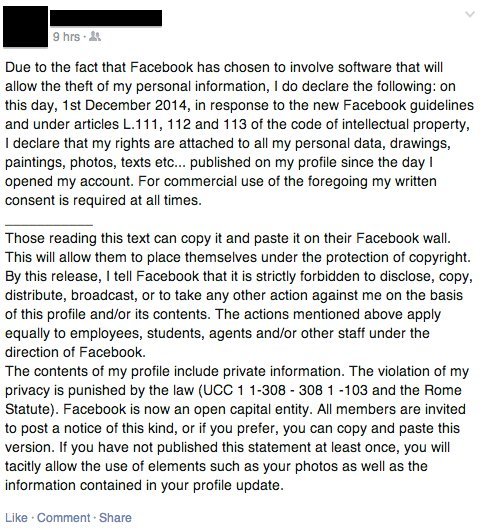 "There are so many things wrong with this notice, it’s hard to know where to start," Derek Bambauer, Professor of Law at the University of Arizona James E. Rogers College of Law told HuffPost via email on Tuesday.

The laws cited don't even make sense, according to Bambauer. "It’s not clear what articles L.111, 112, and 113 of the 'code of intellectual property' are - Facebook’s [Terms of Service] operate under US law, where copyright is in Title 17 of the US Code," Bambauer said.

That's it. You own everything you post on Facebook. You do give Facebook "a license to use and display that content" when you post it on the site. Facebook is "using" your profile picture when it shows that picture to people as "someone they might know." That's not the same as giving Facebook the copyright, which would allow them to do whatever they wanted with the photo.

This urban legend, as Bambauer calls it, has been around for years in different forms. People were posting statuses like this back in 2012, and there's even a page on Snopes debunking it.

So don't post that status, even if you feel like it "can't hurt." It will make you look silly.