There is no "Obamacare tax" added to your bill when you shop for outdoor gear. But you may not know that from reading Facebook.

In January 2013, that rumor began spreading on Facebook after a receipt from the hunting and fishing store Cabela's listed a "medical excise tax," supposedly levied as part of the Affordable Care Act. A photo of the receipt was reshared over and over. The sporting goods store later said the line about an Obamacare tax was due to a software glitch. 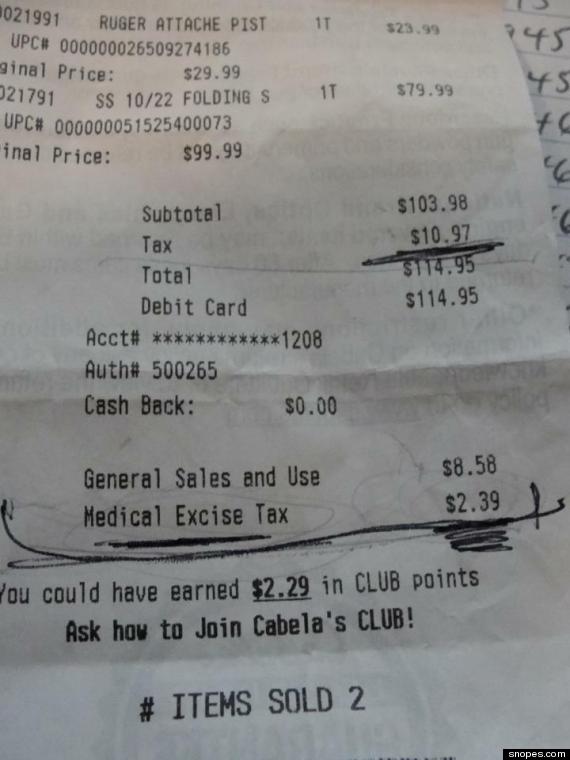 A group of researchers from the social network and Stanford University set out recently to understand Facebook rumors like this one. The team traced how rumors propagated in over 16,000 images, including the Cabela's receipt, that were uploaded and reshared on Facebook in July and August of 2013.

The researchers looked at photos where someone had commented with a link to Snopes.com, a website that verifies and debunks stories shared around the Internet. Essentially, the team found a way to spot the times when someone on Facebook says "Check out this crazy story" and another person responds "Not so fast."

The researchers found that rumors are much more viral than regular photos uploaded to Facebook. And some of those 16,000 pictures, including the "Obamacare tax" receipt, really blew up. Below is a picture from the research, showing a visual web of reshares of the receipt photo in the summer of 2013: 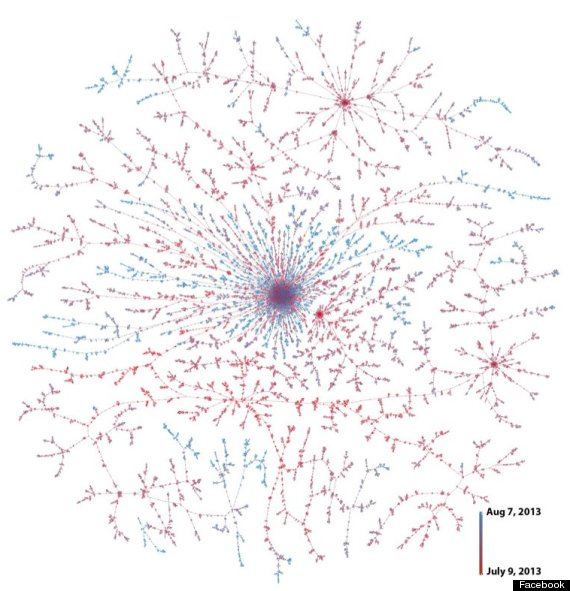 But the study also includes some heartening news: True rumors, as determined by Snopes.com, spread more widely than false ones, garnering on average 163 reshares, compared to 108 reshares for false rumors.

When comparing to Snopes.com's collection of Internet rumors, Facebook and Stanford found the most rumor-prone topics included politics, crime, medicine and food stories.

Another finding? Even without a "Dislike" button, shame is a powerful force on Facebook. In the sprawling graph above, the team observed that many people deleted the Cabela's receipt from their Timelines once they saw it was debunked.

Once someone commented on a false rumor with a Snopes.com link, the poster was four times more likely to delete the photo, the researchers found. The rate actually was just about the same for true stories -- meaning people were prone to delete even accurate information once someone commented with Snopes.com, according to Adrien Friggeri, a computational social scientist at Facebook and co-author of the study.

"We speculated that, in many cases, this may be because the person was made aware that it was a known (and possibly old) rumor," Friggeri said. "People may want to share novel information with their friends, and links to Snopes can reveal it is not so novel."

And even though all this false (and some true) information is being scrubbed away, rumors have a way of persisting on the social network even after individual Facebook reshares are discovered to be old or wrong. Another meme the group followed was "money bags," in which a person claims that a particular month has five Fridays, five Saturdays and five Sundays, and that that calendar event is rare. (In reality, it happens about once a year, according to Friggeri.) 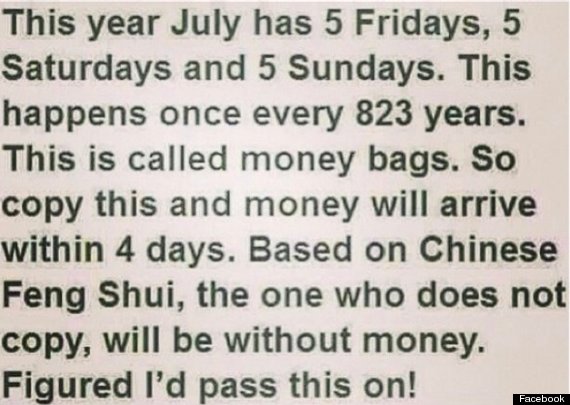 The graph below charts photos that included the "money bags" rumor. They cropped up frequently throughout the year, during both months that did have five Fridays, five Saturdays and five Sundays and months that didn't: 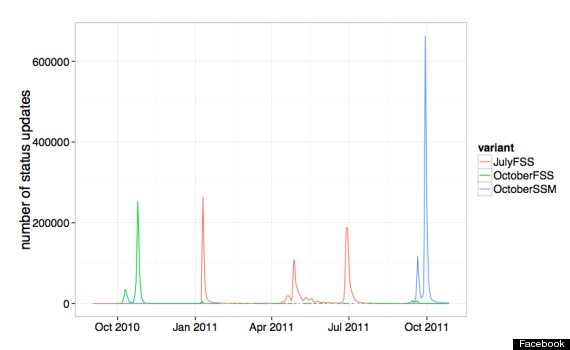 Facebook had no comment about how it may apply its findings to honing the algorithm that decides what posts people see. Friggeri noted that Facebook only deletes posts for breaking Facebook's rules, not for being inaccurate.

"People are welcome to share whatever they want with their friends," he said. "Even rumors that might happen to be false."

It may be in Facebook's best interest to ferret out false information. But even without the help of a Facebook algorithm, the data scientists observed that Facebook friends were keeping each other honest. The propensity for people to correct each other when it comes to rumors is something others have noticed happening on Twitter as well, at least anecdotally.

People correcting each other is also good for Facebook, since it helps make the social network a reliable source of information.

Of course, there's a lot that the data scientists aren't seeing. If the rumor is copied and shared elsewhere online outside of Facebook's walled garden, or if it's (gasp) passed by old-fashioned word of mouth, there's no way to stop it from showing up later on Facebook.