New data about Facebook shows that articles with sexual references in their titles are shared far more often than other news stories.

Social media researcher Dan Zarrella, the creator of TweetPsych (a web service that creates a psychological profile of users based on their Tweets), has applied his Twitter-profiling algorithms to Facebook in order to determine how Facebook users share links.

According to the Wall Street Journal, Zarrella analyzed some 12,000 posts collected from top tech-news sites and organized the articles by theme, based on the words in the headline.

"Articles in my dataset that include sexual references in their titles, are shared on Facebook far more than the average story," Zarrella writes on his blog in a post titled, "Data Shows: On Facebook, Sex Sells."

Based on the image (below), which represents Zarrella's data, articles that reference sex in their titles are almost 90% more likely to be shared on Facebook. 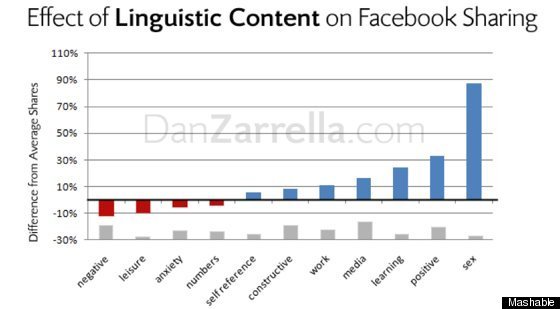 Zarrella also told WSJ that he was "surprised" to learn that positive headlines were over 30% more likely to be shared than other content. Equally surprising are the numbers suggesting that negative headlines are the least-shared.

Zarrella's data also reveals that the simpler the headline, the more it it is likely to be shared. 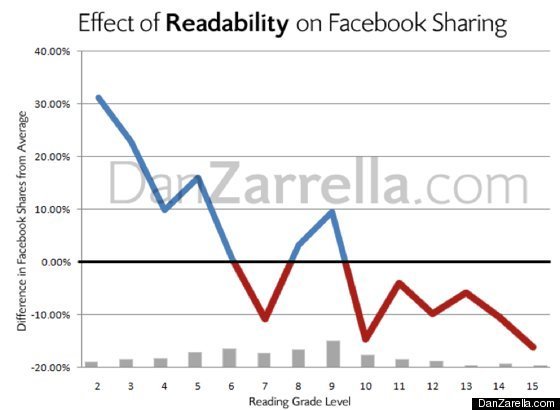 Headlines that feature second-grade reading-level words are shared 30% more than average. Generally speaking, the more advanced the reading level of the headline, the less people will share it on Facebook.

Though analysis is ongoing, Zarrella's preliminary conclusions seem suggest writing simply and positively about sex is a likely way to get your article shared.

Mashable suggests that these data will be more helpful for marketers and brands than for regular people.