On those lonely Saturday nights, you don't end up scrolling through your unemployed high school friend's Facebook by accident. There's a good, scientific reason for your creeping.

A new study from two researchers at the Ohio State University found that when people are in a good mood, they're drawn to the profiles of their successful and attractive friends. However, when they're feeling down, they lurk around the profiles of people who have had more difficulties in their lives. The findings will be published in the December issue of the journal Computers in Human Behavior.

The researchers tested 168 undergraduate students to determine how mood affects who people stalk on Facebook. First, they primed the college students to be either in a good or bad mood by having them perform a test on facial recognition. The college students were told their results were either "excellent" or "terrible," regardless of actual performance.

Next, the students were shown a fake social network called "SocialLink," which gave them the option to click on the profiles of eight fake people -- each rated for attractiveness and financial success on a five-point scale. Those who felt like losers gravitated toward the profiles of those who looked like even bigger losers. Or, in science-speak, they tried to manage their mood "through selective exposure" by making "downward comparisons" to their SocialLink friends.

Meanwhile, those flying high after acing the test tended to check out the profiles of the Glenn Tablots and Kenneth Widricks of the world, and let the light of those superstars shine down upon them. 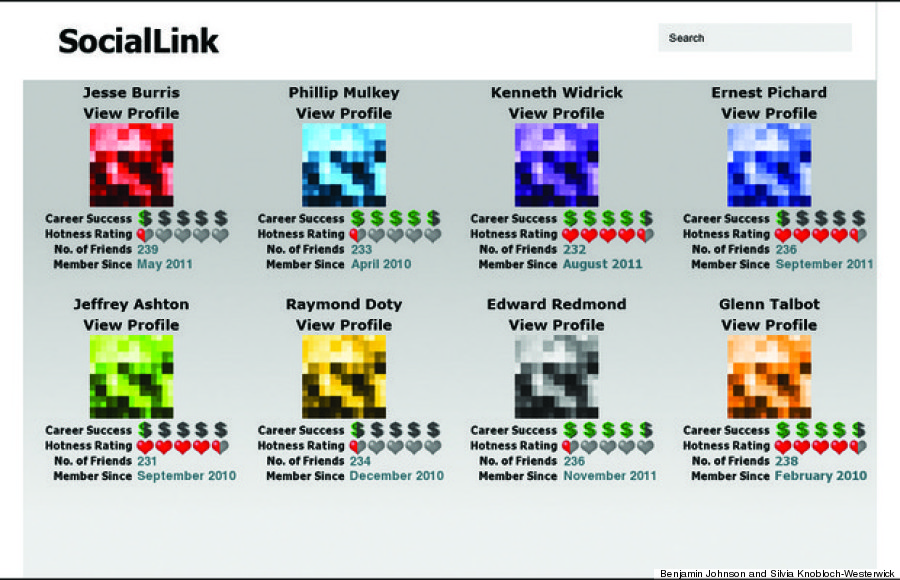 Things have always come easy for Glenn and Kenneth.

Silvia Knobloch-Westerwick, a professor of communications at Ohio State and co-author of the study, argued that her results could be generalized to real social networks like Facebook. "Our experimental site operates a bit differently, but that's a benefit of doing experiments," she told The Huffington Post. "It gives us more control over what features influence the browsing behavior. [Other] studies rely on survey responses at a single point in time, which makes it harder to show cause and effect."

So next time you shave acquaintances off of your friend list -- and you really should -- make sure not to purge just everyone, in case you find yourself in need of a dose of schadenfreude.