Thanks to the startup boom, we now have a hip new way to lose money: A social network called Tip'd Off that bills itself as a Facebook-like service for stock trading. “Peers can help you make money in the stock market," according to its website.

The company launched its beta site last month and says it'll be publicly available in February.

Like most startups, Tip’d Off bills itself as a solution to a problem: “Investors don’t really know who to trust for reliable stock advice,” Ankush Saxena, the CTO and co-founder of the Mountain View, California-based company, told The Huffington Post. “There are great traders out there who do consistently beat the markets, know how to navigate the swings,” Saxena said.

Tip’d Off’s solution: You join a social network that includes great traders, follow them to see their trades, tips and ideas, and link your brokerage account to the site if you choose to. When you place a trade in your brokerage account, it’s posted to Tip’d Off and your followers are alerted. You can also do paper trades, effectively using play money to simulate real trades. The idea is that the more useful information and tips you share, and the more you trade, the more people will follow you.

It’s an old-school stock-trading message board, basically, of the sort that has been around for decades, with the same potential for misinformation and illegality. This one just has the shiny new veneer of VC funding, some social-networking and mobile-gaming jargon, and what appears to be no clear revenue plan. Tech is hot, social is hotter, and stocks are red hot: Venn diagram that up, add some code, and Tip’d Off is born. 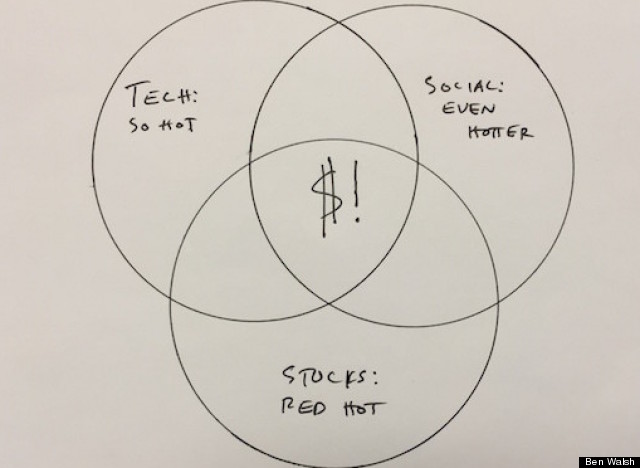 Tip’d Off is an unfortunately zeitgeisty permutation of the "loser’s game," the wonderful term Henry Blodget coined for the pervasive, recurring and false idea that individual retail investors can make money picking stocks or timing the market.

Tip’d Off also claims to solve a more novel problem: “There’s kind of a challenge to monetize there,” Saxena said. “Non-investment advisers can’t build a reputation based on their trading acumen and monetize their skill set.”

Of course, there is already a very easy way for good traders to make money, and that is by trading. Traders don’t need an app to help them “monetize” their “acumen” -- the stock market already exists. Put simply: Good trading is what makes traders good. And it’s not an indelible quality: Performance fluctuates. The most probable outcome is that people who have great returns one month or one year have not-great returns the next month or year.

Anyway, to solve this non-existent problem, Tip’d Off promises it has a way for you to make money off your reputation as a good trader. Once you’re a Tip’d Off member, you have the chance to be given “pro” status by the company, and get paid by the number of people who follow you for tips.

This does echo something that happens in the real world: Warren Buffett and Bill Ackman have the power to make stocks rise or fall, simply because of their reputations. Carl Icahn tweeted that he owned Apple shares and the stock rose 4 percent in an hour. But that sort of success is rare, and it is based on past actual success at investing.

But the people who will use Tip’d Off to make money from their reputation probably won’t be good traders. They’ll just be good at seeming like they are good traders, saying all the right words about the right stocks with a smooth blend of equanimity and conviction. And they’ll be wrong -- a lot: 79 percent of U.S. stocks funds did not beat their benchmark this year, the Wall Street Journal’s Jason Zweig reported.

There’s no reason to think Tip’d Off’s “pro” users will be any better, and lots of reason to think they’ll be worse. But as long as they have a lot of followers, the stock-fluencers will get paid.

Among financial types, the phrase “talking your book” means promoting your own investments and convincing other people to join you. On Tip’d Off, you don’t just have to talk your book: your book becomes talking your book. Your reputation alone can be lucrative. Sure, you could also make some good trades. But again, if you can do that, why do you need Tip’d Off? The stock market itself is a far more lucrative place to leverage trading skill (if trading skill is even a thing that exists).

Do yourself a favor and just buy a low-cost index fund, or use a money-management startup that actually helps people, like Betterment or Wealthfront.