WASHINGTON -- An innovative study released Monday by a Facebook advertising firm suggests that Republican candidates can best attract online clicks with ads aimed at President Barack Obama generally rather than about the economy or other specific issues. It also confirms that Sarah Palin continues to be a bigger magnet for online pageviews than the other announced- and potential-Republican presidential hopefuls.

Conventional polls attempt to sample members of some larger population and measure their political attitudes by asking questions.

SocialCode, the Washington Post subsidiary that conducted the study, did something very different. They placed Facebook advertisements in Iowa and New Hampshire featuring Republican candidates and messages, then measured how often users clicked Facebook's "like" button to endorse and share what they saw.

The results are worth a look, but to be clear, the data does not reflect the views of a representative sample of all voters in Iowa or New Hampshire voters or even of Facebook users in those states. So one cannot tell from this sort of data which candidate is leading or likely to win. What these results can provide is both a sense of which of the candidates might immediately benefit from placing Facebook ads and which bumper sticker-style ads would be the most likely to get users to click on them.

To better understand the results, it helps to begin with the methodology. Facebook allows advertisers to target their users geographically, which enabled SocialCode to buy batches of ads in just Iowa and New Hampshire. Each ad combined one of eight photos -- featuring Michelle Bachmann, Newt Gingrich, Jon Huntsman, Sarah Palin, Tim Pawlenty, Mitt Romney, Ron Paul or the GOP's elephant logo -- and one of five one-line messages focused on the economy, healthcare, national security, values or general opposition to Obama. The ads ran between May 23 and June 4.

The two examples below show how the Facebook ads combined candidates with messages. Notice that each advertisement also encouraged users to "Click 'LIKE' to show your support!" 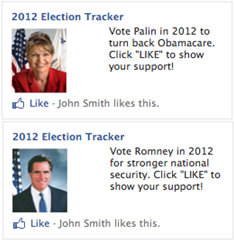 SocialCode tracked three pieces of data about each advertisement: How many times Facebook displayed each ad (the number of "impressions"), how many users clicked on it and, more specifically, how many hit "like" for each one. According to the SocialCode release and data provide separately to The Huffington Post, these statistics produced the following findings:

So what do these results tell us?

First, they suggest that Sarah Palin's fans in Iowa and New Hampshire are more likely to interact with web advertising and click that they "like" her on Facebook. That observation will come as no surprise to those who follow web traffic. The Google Trends service, for example, shows that searches for Palin have long exceeded searches for the best known potential Republican presidential candidates.

Of course, as with conventional polling, online popularity can change as some candidates gain recognition during the early primaries. So Palin's early advantage may not persist if she opts to run.

Second, this sort of data can also help guide a campaign on how to generate more click-throughs with their online advertising. In this case, it tells Republican campaigns that they will get more clicks with a general anti-Obama message than with messaging on the economy, national security or values.

One important reality check: While SocialCode purchased over 74 million advertising impressions for this project, those display ads were clicked on less than 16,638 times and liked just over 5,192 times. That means that just 0.02 percent of the ads were clicked on at all and only 0.007 percent received a "like." So the online clicking being assessed here represents just a tiny sliver of the Facebook users in Iowa and New Hampshire.

That's the bad news. It confirms that this sort of data falls far short of conventional polling in terms of its coverage. The issue is not that the sample is small, but that it cannot be considered representative of some larger population. This type of sampling is certainly not appropriate for trying to measure the views of the general population.

The potential good news -- for political campaigns, at least -- is that the small number of Facebook users that do click on ads are exactly the sort of people they are trying to reach with online advertising. Campaigns are using online advertising to connect with potential donors and volunteers, and they want to understand what will increase that response.

That's what SocialCode claims its research can deliver.

"Social media works when it comes to reaching voters who are researching issues online, reading blogs and debating issues with friends on Facebook," SocialCode General Manager Laura O'Shaughnessy said in the press release announcing the results of the study. The company's method, she adds, aims to get "the exact right ads in front of users."

Speaking at the annual conference of the American Association for Public Opinion Research in May, the organization's outgoing president, Gallup Poll editor-in-chief Frank Newport, noted a paradox spurred by the emerging social media.

The SocialCode project may not be a poll -- and thus cannot tell us who is leading in Iowa or New Hampshire -- but it is a new and insightful way to measure opinions about political messaging.