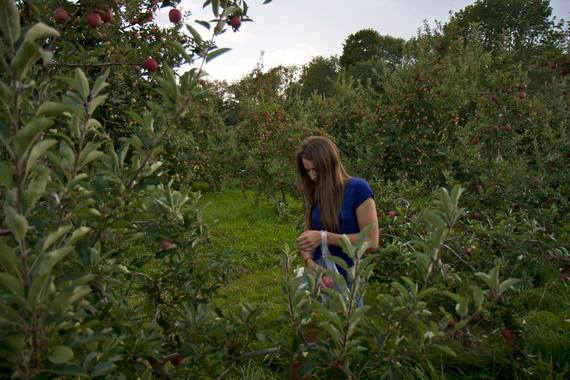 I clicked on his picture, and of course it was him. The same eyes. Same goatee. He is in a relationship. He has two children. At first, I got sick and then the tears came. I wasn't panicked or scared like I used to be. This time every crevice of my body filled with pain. This is a different pain than grief. It's not like when someone dies or you lose an important relationship, and you feel like it might be impossible to go on without someone. No, this is the pain of living with the knowledge of that person for so many years. This is the pain of having gone on, having lived and survived despite them and what they took from you. This is the debilitating pain and recognition of all of the women who have been raped, who are being raped, and who will be raped. And we always will.

At first I didn't recognize him. It's incredible how our bodies, our minds, try to protect us. The person who has haunted me most, impacted every decision I've ever made, who taught me what real fear was, and I still thought, "No, that's not how he spells his last name." It's because Facebook says that he's 32 now. It's funny, over the years; I've made him older. I always thought, or rather, began to believe, that when I was 13 he was 18, but that's not true. He must have been 16 about to turn 17 when he raped me, and the reason I imagine him as 18, is because that's the last time I saw him. His birthday is July 11th. I remember every year. Of course he was 16.

The crazy thing is that I was shocked, disgusted even by my reaction. It's hard to admit that even after all those years, all of the therapists, the time in college when I, myself became a rape crisis counselor and victim advocate, that I am this affected. I am not the 29-year-old robot woman I wanted to be. I say I'm not angry anymore, and in a way, that's also true. My skin is no longer on fire and the burning hatred I once felt for him, for men like him, only ignites in rare instances when I've let my guard down. I no longer have flashbacks during the day, or need to be heavily sedated at night so that I don't harm myself during a night terror. But I still have "the dreams." And if you are a survivor, you know. Mine are usually along the lines of being a patient who is paralyzed in the Emergency Room, and he is the doctor, but I am unable to communicate this to anyone. Now, this mostly only happens when I'm anxious.

I texted my then-boyfriend, because I didn't feel like I had the energy to speak, but I needed someone to know. He said that he was so sorry. A few hours later, he called me on FaceTime. When he saw me crying, he asked what was wrong. And in this moment I recognized that people just don't understand, not even a little bit, the trauma of rape. We see it on TV and in movies and in video games. And, we deny that it happens, and we cover it up, and we don't talk about it. Or maybe we do talk about how it happens to "those girls." Or how it's rare... or how it's just sex. People, who have not survived this damage, don't understand the violation. They don't understand that I would rather be dead than live through that again. I don't say this lightly. I am not suicidal or depressed. I have a beautiful and strong relationship with my higher power. I believe in my purpose in this world. But I believe that in my core, I would not survive it. You can't explain that to someone. Nor, do I really want the people I love to understand the kind of brokenness I'm talking about. No one should have to know this wreckage. My then-boyfriend asks if I am angry with him, and I say no, because I'm not, but I am shocked that it didn't occur to him, that it doesn't occur to people, what is wrong.

I think about how people view women who are angry. Women who say things that are honest and uncomfortable. I think about the time in my Masters of Fine Arts program, during a workshop discussion of Adrienne Rich's poetry and politics, how I pointed out that men use their penises as weapons. And while this is simply a fact, as someone has certainly used their penis as a weapon against me, as there are documented cases of mass rape being used as a war tactic, some of the men in my class became very agitated and upset with me. My friends. Almost as if I was accusing them. One of my friends even suggested that this desire was due to natural urges. I think about the consequences of being this woman. The reality I have endured since high school. What it always comes down to is that I simply cannot be any other way.

My then-boyfriend says that he didn't know what to do or say. Which is refreshing, because it's honest. And I say, I know, and that I just wished that he were here with me right now. A younger me would have asked him to come over, even though it was late and he lives 45 minutes away. Even though I knew he had a busy next day at work. He doesn't offer, and I don't ask him. The difference is I want him to be here, but I don't need him. The tears are unstoppable. It's mostly quiet crying, just a constant wetness. I tell him that I feel stupid that it's impacting me like this, and he says what I am already thinking, which is to imagine what I would say to a woman who I was counseling, a woman who was experiencing this moment. I would say that it's normal. That it's okay to feel like this. I would say to take your time. That healing is never linear. That it's not fair. I would ask her what she needed. I would ask her what I could do for her in that moment. I would say that even though there's still a part of her that believes it was her fault, because she snuck out, or she did drugs, or she gave mixed signals, that it's not her fault. I would tell her that she's not alone, and that she doesn't have to go through this alone. I would hold her, and we would just be.

He says that he hopes that I can get some sleep, and I say that I'm afraid to go to sleep. That I'm afraid of the dreams. I want to say that I see my rapist's new, older face now every time I close my eyes, but I don't. My then-boyfriend says that dreams don't really work like that. He says we don't necessarily dream about the things we're thinking about before we fall asleep. I say that this isn't my first rodeo. I want to say, that I know my body. And I know that the dreams will come, and this isn't some sick self-fulfilling prophecy, it's just a fact. What I hear (though this is not what he means to say) is that he thinks that I can control this. He says that I can call him anytime. But I won't.

The next morning I woke up, I prayed, I read my morning meditations, and I blocked my rapist on Facebook. I decided that I would rather have his name written permanently in my privacy settings than have to see his picture. I note our mutual friends. I think about what he told people at school after I had been kicked out, and he knew that it was only a matter of time before I told someone the truth. He told people that I was begging for it.

I am okay in the sense that I will do my work, and meet my friends, and continue on trying to help people and to do the next right thing. But as the scar tissue thickens, there's aftershock. I put the teakettle in the refrigerator. I spilled hot, wet coffee grounds all over my kitchen. And despite this bizarre fragility, I feel an incredible hardness beneath my skin.

This essay is reprinted with permission by Luna Luna Magazine, where it first appeared.

Sarah Marcus is the author of BACKCOUNTRY (2013, Finishing Line Press) and Every Bird, To You (2013, Crisis Chronicles Press). Her other work has appeared or is forthcoming in McSweeney's, Cimarron Review, CALYX Journal, Spork, Nashville Review, Luna Luna, and Bodega, among others. She is an editor at Gazing Grain Press and a spirited Count Coordinator for VIDA: Women in Literary Arts. She holds an MFA in poetry from George Mason University and currently teaches and writes in Cleveland, OH. Find her at sarahannmarcus.com.