First the Winklevoss twins sued Mark Zuckerberg. Now, it looks like Facebook is poised to do the same.

Facebook is threatening to sue Mark Zuckerberg, an Israeli entrepreneur who recently changed his name from Rotem Guez to "Mark Zuckerberg," according to Zuckerberg's site MarkZuckerbergOfficial.com.

"No it is not a joke," Zuckerberg wrote in an email to The Huffington Post. "I am now legally Mark Zuckerberg, and it's for the next 7 years :)"

The twisted tale of Zuckerberg vs. Zuckerberg started after Zuckerberg, formerly Guez, launched a Like Store that sold Facebook "likes" to companies, a transaction that violates the social networking site's policies.

First, Zuckerberg, formerly Guez, sued Facebook over its failure to return his "hacked" profile. Next, a lawyer from Perkins Coie representing Facebook wrote a letter to Zuckerberg, then Guez, in September, warning him to "immediately stop your activities." The lawyer asked Zuckerberg to confirm before Sept. 5, 2011 that he had "stopped and will not in the future access Facebook's site, services, platform, or network for any reason whatsoever," among other stipulations.

In early December, Guez claimed he officially changed his name to Mark Zuckerberg and has posted pictures of his ID card and passport to prove it. He also recorded a video that he says documents his visit to the Ministry of Home Affairs to change his name.

In an email to The Huffington Post, Zuckerberg offered the following explanation for his name change:

Facebook decided to sue me after i myself, filed a law suit against them, in Israel. i wanted that once they sue me, they'll face suing "Mark Zuckerberg". Facebook accused me of selling ficticious "Likes", which is not true, our "Likes" come from real users who want to receive our content, and instead of paying us with money, they pay us with "Likes". The idea was, if only "Mark Zuckerberg" is allowed to sell likes, then for that matter, i'm "Mark Zuckerberg".

A week after Guez became Zuckerberg, Facebook's lawyer followed up with another letter "demanding that you stop violating Facebook's terms."

"If you ignore this letter and continue your current improper conduct, Facebook will take whatever measures it believes are necessary to enforce its rights, maintain the quality of its site, and protect its users' privacy and information," the Perkins Coie lawyer warned.

In violation of the lawyer's mandate, Zuckerberg is still on Facebook. He has created a Facebook page titled "I'm Mark Zuckerberg" and has shared images of himself, his personal documents, and newspaper clippings.

Zuckerberg said in an email that he thinks highly of Zuckerberg, the founder of Facebook.

i think Mark Zuckerberg is a genious. i think he cares more about controlling the world and controlling our databases, than making money. Facebook and M.Z. have to understand that Facebook is not just any ordinary site it, along with Google, is the main avenue of the internet. They have to take on Google's example, not to erase content they don't aprove of. Google catorgorizes such content where it thinks it belongs, it doesn't disable accounts and erase content. 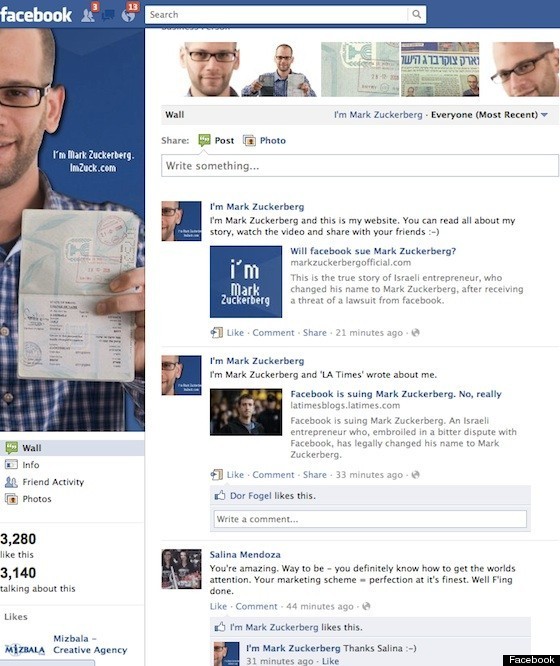