Many of Facebook's 1.44 billion users turn to the social network for their news, but there's a little quirk with how it handles headlines.

A feature has long existed on the social media platform that allows individuals to completely alter the text of an article's headline and sub-headline when posting it onto their profile or News Feed.

Reached for comment, a spokeswoman for Facebook told The Huffington Post that the feature was introduced in 2011 to allow individuals to fix fields that did not display correctly. At the time, Facebook didn't always produce the correct headlines, sub-headlines or images when a link was posted, so a user needed to be able to edit them.

But there's a pretty major downside. Because anyone can edit a headline, it's easy to misrepresent the news and a publication's intent. That means confusion or, worse, the spread of false information.

Asked about the potential for headlines to be distorted, the company told HuffPost Monday that an update to this feature may be coming.

"We’ve improved our automatic rendering technology so that most of the time, the link sharing preview does generate a title and description that accurately reflect what people want to share," a spokeswoman said.

"As a result, we’re considering changing this feature to better align with how people share links today and to help ensure that publishers’ content is not misrepresented,” she continued.

Here's why that matters. As of now, it's painfully easy to create the impression that news organizations are reporting false stories:

One could even make it seem like The New York Times has issued a correction on its polarizing story about pea guacamole:

It's easy to be playful, but sometimes there are some not-so-great consequences.

Here's a real-world example: Two weeks ago, comedian D.L. Hughley, a celebrity who often appears on news programs to offer political commentary, shared a HuffPost article about Bristol Palin's recent pregnancy announcement. But, somewhere along the line, someone had completely changed the headline and sub-headline to make the article seem like it was about the race of the baby's father. 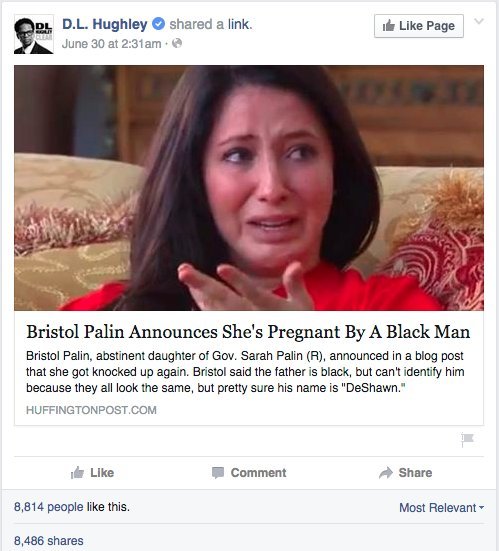 HuffPost's actual story doesn't mention race in any way and doesn't speculate about the identity of the father. To be clear, actually clicking on the false headline still brings you to the real article, but the problem is that many people won't care to do so.

A representative for Hughley told HuffPost that he simply shared the bogus version of the article's headline after seeing it in his News Feed.

We were able to confirm that this particular edit of the article had been posted to Facebook by a separate page on June 26, a few days prior to Hughley's "share." It seems that page eventually deleted its post, but the damage had been done: The bogus version of the link was shared over 8,800 times from Hughley's page. (The post was still up on Hughley's page, as of Monday evening.)

That's concerning because it gives fuel to racist jerks, for one thing: 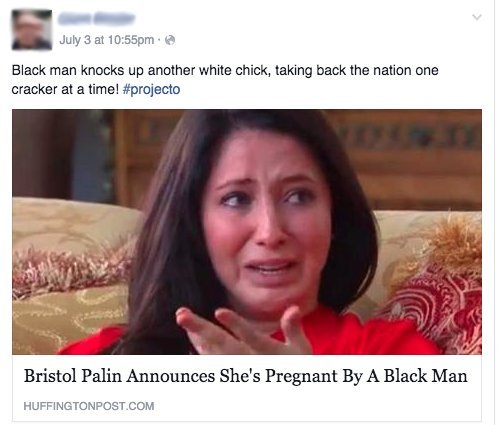 It also prompts people who don't know any better to spread misinformation.

The article about Palin's pregnancy isn't likely to incite a nuclear war, but it contains information about a public figure who could, for example, follow in her mother's footsteps and run for office one day. The doctored version of the article reached thousands upon thousands of people and untold numbers of people who are friends with those individuals who shared it.

While Facebook considers a fix, there's a lesson to be learned: Skepticism, as ever, should prevail when you glean information from your News Feed, as a huge number of people do every week.

And please: Be kind when messing with headlines.