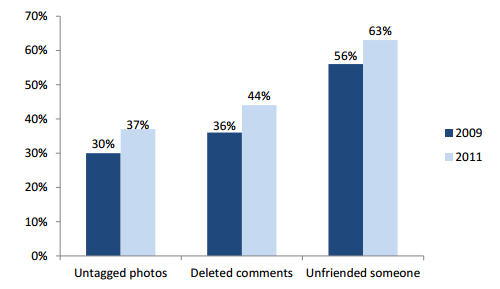 Percent of social networking users who have taken these steps to protect their privacy (Source: Pew Internet & American Life Project)

When it comes to social media privacy, there is some good news from the Pew Research Center's Internet & American Life Project. It shows that Americans are increasingly thinking about their own privacy and reputation management. Which, at the end of the day, is the most protective factor of all.

A new report, Privacy management on social media sites, found that people were more likely to use basic privacy features in 2011 than they were in 2009. The study also found that only 2% of Facebook users felt that it's "very difficult" to use privacy controls. Forty nine percent say that it's "not difficult at all," though 48% said they experienced some level of difficulty.

In general, teens and young adults are more privacy conscious than older people.

The study found that:

It also found that 58% restrict access to their profiles and that women are significantly more likely to use privacy setting than men (67% vs 48%).

Privacy is the norm & teens are leading the way

Women and young adults more likely to prune their lists

The survey also found that young adults are more likely to delete comments, and remove tags.

The Pew Report came out the day after the Obama Administration released its Consumer Data Privacy in a Networked World report (PDF) that includes a proposed Consumer Privacy Bill of Rights that the administration plans to send to Congress. As important as they are, these rights can't completely protect user privacy. Even the most stringent privacy policies and government regulations won't protect people from posting things they may regret if people are not thinking carefully about what they post. Regardless of the regulatory environment, media literacy and critical thinking remain the the most important factors when it comes to protecting our privacy and safety.

For those who need a bit of help with Facebook's privacy tools, Anne Collier and I just updated A Parents Guide to Facebook which not only has parenting advice, but step-by-step instructions on how to configure Facebook's privacy settings. You can read or download a free copy at FBParents.org

Disclosure: Larry Magid is co-director of ConnectSafely.org, a non-profit Internet safety organization that receives financial support from Facebook and other social networking companies.