...And promptly goes out of business.

I've crudely plotted Facebook's user growth in an old notebook, ignoring all sorts of factors that I don't know: attrition rate, macroeconomics, tech scalability, global warming, and the number of cat videos on the Internet. (At Facebook's size I'm not sure if any of these factors matter. Facebook is big!) 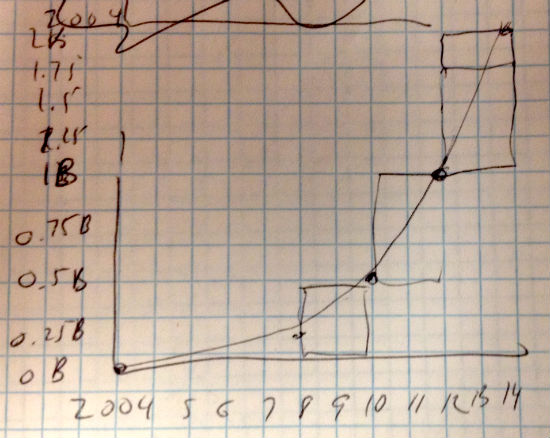 It's clear to me that at the current rate of growth Facebook will announce it's two billionth user in late 2014. (The accuracy of this prediction is slight better than my Tarot cards but not quite as good as my Ouija board.)

Mark and his team need to figure something out fast. I'm here to help. Imagine I'm a formerly evil terminator reaching out my cyborg hand to a startled, frightened Facebook, his eyes as big as saucers while two billion users mindlessly Like and Poke each other as they ignore ads and promoted posts. "Come with me if you want to live," I growl.

There is an idea popular in all the Silicon Valleys, Alleys, Beaches, Deserts, Forests, Hills, Prairies, Shires, and Slopes, that "more users fixes everything." This hair-brained theory states that all users are good users and that big users numbers can solve almost any problem, such as:

Advertisement
"More users fixes everything" is a myth and Facebook, with its relentless drive to friend everyone on the planet, is just about to become a giant object lesson in another theory well known in Silicon Valley: The
Law of Diminishing Returns
.

I doubt Facebook has a problem with managing the cost of all its users. With advances in data center technology, the continued influence of Moore's Law, and hordes of brainy hackers, each new user that Facebook adds to its network costs less and less than the previous user. This is the Law of the Economies of Scale in full effect.

The problem is the diminishing value that each new user adds to the Facebook business model. In the run up to two billion, Facebook hopes that each new user will bring in more value than the previous user. But Facebook doesn't know this for sure as it already has more users than it can count. As Mark admitted last week, Facebook estimates it has one billion users, but even this number is uncertain because it's too much data to manage.

Our brains are geared to deal with human scale problems. We can't count to a billion. A computer can count to a billion but computers are only as smart (or dumb) as the humans who program them. If I can't properly account for and understand my one-billionth user then that user is worth less to me than my one-millionth user. Instead of knowing my users, I can only guess, or estimate, with less and less accuracy, who my users are and what they need. My one million valuable users get lost in the noise of the average one billion users.

It's the Law of Diminishing Returns in effect.

I believe the myth of "more users fixes everything" is why previously social networking companies failed. MySpace and Friendstr didn't die because they were ahead of their time or poorly run. They died because the mega-loads of users aggravated fundamental problems with their mission, lack of working capital, and lack of a scalable ad business.

Luckily for Facebook, there is still time! Two years to turn this all around!

Here are my suggestions for how Facebook can survive its rampant and uncontrolled user growth:

An athletic woman runs barefoot down the grim corridor of a prison hospital sprinting for the elevators. Just as she arrives an elevator door slides open to reveal her worst nightmare: A time travelling cyborg who looks oddly like the former Governor of California. The woman flees in terror and runs into a mob of burly hospital orderlies. Like maniacal Mr. Cleans the orderly grab the woman and holder her down while a pathetic and unhelpful psychiatrist preps a needle full sedatives. But the woman isn't really concerned with the orderlies or the doctor. The Terminator bats the orderlies away like flies, reaches out his cyborg hand, and says, "Come with me if you want to..."

"Hey Sally!" Bob exclaims. "Why did you turn off my movie?"

"We have a problem," sighs Sally as she drops on the sofa. "I got the data feed from the Facebook social graph and its too many objectives for me to parse. The dataset we're interested is too big. Our AWS cloud bill is going to be huge!"

"Relax, you'll think of something." Bob sits up and turns the video stream back on. "This terminator movie is so educational. I learn something new every time I watch it!"