As more and more internet users shift their online time to mobile devices, Facebook ubiquitous app becomes the first click point of entry for social surfers. Facebook is for many a social network, a communications network, a news network and a publishing platform. The data makes this dramatic revolution: 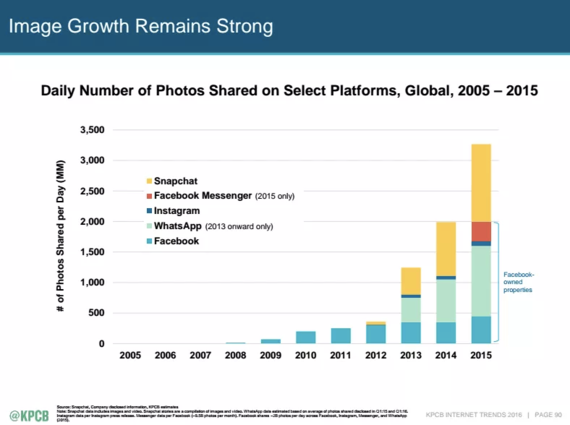 Mary Meeker's landmark 2016 Internet Trends Report lays out in stark contrast what we've all been feeling. While smartphone usage continues to grow, 80 percent of time is spent in just three apps. Millennials and Generation Z are using Facebook, Snapchat and Instagram to the detriment of almost all other apps. Visual computing and storytelling is driving the most active users.

So, when Facebook announces that its going to tweak its algorithm - and diminish the amount of professionally created and published news in the newsfeed - mainstream media prepares itself for an inevitable downward impact on traffic and inevitably revenues.

The question is - why? Why does Facebook feel that its massive audiences wants less news? And perhaps more interestingly, why won't Facebook let individual users decide that for themselves?

It's important to remember that Facebook already gives users lots of controls over its newsfeed. You can now "unfollow" a friend whose posts annoy you. You can choose to "see less" of a story, and even pick which friends you want to "see first." Of course, you need to be a somewhat sophisticated user to use those granular features. You have to click the gray down arrow in the top-right corner of a post to see those choices. Facebook considers the Newsfeed a work in progress - testing new ways for users to modify the feed, including topic-based news feeds and even the modification of the powerful "like" button.

So - the question that is hanging in the air, and bouncing around lots of mainstream media newsrooms and boardrooms is this: Why not let USERS control how much news they get, and which are sources they favor? It's a question that has the potential to impact the very essence of free speech and even potentially how free and open journalism impacts our democracy.

Adam Mosseri, Facebook's vice president of product management, explained it this way: "Our success is built on getting people the stories that matter to them most.If you could look through thousands of stories every day and choose the 10 that were most important to you, which would they be? The answer should be your News Feed. It is subjective, personal, and unique--and defines the spirit of what we hope to achieve."

Translated, what Adam meant was you would see more posts from your friends and family, and less from mainstream publishers.

Now, to be clear - Facebook already has a system in place to get data to modify the Newsfeed. A human system. The "feed quality panel" was launched summer 2014. As Facebook explained to Slate, qualitative human feedback grew from a handful of paid survey members to a national and now global panel of users.

As Slate reported: "the algorithm is so precious to Facebook that every tweak to the code must be tested - first in an offline simulation, then among a tiny group of Facebook employees, then on a small fraction of all Facebook users - before it goes live. Diagnostic tools are set up to detect an abnormally large change on any one of these crucial metrics in real time, setting off a sort of internal alarm that automatically notifies key members of the news feed team."

So why doesn't Facebook invite users to provide content specific data? Why not let users turn up or down news content? Why not let users highlight sources that they like, or dislike - given users granular control over the content in their news feed? 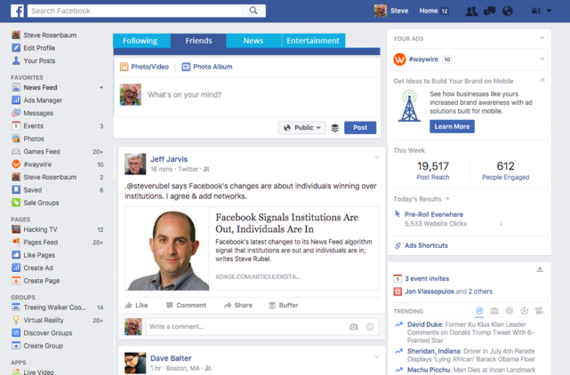 If Facebook is to be the feed that fills our mobile devices, why not give users the equivalent of channel changer. Here's an example of how the Newsfeed could become a multi-channel environment. Giving me some choices - who I'm following, my friends, news, and entertainment - could help me tell Facebook what my interests are at that moment. Or better yet, a tab for 'business' and a plan for 'social' would give me some clickable course filters to operate.