Are you ready to boogie down to your Facebook friends' music?

When one of your friends is listening to a song via a Facebook music-streaming app, you'll see a music icon next to that friend's name in the Chat sidebar (located at the bottom right of the Facebook web page). Mouse over that friend's name and a pop-up menu will appear, presenting you with a "Listen with friend" button. Clicking the button will let you listen to the song at the same time as your friend. You can also listen to songs with several Facebook friends at the same time and chat with them as you do so.

There are some limitations, though. A Facebook rep has confirmed that this feature is only available for the Spotify and Rdio apps. And you'll need to subscribe to the same app as your friend if you want to listen with him or her. As a Facebook spokesperson to ZDNET, “If your friend is listening to a song on Spotify, and you don’t [subscribe to that app]. If you click to listen with them, you’ll be prompted to install Spotify.”

The new "listen with friends" feature will post a story in the New Feed when you listen to a song with another friend. Visit the Facebook Help page to learn about how to manage your privacy options while using this new feature.

The feature is currently rolling out to Facebook's 800 million users. If you haven't received it yet, you can take a look at the screenshots below (courtesy of the Facebook Blog) to see what this new Facebook Chat option will look like when it finally comes to you. 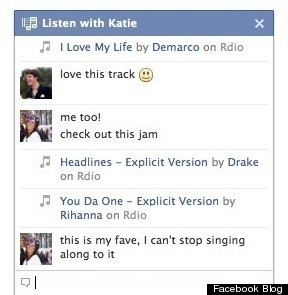 This feature was first outed ahead of the f8 conference in September, when Facebook Creative Director Ji Lee tweeted the following: "The 'Listen with your friend' feature in ticker is blowing my mind. Listen to what your friends are listening. LIVE."

At the f8 event, Facebook CEO Mark Zuckerberg introduced a new breed of social apps along with robust sharing options and said that this music-sharing feature would make its way to the platform eventually.

"Being able to click on someone's music and play it is a great experience, but knowing that you helped a friend discover something new, and that you have the same taste in music, is awesome," Facebook CEO Mark Zuckerberg said when he unveiled the feature.

However, not all of Facebook's partners are ready to embrace the social network's new features.

Pandora, for example, has recently begun to back off Facebook's social sharing. At the Consumer Electronics Show in Las Vegas, Pandora founder Tim Westergren told The Huffington Post that some of the music-streaming and discovery service had voiced concerns about having their musical preferences broadcast across Facebook in real time.

"Music, on the one hand, is a very social thing. We listen to music together, we go to shows. But I think there's also a very private dimension to it. Many people are self-conscious about what they listen to," Westergren said. "We've surveyed our listeners and a small percentage of them want people to know what they're listening to all the time. And we start with a fundamental respect for what our listener wants and what's in their comfort zone, not how we can grow or how we can increase referrals."