You might say that since ABC aired its most famous mini-series in 1977, that I have had a serious case of Roots envy. Like Alex Haley, I wanted to be able to find the ancestors on my family tree, deep into the depths of slavery. And to find the lost tribal or ethnic identity of our African ancestors, just as Haley claimed he had, would be more than I could imagine. Well, the Bible says be careful what you wish for. Now, with the digitization of a remarkable variety of public documents through companies such as Ancestry.com, and with affordable DNA tests, all of us can find out an extraordinary amount of information about our ancestors -- both our recent ancestors over the past few hundred years and our more distant ancestors, thousands of years ago.

After producing two PBS series devoted to African American ancestry, African American Lives and African American Lives 2, in which I traced the family trees of nineteen black people, I received a letter from a woman who described herself as eastern European and Jewish, asking me why I didn't trace the ancestry of people with her background? Why, she asked, should black people have all the fun? I had also received many letters from people of West Indian ancestry, asking if the techniques that we used on African Americans would work on their ancestry as well? So, I decided to do a new series, using what I think of as the "Noah's Ark" approach: two Catholics, two Muslims, two Jewish people, two West Indians, two Asian Americans, a Latina and a Native American, etc. And the result was Faces of America, in which we were able to uncover an extraordinary amount of information about the subjects of the film, tracing ancestors back as far as the 5th century A.D. What's more, we were able to draw upon cutting edge genetics to offer certain tests to our guests that did not even exist when I filmed my first African American Lives series just a few years ago. Most gratifying, for me, was being able to have my father's entire genome sequenced, making him the oldest human being ever to have this done.

Faces of America, now published as a book by the NYU Press, is intended to be a tribute to the true triumph of American democracy, which is the diversity of our people, a diversity that we can now measure both through the branches of our family trees and in our genes. The hunger to recreate our virtual families, certainly not a new phenomenon judging by the popularity of such reference works as Burke's Peerage and Gentry and DeBretts, would seem to be insatiable. Stuart Hall has said, famously, that cultural identities have histories; so do families, so do individuals, of course. But it is the curious relation among the histories of these three entities -- how they converge, and how they do not converge -- that makes the assembly of our virtual families so endlessly fascinating.

The Temple of Delphi posted as its motto "Know Thyself." We might amend that today to say "Know Thy History, Know Thyself." I have published the family histories of each of my twelve guests for the PBS series as chapters in the new book, in order to share the rich detail that could only be touched upon in the television documentary. The Huffington Post is excerpting a series of these fascinating stories. The following examines Mehmet Oz.

Excerpted from Faces of America

Mehmet's father -- the original Dr. Oz -- is Mustafa Oz. He was born in Bozkir, Turkey, a small town in the Konya Province of central Turkey, near the Taurus Mountains, a very rough-and-tumble place. Mustafa does not know his own birthdate, but believes it was sometime in October 1925. We could not verify the date because there are no records of his birth or that of any of his siblings. Indeed, the Konya Province produced almost no written records in this era. 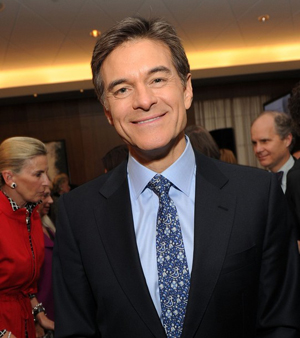 Mustafa was one of a dozen children, half of whom died in childhood. His early years were almost unimaginably harsh. "My father had been born into abject poverty," said Mehmet. "I'm talking about the kind of poverty where you're not worried about passing clothes down, but you're worried about food. And that's the kind of poverty you don't forget too readily. They had to make tremendous sacrifices to survive. My father grew up knowing that the only prayer he had to succeed was to outwork everybody else. It has colored every aspect of his life. It's one of the reasons he can't retire even now, at age eighty-five."

Though Mustafa's parents were uneducated farmers, they were determined that their children would lead better lives, and they correctly perceived that education was the means to this end. Mustafa claims that he knew from a very early age that he wanted to study medicine. His supported this and he applied himself with an all-consuming zeal. At the primary school in Bozkir, he graduated at the head of class. Then, in 1938, when he was about thirteen years old, he left his town to attend a government boarding school. After graduation, he won a scholarship to study medicine at the Istanbul University Faculty of Medicine. The scholarship required that he serve at least four years as a government physician, so he took a position in the small town of Gülşehir, in the Nevşehir Province. He was soon appointed to serve in the Turkish capital, Ankara. It was a significant promotion, but his ambitions were by no means fulfilled.

Mustafa wanted to become a surgeon, which required further training. The best way to accomplish this was to find a residency at an American hospital. So he started applying. He couldn't speak a word of English, but this did not deter him. He had a secretary in the U.S. Embassy in Ankara write letters and fill in the forms for him. To the question of whether he knew English, he invariably replied "yes," hoping he would learn it quickly. Meanwhile, according to Mehmet, his father's friends were teasing him constantly, saying that he was wasting his time -- that even if he was accepted, he'd never last. He and his friends all knew people who had left for America and come back to Turkey, unable to continue their studies. Mustafa proved them wrong. He was accepted by Western Reserve University Hospital in 1955 -- and he came here, and he stayed despite tremendous obstacles.

"My father went to the airport to leave for America," said Mehmet, smiling. "His mother, my grandmother, wearing a burqa, accompanied my father to the airport and insisted on speaking to the pilot. So they dragged the pilot out of the cockpit--you can just imagine this: the captain doesn't want to be bothered by anybody -- and my grandmother says, 'Please take this brown bag. It has my son's lunch. I want to make sure you give it to him. And I want you to take this big plane and fly it very, very slowly, stay low to the ground.' That was a story my father has told many times in his life. It's difficult to imagine, growing up in a place where there are no automated vehicles period, and the next thing you know you wake up in Cleveland, Ohio. But this man was willing to make that move."

Mustafa arrived in Cleveland in June 1955, unable to speak English and without a friend or family member to guide him. He was nonetheless able to persuade school officials that they should let him stay. Part of this was sheer luck. At that time, America was experiencing a shortage of physicians, and doctors from other countries were being recruited and accommodated wherever possible. Nonetheless, luck was not the only factor in Mustafa's success. He clearly had great talent and personal charm. He also encountered people who were willing to help.

"They quickly realized," said Mehmet, "that either my father couldn't read the application or he had falsified it, because he didn't speak the language. Actually I think he didn't understand the questions even. But they figured, 'You know what? We already paid for him to come here, and he seems willing to work.' And so -- and he tells this story with tears in his eyes -- on his first day, he was paged, and he hears, 'Dr. Oz.' So he picks up the phone, they say something to him, he has no idea what they're saying, and then at the end they say, 'Hang up.' And he's thinking, 'Well, what does that mean -- hang up?' So he held the phone up. In the air. And they said, 'Dr. Oz, hang up the phone!' So he got on a chair and held the phone up to the ceiling, wondering what the heck else could he possibly do to get the phone up. He knew the word up but nothing else that they were saying to him. And he held it up until a colleague of his came along -- and this is I think what has in many ways colored his experience in America: there was so much completely unwarranted kindness. I think it speaks beautifully of our culture. A man who was walking by said, 'Dr. Oz, it's an idiom,' and he showed him how to hang up the phone. And that's how he learned.

"You know, he had many experiences like this," said Mehmet, amazed at the thought of the treatment his father received from strangers who had probably never met a Turkish person in their lives. "At my parent's wedding, they had no money, but a patient of his paid for his honeymoon. People just wanted to help other human beings. I think one of the things, if I look across the world -- and I've traveled a lot -- that really differentiates America in a very positive way is that we've always realized that because we're immigrants, and someone stepped up to help us when they didn't need to, that we need to give back. We need to pass it on."

Henry Louis Gates, Jr. is the Alphonse Fletcher University Professor at Harvard. He has written twelve books and produced and narrated ten documentaries. His new series, Black in Latin America, airs on PBS in April.