Drug abuse is a scary thing. To further illustrate that point, Rehabs.com has posted a follow up to its anti-methamphetamine campaign "Horrors of Meth."

"Faces of Drug Arrests," a new series of shocking images, depicts the decline of different suspects physical appearance over the years via their mugshots. The individuals shown were all arrested for drug and drug-related offenses involving meth, heroin, cocaine, and prescription drugs.

It's worth noting that some of the changes in these suspects' faces could be due to natural aging, and other issues, such as hygiene or illness, could contribute to the dramatic transformations captured in the series. As Rehabs noted in their disclaimer:

There is little arguing that the effects of street and even prescription drug abuse can dramatically alter a person's physical and mental state, sometimes irreversibly... The deterioration seen in consecutive photos is not necessarily the direct result of drugs or addiction, though in aggregate, it becomes clear that involvement in illegal drugs often brings with it a rapid and tragic physical decline. 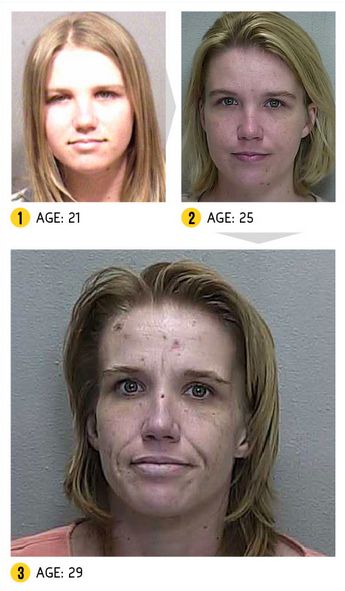