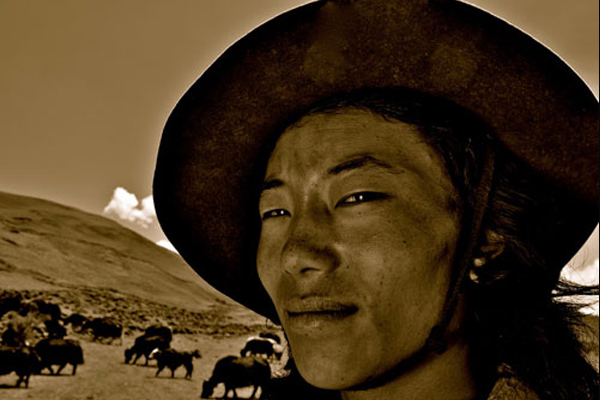 The Tea Horse Road, one of the globe's oldest journeys, is only now being recognized for its endurance and its contribution to the history of the Himalayas and ancient China. Over three thousand miles through some of the most daunting terrain on Earth and a history of 13 unending centuries of trade have placed it amongst the greatest odysseys made by man. Asia's eternal green commodity, tea, was hauled along its paths aboard mule, yak, sheep, and mortals' backs to satisfy an unending thirst within the grand spires of the Himalayas that ultimately spread across Asia to the rest of the world.

The route itself, a mere hint of a trail at times, hosted caravans and migrants as far back as the seventh century and saw traffic until the late 1950s. Fearless muleteers called lados (literally meaning 'hands of stone' in Tibetan) risked their lives against blizzards, thieves and starvation upon the world's highest plateau to transport this treasured commodity.

Far more than simply a trade route of tea, many called the pathway the 'Eternal Road' for its timeless vitality and its multi-faceted host of migrants, brigands, traders, and wandering monks. A highway through the sky that transported commodities, news, DNA, and that eternal currency: a stimulant green leaf, tea. Beyond all else, the route needed people to give and maintain its lifeblood.

Delve into this timeless route with this series of portraits featuring people inextricably linked to one of the most mysterious and brutal odysseys of the world of travel. Curated by the first westerner to trek the Tea Horse Road: author, modern-day adventurer, and Kensington Tours Explorer-in-Residence, Jeff Fuchs. 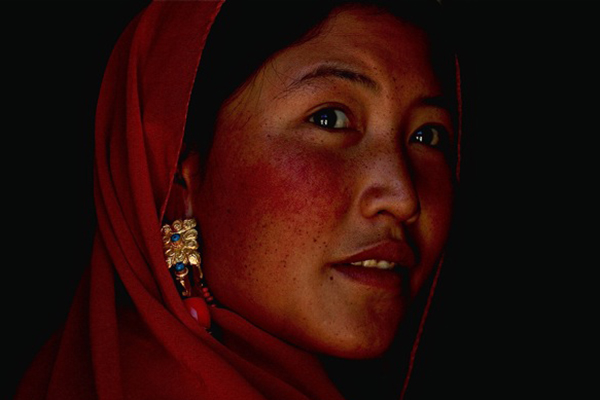 The Tea Horse Road extended from southwest China west through Tibet, down into Nepal and India and even further west into Central Asia. Traditions, trinkets, language and DNA all passed along its length leaving imprints from far off lands. Here a young Tibetan woman in eastern Tibet wears silks from distant lands and corals on her ears from the Bay of Bengal. The word for whisky for many on the Tibetan Plateau is 'arra,' which came along the trade routes from the Middle East, where spirits are referred to as 'arrak.' 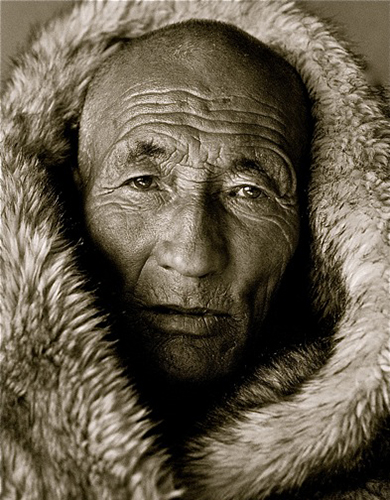 One of the last of the great traders who remembers a time when cargo took months to cross the great spine of the Himalayas. Tenzin told me that if I wanted to hear the tales of his life, that I must sit and listen. I sat for three days while he carefully searched his memories. Doing a rough calculation of his many expeditions along the caravan routes, it is a safe guess that he walked over 13,000 miles in his time. When I asked him of his journeys and how he coped, "there are no straight lines through the mountains." 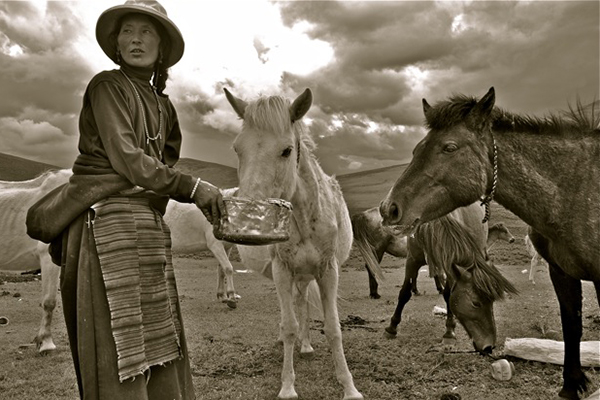 Though she herself wasn't alive to see the Tea Horse Road days fade, nomadic Omu remembered her own parents and grandparents speak of the days of trade and how even for her isolated clans, the caravans were welcomed. The caravans were often the only way that remote communities could access trinkets from the outside world. These caravans also provided a source by which nomads could sell their precious high mountain herbs and medicines. Omu's clan continues to follow in the steps of their ancestors and moves up to six times yearly with their herds. 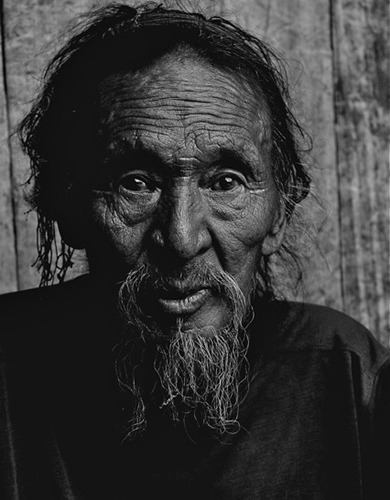 His face is as good as a map at expressing the rigors of a life carried out over three miles up in the sky. Feared and respected throughout the Himalayan trade corridors, Tenzin was a famed guardian whose task it was to escort the precious tea caravans safely. It was he who would guard the shipments of tea and salt and it was he who dealt justice to thieves and traitors. 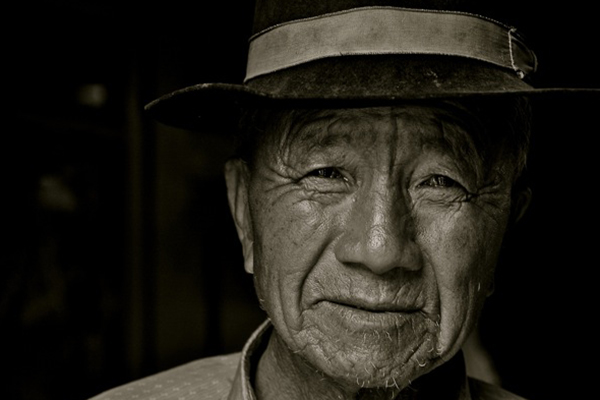 It was Dawa's prophetic words that saved our team from an almost certain death upon the notorious Sho'la Snow Pass. He had warned us not to underestimate the 'two faces of Sho'la' and how once we had committed to crossing over the pass, that we must not, under any circumstances, hesitate. Dawa became the human face of the Tea Horse Road as he had also spent much of his life on the trade routes. He introduced us to the vital nature that tea played in his world in northwestern Yunnan by telling us that, "If tea wasn't offered, a relationship wasn't offered". 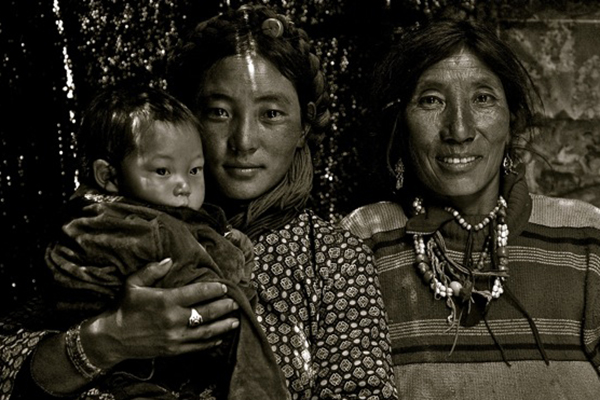 Three generations of women take a moment in their tent which rests at 4,600 meters in eastern Tibet. The elder woman, Tsomo, remembers how her father and his father before him supplied food and other essentials to caravans about to make the perilous journey over the great snow pass of Nup Gong La. One of the most crucial elements to the success of the caravans was the health of their beasts of burden and Tsomo spoke of the precious care that the rough traders took of their mules and yaks. 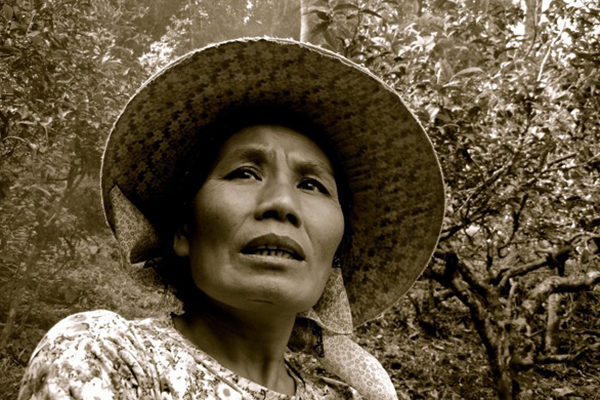 Deelee, a Hani woman in one of the bastions of ancient tea tree growth near Menghai, in southwestern Yunnan province. The forest behind her is comprised entirely of tea trees that are over 300 years old. It was from these sub-tropic mountain areas that tea was first harvested and exported along the tea caravan routes, on journeys that could take up to six months. Deelee and her family have uses for tea that are scarcely conceivable. It is their great panacea and is used for everything from an inflammatory to a tonic for the pancreas. In these regions, tea is no less than everything. 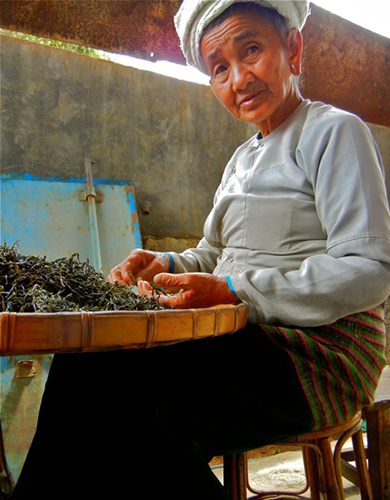 An 83-year-old Dai elder continues on the task she has done since she was a young girl. Harvesting, sorting, drying and producing tea is quite literally in the local's blood in southern Yunnan. The Dai, along with the Hani, the Lahu, the Pulang, the Jinuo and Wa all have centuries of tea history surrounding them. Each has their own traditions of serving, using as a medicine, and preparation. When asked the importance of tea, this elder laughed and replied, "It is everything." 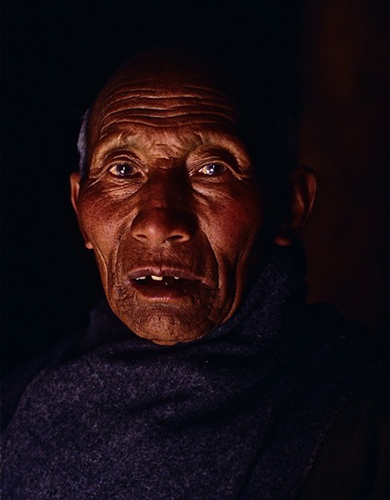 This elder confessed to stealing from the caravans in western Sichuan province over 50 years ago, though he admitted that he was fortunate to have not been hunted down by the caravan enforcers. Thieves would often target tea in the night and replace the missing bricks with earth so that the muleteers wouldn't notice the missing weight in the satchels. 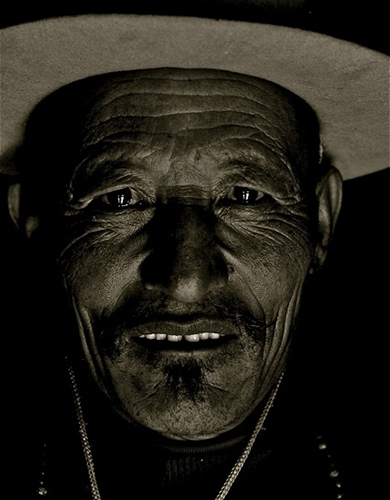 One aspect of the Tea Horse Road that is special is that so much of it is still an oral narrative. So much of the route, its people, and its stories have never been written down. Talking to people is the only way to find out more about its lifeblood. This man was the great-nephew of one of the biggest traders of the last century and he was quite happy to sit down in his nomadic home in western Sichuan and speak of the days of trade. In such a way histories (or at least versions of them) have been passed down from generation to generation and legends become just that.

About Jeff Fuchs: Jeff is an author who has lived most of the past decade in Asia where his work and research has centered on indigenous mountain cultures, oral histories, and an obsessive interest in tea. He gained prominence in the realm of exploration for being the first westerner to trek the daunting Tea Horse Road, one of the world's greatest trade routes. His book 'The Ancient Tea Horse Road' documents this 8-month ground breaking expedition covering 6,000 kilometers through the rugged Himalayan Mountains to uncover the mysteries of this vital route that has been so critical to the lives of the remote Himalayan people.

Voting Made Easy
Register to vote and apply for an absentee ballot today
Register now
More:
travelhimalayasChina
Newsletter Sign Up
An essential daily guide to achieving the good life
Subscribe to our lifestyle email.
Successfully Subscribed!
Realness delivered to your inbox