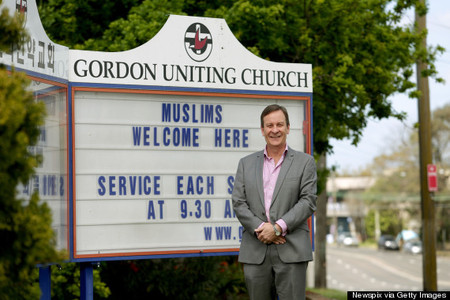 Pastor Michael Barnes of Gordon Uniting Church in New South Wales, Australia, said it best, "I have found connection with people of other religious traditions to be fascinating and stimulating. It has caused me to rethink many views on life, God and the future. While it can at times be challenging, it is very rewarding and, in our world, utterly necessary." Barnes uttered these statements after recently adding to the church's marquee, "Muslims Welcome Here."

A long series of sociological studies, starting with research undertaken to support the racial integration of troops in World War II, shows the effectiveness of dialogue and education based on the "contact hypothesis," which posits that interactions between disparate groups (provided those interactions are positive) serve to break down barriers and in time, forge friendships.

It's simple: if you belong to Group A and have a rather low opinion of people from Group B, things aren't likely to change if other Group A people tell you that Group B is fine. If, however, you have coffee or share a joke with a member of Group B, it becomes much more difficult to paint them with a broad, negative stroke. Your personal connection humanizes the dehumanized.

This is the formula followed by Seeds of Peace, a program that every year brings together several hundred teenagers from conflict regions such as Israel and the Palestinian territories for a three-week summer camp in Maine. A rigorous study by sociologists Juliana Schroeder and Jane Risen, reported in the New York Times, August 22, 2014 has proven that the program works--not just in the immediate aftermath of the camp, but also a year after the participants have returned to their (mutually hostile) environments.

That this same phenomenon occurs in the more commonplace circumstances of U.S. classrooms, houses of worship and civic organizations is demonstrated by the success of Islamic Networks Group (ING), a non-profit providing educational presentations about Islam and other world religions to schools, colleges, and other venues. While the environments ING deals with are, fortunately, not as hostile as those faced by Seeds of Peace, ING's audience engagements through the Islamic Speakers Bureau (ISB) likewise expose students and other audiences to what we might call "real life Muslims"--individuals who are far removed from the stereotyped villains common in film and television and from the images of "Islamist" terrorists that populate the news.

The effect is cumulative, of course, but even a single presentation from our Islamic Speakers Bureau (ISB) changes perceptions dramatically. Our pre- and post-presentation surveys in classrooms show that the percentage of those who see Muslims as "Americans like myself" increases by 54%. Even more importantly, the percentage of those who believe Islam promotes violence or terrorism falls by 70%.

Similarly, the common assumptions that Islam is inherently oppressive to women and that the religion is incompatible with Western notions of equality likewise fall in the face of personal encounter. After meeting American Muslim women in the classroom, the percentage of those who believe that Islam oppresses women falls by 75%. Face-to-face interaction is key for changing perceptions.

ING's Interfaith Speakers Bureau (IFSB) program, offering presentations by panels made up of Buddhist, Christian, Hindu, Jewish, and Muslim speakers, works by this same principle. After IFSB panels, audiences are invited to write responses to a number of evaluative questions, including some probing how the experience has changed their views of certain religions or of religious people. Typical responses to such questions are the following:

These responses point to the same result as with ISB presentations: hearing and interacting with presenters who practice the religion they speak about breaks down prejudice and builds understanding and respect, whether the group in question is Muslims, Jews, Buddhists, or religious people in general.

The bonds forged by interpersonal contact can last a lifetime, and hearing, in person, about the lived religion of an often-maligned group like American Muslims creates advocates for equality and dialogue. A lifetime of exposure to prejudicial narratives can be dispelled by one hour of personal contact.

Gordon Uniting Church in New South Wales has taken an important step toward building bridges within their own community. May their example spread to all corners of our globe so that face to face encounters like these take the place of the rumors and inaccuracies that fuel fear, misunderstanding, and hate.

Islamic Networks Group (ING) is a non-profit organization that counters prejudice and discrimination against American Muslims by teaching about their traditions and contributions in the context of America's history and cultural diversity, while building relations between American Muslims and other groups. To find out more about ING, visit www.ing.org