A smile and a frown mean the same thing everywhere—or so say many anthropologists and evolutionary psychologists, who for more than a century have argued that all humans express basic emotions the same way. But a new study of people's perceptions of computer-generated faces suggests that facial expressions may not be universal and that our culture strongly shapes the way we read and express emotions. 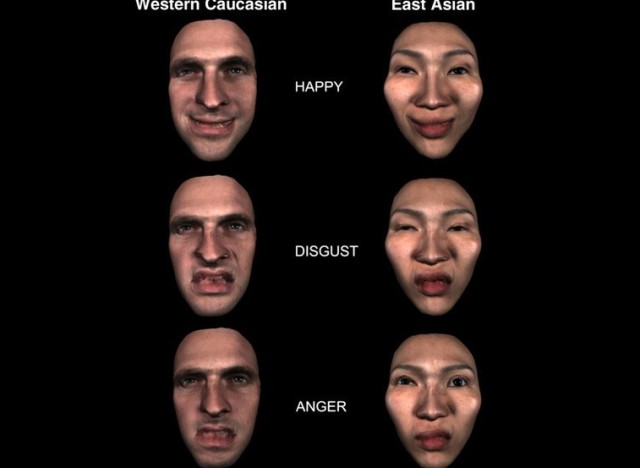 The hypothesis that facial expressions convey the same meaning the world over goes all the way back to Charles Darwin. In his 1872 book The Expression of the Emotions in Man and Animals, the famed naturalist identified six basic emotional states: happiness, surprise, fear, disgust, anger, and sadness. If facial expressions are just cultural traits, passed down through the generations by imitation, their meanings would have diverged by now, he argued. A smile would signal happiness for some and disgust for others. But that's not what he found, based on his correspondence with researchers around the world using photos of various facial expressions. So Darwin concluded that the common ancestors of all living humans had the same set of basic emotions, with corresponding facial expressions as part of our genetic inheritance. Smiles and frowns are biological, not cultural.

Or are they? Rachael Jack, a psychologist at the University of Glasgow in the United Kingdom, says that there is a fundamental flaw in the facial expression studies carried out since Darwin's time: Researchers have been using Darwin's six basic expressions as their starting point, and yet they were first identified by Western European scientists studying Western European subjects. The fact that non-Western subjects can recognize the emotions from photographs of those facial expressions has been taken as support for the universality hypothesis. But what if non-Western cultures have different basic emotions that underlie their expressions? Those expressions may be similar to those of Westerners, but with subtle differences that have gone undetected because no one has looked.

To test the true universality of Darwin's six emotional categories, Jack and colleagues used a computer program to create virtual faces with 4800 expressions. The program generated the faces by contracting virtual facial muscles, pulling the corners of the mouth up or down, widening or narrowing the eyes, and so forth. Half of the expressions were shown on a Western Caucasian face and half on an East Asian face.

Then Jack's team asked volunteers to decide which emotions the faces were expressing, if any. The researchers tested 15 recently arrived immigrants from East Asia, using a survey to ensure that they had spent minimal time around Westerners. They also recruited 15 Caucasian Westerners as a control group. For each of 4800 faces, the subjects could choose one of Darwin's six basic emotional categories and rate the intensity of the expression on a five-point scale. If they did not perceive a clear expression on a face, the subjects reported, "Don't know." If Darwin's basic emotions are universal, all the subjects should match the same faces with the same emotions.

That's not what Jack's team found. For Western Caucasians, Darwin's six basic emotional expressions popped right out of the data, in type and intensity. But the East Asian subjects didn't see the faces the same way, the team reports online today in the Proceedings of the National Academies of Science. Smiles meant the same thing to everyone, but the responses from the East Asian subjects did not form clear categories, especially for faces expressing surprise, fear, disgust, and anger.

The researchers conclude that Western Caucasians use a distinct set of facial muscles to express basic emotions. Each culture may have fundamental expressions, but they are not necessarily shared by other cultures. For East Asians, Jack speculates that facial expressions are built from other fundamental emotions, such as "shame, pride, or guilt."

The study is "a strong challenge to the widely held belief that certain emotional expressions are biologically basic," says Lisa Feldman-Barrett, a psychologist at Northeastern University in Boston. If wrong, that belief is doing harm, she says. For one thing, difficulty recognizing facial expressions is used to diagnose mental illness. For another, she says, "in the U.S. alone, millions of dollars each year are spent on law enforcement and security training to 'read' emotion in the face." But if those faces belong to people from different cultures, their emotions and intentions may be illegible.